Trade missions to tech fairs are very useful for start-ups. This was evident during the Finnish trade fair Slush, where 4TU.IMPACT held the finals of the past Impact Challenge. Several start-ups from the four participating Dutch technical universities (4TU) traveled to Finland. The participants were able to expand their networks there as well as come into contact with investors.

This is why 4TU is now also joining two missions that have been organized by the Netherlands Enterprise Agenc (RVO) to Viva Technology in Paris and Collision in Toronto, Canada.

A combination of factors

One of the start-ups taking part in Collision is Moovd. Co-founder Menno Kamphuis has a dream: within five years, he wants his company Moovd to significantly contribute to advancing the digitalization of healthcare around the world. He is well on his way. Within the space of two and a half years, the company has grown from two to sixteen employees, treated around six thousand people and has clients in America, Australia, Germany, Belgium, France and the Netherlands. Kamphuis now wants to explore the Canadian market.

The ‘Insightful Innovators’ series is an initiative of 4TU.Federation and Innovation Origins. This is where you can read the stories behind entrepreneurial students at the four Dutch technical universities and their ambition to make the world a bit more beautiful. They are the driving force behind innovation in the Netherlands.

Read the other stories in this series here

As to why the start-up is growing so fast, Kamphuis can’t pinpoint one single reason. “It’s a combination of factors: being able to rally the right people around you, hiring the right people, forging great partnerships, getting important customers on board, amassing success stories.”

Kamphuis has a background in business administration. After graduating from the Saxion University of Applied Sciences in the Dutch town of Enschede, he wanted to do something about the problem that many people all over the world are facing, i.e., poor access to mental healthcare. Together with his brother Sander (who is also a management graduate) he had an idea to integrate digitalization within healthcare.  After a successful pilot with a number of large trauma clinics in the Netherlands, the pair decided to start their own company. In early 2020, they registered Moovd with the Netherlands Chamber of Commerce.

Moovd digitalizes the use of therapies such as exposure therapy and Eye Movement Desensitization Reprocessing, also known as EMDR therapy, as Kamphuis describes it. How does it work? A therapy like EMDR is all about helping people to process shocking events. “In this therapy, a therapist has to rev up a client’s working memory, so that the memory of a shocking event breaks up into the long-term memory.”

That process costs him a lot of time and is grueling, Kamphuis says. “A therapist is constantly moving or snapping their fingers in the process. While doing that, they are giving the client instructions. That whole process is set out in a protocol. We have digitalized that protocol.”

A program can be accessed from a laptop or a smartphone to give the instructions. “A bit like a game.” Moovd’s algorithm measures a person’s reaction times and optimal working memory capacity and adjusts the instructions accordingly. In a sense, the program takes over from the protocol. This allows the therapist to focus on the other parts of the process. “They can then focus on the real problem, as in the memory that the client experiences as awful.” 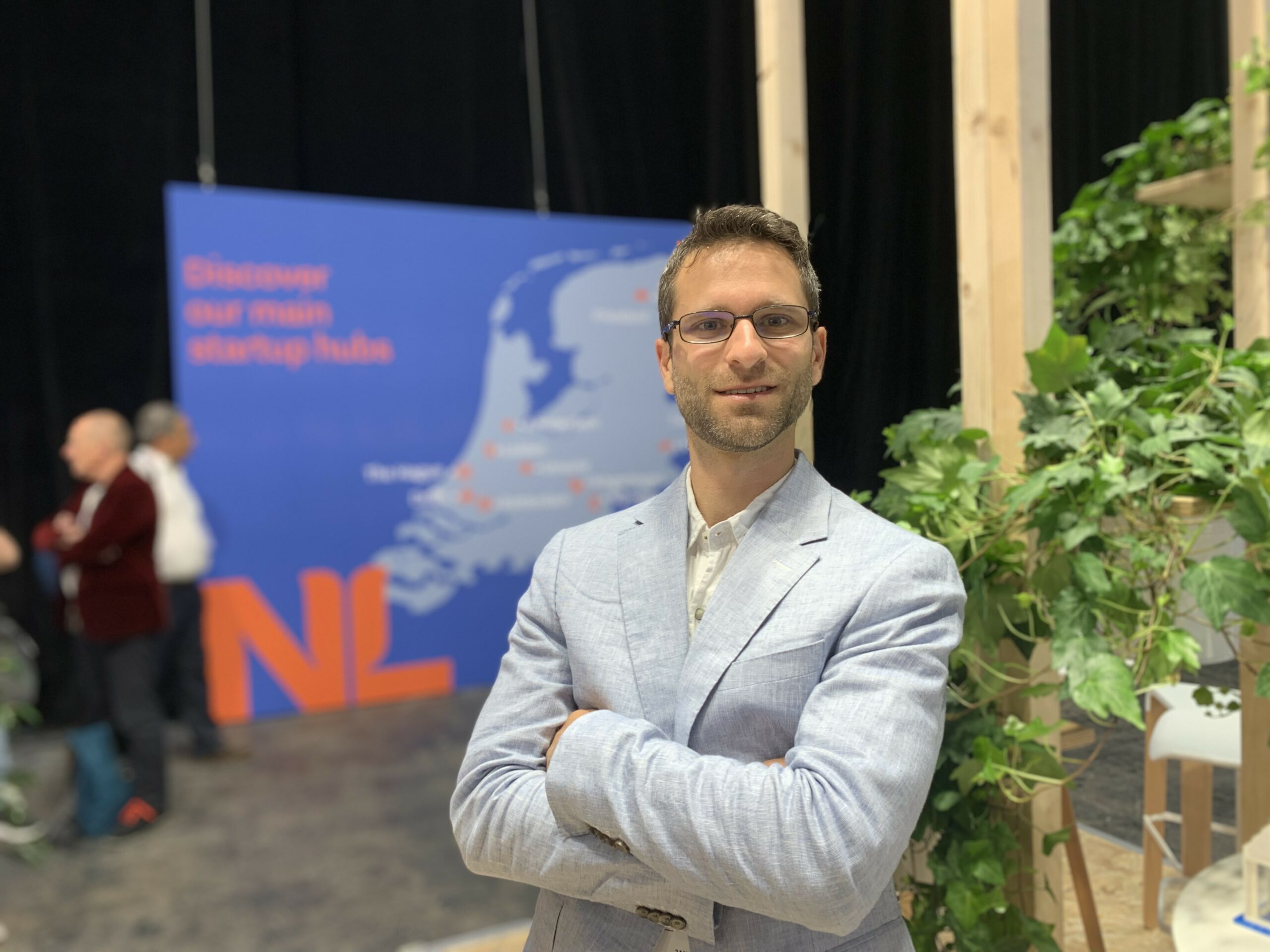 Trade mission for start-ups serves as a valuable meeting point for contacts close to home – Innovation Origins
The Delft start-up Nature’s Principles is part of a trade mission to the Viva Technology technology fair in Paris this week.

Exposure therapy confronts people with their fear, trauma or phobia, Kamphuis goes on to explain. “We also do that digitally. People can confront their fears by using their own laptop or smartphone. Or, if they have a pair of VR glasses.”

Moovd developed the therapies together with therapists from the field. However, according to Kamphuis, “We’re getting a lot of positive reactions. People can really see that this is the future.” According to Kamphuis, digital therapies are not the solution to the challenges in healthcare. “There is a huge amount of pressure on the healthcare sector. We have long waiting lists, and there is so much pressure on the therapists themselves. As a result, the drop-out rate among these professionals is extremely high, and clients are not getting the right treatment. Our solution tackles part of this problem.”

“We’re getting a lot of positive reactions. People can really see that this is the future.” According to Kamphuis, digital therapies are not the solution to the challenges in healthcare. “There is a huge amount of pressure on the healthcare sector. We have long waiting lists, and there is so much pressure on the therapists themselves. As a result, the drop-out rate among these professionals is extremely high, and clients are not getting the right treatment. Our solution tackles part of this problem.”

“It was through Saxion University of Applied Sciences that Kamphuis came into contact with Novel T, which is also linked to the University of Twente. “Novel T has a large network. If you have a question, they help you or refer you to someone else. For examples, they can help you with contracts. There are also trade missions with the Netherlands Enterprise Agency (RVO). We went with them to Slush in Finland back in December. That was really cool. You come into contact with people who are at the same stage as you.  They all have their own company and they are all there for the same purpose: to see if there are any international clients and if you can come into contact with investors.”

Last week, the start-up journeyed to Collision in Toronto as part of the trade mission. While there, Kamphuis wanted to explore whether the Canadian market would be interesting for the start-up. “Our goal was to understand how the Canadian healthcare system works,” says Kamphuis after the trip. And that goal was more than met. “Beforehand, we knew precisely who we wanted to talk to. RVO and the 4TU both helped us to make contact. Networking practically took place on its own accord during the mission.”

Kamphuis spoke with health insurance companies, hospitals, healthcare institutions, and national and municipal governments. “It’s a very interesting market where health insurers don’t play as big a role as they do in the Netherlands.” The entrepreneur received rave reviews about the digital therapies. ” Even from American visitors. They really see this as the next generation for healthcare.”

If and when Moovd will venture into the Canadian market remains to be seen. Kamphuis will continue discussions with the contacts he has made. “The question is whether the Canadian healthcare market is ready yet for this method of providing therapy. They are a few years behind in Canada compared to us.”

This story is the result of a collaboration between 4TU.Federation and our editorial team. Innovation Origins is an independent journalism platform that carefully chooses its partners and only cooperates with companies and institutions that share our mission: spreading the story of innovation. This way we can offer our readers valuable stories that are created according to journalistic guidelines. Want to know more about how Innovation Origins works with other companies? Click here

Trade mission for start-ups serves as a valuable meeting…
Holland High Tech is cashing in on opportunities for the…
'Quit your job for one day a week'
Universities should keep an eye on innovative and cheaper…
Hable wins 4TU Impact Challenge with braille keyboard for…
Politics, employers, and students will soon demand a truly…