If there is one category of companies that are responsible for innovation in the Netherlands, it would have to be the start-ups. Innovation Origins is always looking for relevant innovations, therefore there is every reason to really capture the complete Dutch start-up ecosystem. Armed with the data sets of  StartupDelta, we visited all Dutch provinces. In 14 episodes, published between December 24, 2018, and January 7, 2019, we’re giving an overview of the start-up ecosystem in the Netherlands. The series has been made by the journalists of cooperation PitchProducties, commissioned by Innovation Origins. Today: Noord-Brabant. Read the other episodes of the series here (as far as already published).

The province where the lights are always on and the good times never end: Noord-Brabant. Who knows, this province might just be the best place to establish a start-up. New companies are invested in heavily, there are plenty of incubators and accelerators (of which HighTechXL is the best known) and in several cities, the most favourable climates are created to let start-ups grow. There are many promising initiatives, but there’s still a lot of profit yet to be achieved.

When thinking about start-ups in Brabant, often and mainly, Eindhoven comes to mind. This city with campuses like the High Tech Campus Eindhoven (HTC), the University Campus and the Brainport Industries Campus (BIC) is the engine of the start-up industry in Brabant. “When companies want to bring their enterprise to the market commercially, they’re at the right place with us,” says Paul van Son, marketing manager at the HTC. “There are now 45 to 50 start-ups located at our campus alone,” he says. A part of those is located in the recently opened High Tech Plaza, presumably the largest start-up hub of the country and the place where many HighTechXL alumni take their first steps towards the market.

According to Van Son, Eindhoven is the perfect place to launch technology start-ups. “Because the Technical University is here, a lot of new tech-companies are born here as well. There’s very specific knowledge here.” Besides, several multinationals are also located in the city, think of ASML, Philips, Intel and NXP. The start-ups can learn from the big companies and the other way around. “Start-ups are much faster and more flexible with innovations than the big companies. Then again, big companies have a lot of knowledge and a large network. It’s therefore not a matter of ‘competing against each other’, but more a matter of ‘learning from each other’,” says Van Son.

In the map below, all start-ups established in Noord-Brabant after 2005 are represented based on data of StartupDelta. These companies have 2-50 employees. It’s clear to see that they’re spread across the whole province, but most of them are located in the cities, mainly in Eindhoven. Zoom in for details.

The High Tech Campus calls itself ‘the smartest square kilometre of the Netherlands’. Eindhoven offers a lot of innovation opportunities. 71% of all funding goes to Eindhoven, research of StartupDelta shows. But Brabant is bigger than just Eindhoven. Although the city clearly profiles itself as the start-up city, in a lot of other places in the province, young companies are invested in. Since this year, there’s the collaboration program Braventure. This alliance specifically focuses on start-ups in Brabant and cooperates with the university of Tilburg and the Technical University Eindhoven, several academies, the province of Noord-Brabant, and a number of six companies that focus on the promotion of start-ups and innovation.

Also read our series about innovation clusters (campuses) in Brabant.

According to research by Buck Consultants, There’s no province with more mature innovation campuses than Brabant. These are the eight top ones:

One of the financing and investing organisations that want to promote innovation in Brabant is the BOM: Brabant Development Agency. BOM helps start-ups when they need support in their initial phase. There’s also the Brabant Start-up Fund (BSF). They both invest in the development of young companies throughout the whole province, where the BOM follows up on BSF after the early phase.

The funds are hoping their investments will tempt others to finance in later stages. There’s a lot of mutual cooperation: “In terms of supporting start-ups, there’s a close association in the whole of Brabant,” says Bram van den Hoogen, marketing communications manager at the BOM. And this pays off. “Brabant sticks to its strengths. The growth figures of the economy were 3.7 in 2018 compared with the national average of 3.2.” Eindhoven stands out even more with 4.9%. 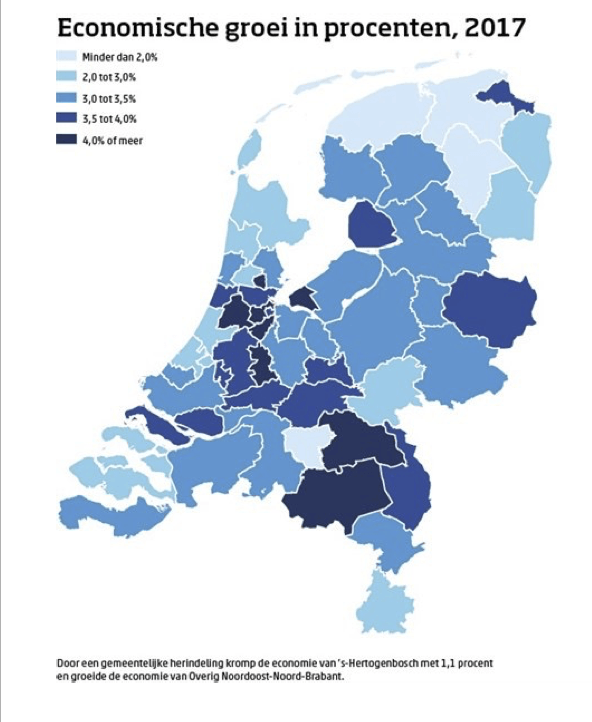 The typical pleasant atmosphere of Brabant seems noticeable in the mutual collaboration. There is a joint effort to get start-ups off the ground. By means of information, events and funding, the climate is made as fertile as possible. “Many young entrepreneurs are facing the same problems and challenges. It would be a shame if everyone tries to invent the same wheel individually. Through a mutual exchange, always able to ask for help and collaboration, everyone will eventually make progress,” says Denise van Eekere, project manager of Brabant Start, a platform for all starters in the province, so also for start-ups.

“It would be a shame if everyone tries to invent the same wheel individually.”

“Brabant is an economically strong province with its ‘own DNA’ and its own distinctive factors,” says the spokesperson of Bert Pauli, deputy Economy and Internationalization of the province. Especially when a start-up focuses on the medical (technological) industry, Brabant is the designated place to settle. “In absolute numbers, the list is supplied by the HTSM companies,” Van den Hoogen says on behalf of the BOM. These are companies that focus on technology in the broad sense. “Closely followed by life sciences and software.” This also includes start-ups that focus on medical technology. 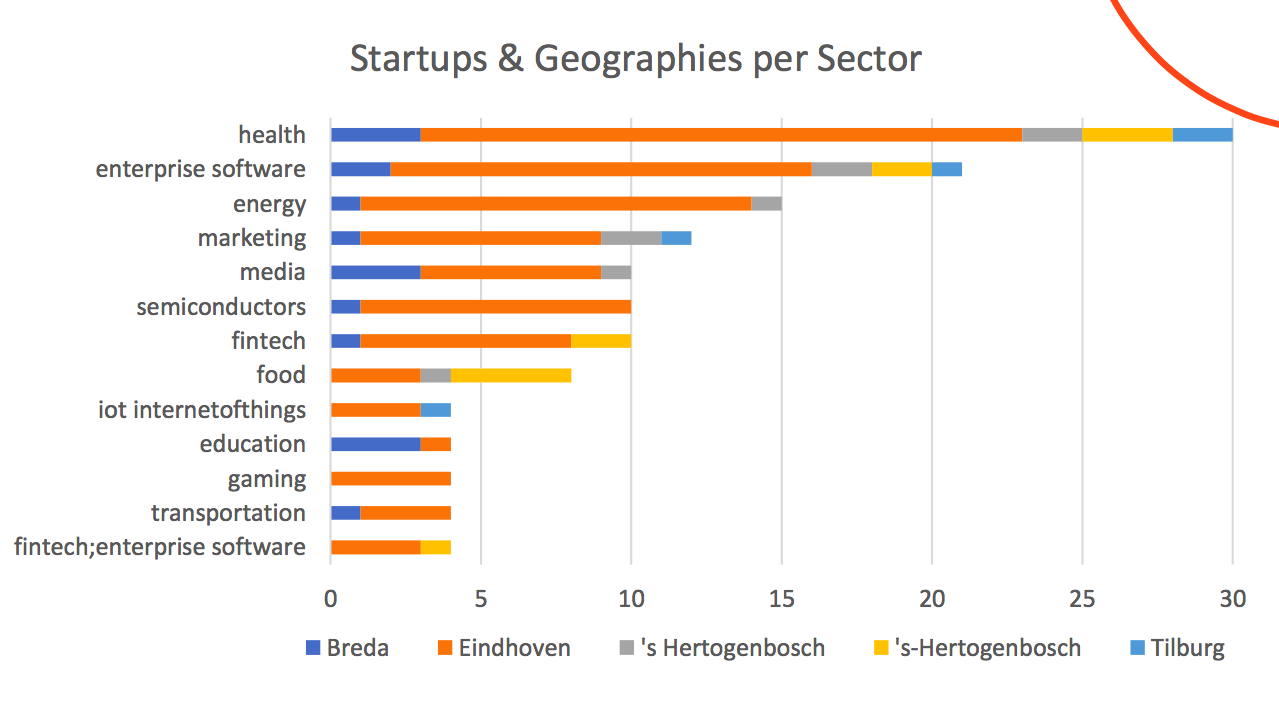 Disadvantages in the south of the country

Although the region has a lot of success, Paul van Son of the High Tech Campus also thinks that being located in Brabant has a disadvantage: “When a start-up from abroad starts looking at the Netherlands, they often first look at Amsterdam.” If entrepreneurs don’t know Eindhoven, and they’re not informed about it, opportunities get missed.

Gerda Geerts, of start-up HoCoSto, mentions another disadvantage of Brabant as a location: “When the moment comes for us to really want to grow further, we might have to move to another location.” Her company was one of the winners at the Brabant Startup Awards and is located in the west of the province, in the village of Achtmaal, by the Belgian border. “Logistically, it’s not always convenient to be here. If we really want to expand or if we want to attract new, highly trained staff, it’s going to be difficult here in the countryside,” says Geerts. There are no trains going to Achtmaal and it might be easier to move to a bigger city in the future.

“When a start-up from abroad starts looking at the Netherlands, they often first look at Amsterdam.”

However, Geerts is pleased about the events that are organized in the province: “Of course, Amsterdam has more start-up events, but there are plenty of them in Brabant as well.” She does plead for better guidance after everything has come off the ground. She believes that too much value is attached to financial prognoses, and there’s a dangerous hole companies can fall into, after the first steps have been taken. “It’s especially difficult when you want to bring a new product to the market. Investors first want security before they go on board.”

This makes it hard for start-ups to experiment and many companies, therefore, get stuck. This, however, isn’t only a problem in Brabant, it’s something that, according to Geerts, should be arranged differently in the whole of the Netherlands. In the future, it would enable young start-ups to gain a foothold in the south of the country even better, develop further and make the whole province flourish even more.

Innovation and ecosystems: nature shows how it can be done
Journalists are writing in a more nuanced way about AI, but…
Intercultural Dialogues between Dutch and Chinese…
Holland High Tech is cashing in on opportunities for the…
Corona in Europe - It's been a blast!
China 2022: Business under Dynamic Covid-zero Policy