We shall consider various issues such as sustainability, developmental phase, practical application, simplicity, originality and to what extent they are in line with the Sustainable Development Goals of UNESCO. They will all pass by here and at the end of the week, the Start-Up of the Week will be announced. Moreover, our weekly winners may be awarded another prize. Because at the end of each calendar month, our readers, together with the editors of IO, will select the Start-up of the Month! 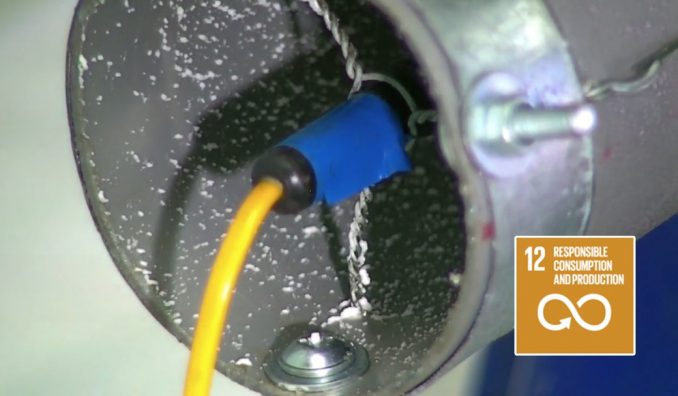 We mainly know fridge magnets as a decorative item on the doors of our dull white goods. Although they often add a personal, feel-good touch and can be practical for shopping lists, they remain primarily a cosmetic feature of a refrigerator. Up until now that is. Did you know that magnets actually can play a prominent role in a refrigerator? And not just any role but the absolute leading role, in any case if it is up to Magnotherm. This German start-up addresses refrigeration in an entirely novel way.

And it is not just limited to refrigerators. Air conditioning and freezers can use this method to carry out their cooling function as well. This is a lot more environmentally sustainable than the gases that are still currently in use. Those gases are flammable and make a significant contribution to our ecological footprint. In fact, those greenhouse gases are more potent than carbondioxide.

How does it work? Think of it as a kind of microwave, except precisely the other way around. Bonus points by the way for the founding father who goes by the name of Max Fries! His name will no doubt delight English-speakers when they hear what kind of work he does. 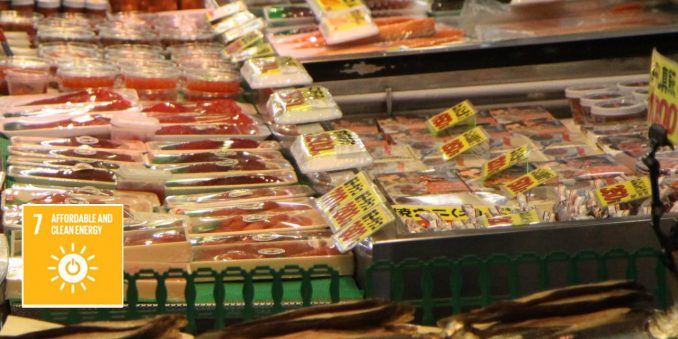 Now that winter is approaching, cooling is apparently totally cool. Because this second start-up also has something to do with this branch of industry. Now, however, they are not magnetic coolants, but cool air cooled by … air. The Ukrainian team behind DAC was greeted with furrowed brows when they asserted that they could pull off this neat trick. It was said to be a Harry Potter magic spell that would only work in fiction. Yet nothing could be further from the truth. Collaboration was sought with the Czech Pavel Panasjuk and now they want their idea to become a reality. Because why would you use any polluting gases, when you can also use air to cool things?

The entire cooling process avoids the use of any greenhouse or toxic gas. The air is cooled by itself with a kind of kinetic reaction of the gases that can be found all around us. And this works better than you might think. These cool ‘wizards’ are able to lower the temperature of their immediate surroundings by 60 degrees within one minute. At the moment they are looking for investors who have no faith in hot air or castles of air, but who do have ears for a cool castle built on concrete ideas. 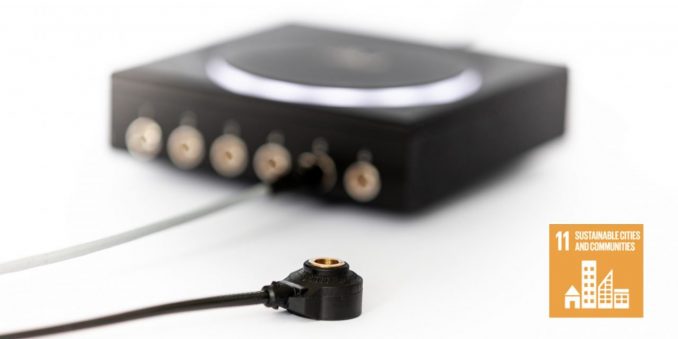 Neuron Soundwave – An ear for equipment

“Appreciate it, fix it!” – that’s the slogan of the most recent public campaign in the Netherlands. Why? People throw away far too much stuff that might just as well be repaired. Great excuse to buy a new one, right? Still, repairing something is not just easier on the wallet, but it’s a sustainable option as well. Equipment breaking down nonetheless never happens at a convenient time. Frequently you don’t find out that there’s something faulty until it stops working. If only there was one system that could tell you exactly when something is about to break down. After all, prevention is better than cure. Neuron Soundwave was created for this very reason. This Czech system ‘hears’ when a part of a nearby device is about to fail.

Mechanical parts that are almost worn out have a different sound signature than brand new parts. As a rule, a human ear cannot really distinguish that. But it is now child’s play thanks to the self-learning system from Neuron Soundwave. It’s very simple. You put the Neuron Soundwave receiver in a room, and it provides an ear that listens to the devices that surround it. When the receiver recognizes an anomaly, it alerts the user via an e-mail or a text message. A device rarely breaks down on its own accord, often it’s the result of an earlier process. This astute listener is connected to the futuristic Internet or Things so that no one else need be involved in the intercommunication. Moreover, it is capable of being self-taught as it shares the data with all the other Soundwaves. These are are all underpinned by an algorithm that is increasingly becoming capable of recognizing malfunctions of various equipment. 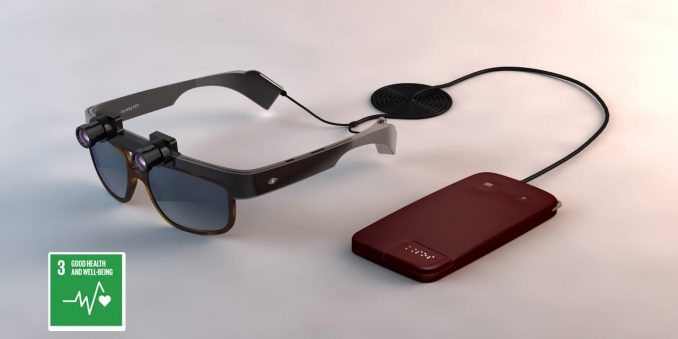 Eyesynth – I hear, I hear what you don’t see

Actually it’s quite strange that we know more about distant galaxies than about our own grey matter. Thankfully, in recent years innovation has made it possible for us to find out more and more about the workings of certain processes. These can be foreseen. An example of this is Eyesynth, which gives blind people the opportunity to see with 3d glasses by listening. Hearing the appearance of objects? No, this is not a hallucinogenic drug but rather futuristic technology. In the human brain, senses are constantly working together in order to perceive something. For the Spanish start-up Eyesynth, the principle that they focus on is called synesthesia. This means ‘crossed senses’ and causes sensory perceptions to flow through each other. This allows us, for example, to smell certain colors or visualize music. Okay, maybe it is a bit like hallucinogenic drugs …

Babies are 100% synesthete. As a person gets older, this trait disappears in most people. About 14 percent of the adults have a (light) form of synesthesia. These are often quite creative people. Eyesynth’s 3D glasses mimic this effect. Some very encouraging preliminary tests show that it seems to be a godsend for the blind and visually impaired. The data from their surroundings are converted into sound by this technology, creating a geometric ‘shape’ in the brain. The wearer then associates this sound with a specific object. Does it work? Absolutely! Even very small details can become visible. For example, even those who have never seen daylight are able to transform into veritable visual thinkers. Sounds a bit like a superpower, don’t you think? 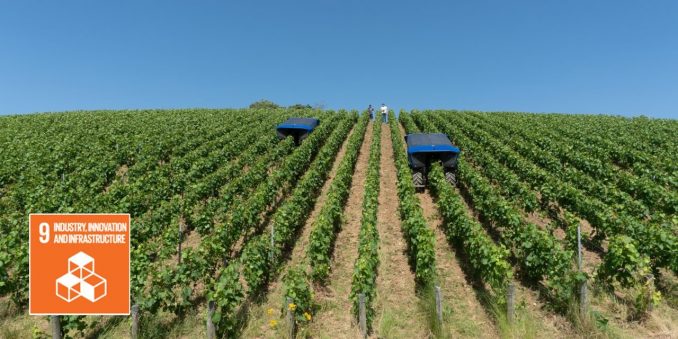 Vitibot – the winegrower on wheels

The start-up VitiBot is perhaps the biggest nightmare for hedonistic travelers who want to do vacation work in a southern European vineyard. Whereas automation in agriculture has been rapidly spreading over the past few decades, winegrowers still rely on manual labor and fossil fuels to keep things ticking over. Surveying grapes, harvesting them and then stamping them into a pulp has been done by people for centuries and requires many helping hands. Where does this start-up happen to come from? No, for once we won’t pull the wool over your eyes. As it happens, Vinibot simply comes from France.

Vitibot designed a smart autonomous winegrower with the very congenial name of Bakus. It works completely autonomously, can be used 24 hours a day and is very energy efficient thanks to its electric motor. Bakus has already undergone a considerably lengthy developmental process and does exactly what a human winegrower with a lot of experience can do. Will there come a time when robots do all the dirty work on the vineyard while people just relax and enjoy the wine? This might just happen!

An entire fleet of these kinds of mechanical Ilya Gort’s will have to be built in the coming years. And the first signs of this perhaps happening are quite auspicious for these French guys. They have already secured their first substantial financial investment this year. In the coming period, a further investment of millions is called for from European funds and venture capitalists. The aim is to have the product on the market within two years and in this way help move wine production into the 21st century. No doubt the traditional images of harvesting, stamping and subsequent wine tasting will go down in history. But is that such a dreadful thing? The pleasure of wine is usually not really in the drawn-out production process, but rather in the final product. Speaking of finished products, Vitibot is almost ready for the market. Is this the new chapter for grape cultivation? Only the future can tell us that. In any case, they have our confidence with our Start-up of the Week incentive prize. Santé!