Cities are getting busier and the streets are getting fuller. A car offers less and less of a solution. On Google Maps the bicycle always turns out to be the fastest means of transport in a city, says industrial designer Valentin Vodev of the start-up Vello Bike. He has built an intelligent folding self-charging E-bike and wants to solve mobility problems in the urban space.

The first version of the Vello Bike was created when Valentin Vodev and his partner Valerie Wolff traveled to Cuba in 2010. They wanted to take bicycles with them so that they could travel there independently. Vodev built two folding bikes. “This offers different access than renting a car does. We’ve almost become part of this country,” he explains. The Cuban trip became a kick-off for the start-up. They were so convinced of the function of the folding bike that they wanted to pass on this experience.

What is your motivation? What problem do you solve and why is that important?

Our folding bike brings back freedom in the city’s limited room for maneuver. It takes its owner everywhere and can also be used in combination with other means of transport. Both for ‘the last mile’, and for the entire journey.

What was the biggest obstacle you had to overcome? Was there a moment when you wanted to give up?

Usually, it’s the unexpected things that put you back. But it’s never been so dramatic that we wanted to give up. The product is our flagship. But the structure that we had to incorporate into the commercial implementation has challenged us more than if we were employees of another company. The competition is global. You have to survive in the international market.

What were the best moments so far?

That we have been able to do something that also appeals to the mobility vision of a person on the other side of the world. The Japanese, South Koreans and Chinese want our folding bike and accept that it has to be shipped over 15,000 kilometers. This means that we have created added value.

What achievements have you been really proud of?

It took us three generations of our bike to get the folding mechanism really right. The combination of lightness, compact foldability and ride efficiency makes Vello Bike unique. With our self charging device, we have redefined the e-bike. You only use energy for a short time when it’s needed – and give it back when it’s not needed. During descents, braking and tailwind, the battery can be charged to almost 100 percent. A built-in tilt sensor already reports a variation of one percent. On a slope, the energy supply is reduced. Another sensor detects when the user steps backwards when rolling out and activates the energy supply to the motor.

What can we expect from you in the coming year?

We want to expand the application possibilities for the product and focus on accessories. For example, we want to develop a carrier with a high load-bearing capacity.

Where do you want to be in five years time – what is your highest goal?

It would make us really happy if we could reduce car traffic in the city. Not by means of a top-down regulation, but by means of mobility products that make sense and that change the behaviour of users. Everyone knows that things cannot go on like this. The cities are densely built-up and we are sacrificing all public space to the car, which we use only 90% of the time. When a road is car-free, the air improves and the children can play on the roads again.

What makes your innovation better / different from existing things?

Our bike is more intelligent to use. It is the lightest compact folding bike and has a recuperative energy system in the electronic version. Despite its small mass, it rides better than conventional city bikes. Folding bikes normally are a bit shaky. We have avoided this problem by not hinging the frame, as most folding bikes do. Instead, the junction is where the shock absorber is located. To compensate for the small wheels, we have increased the wheelbase a little. This way you get the same distance with the same cadence as is the case with large wheels. 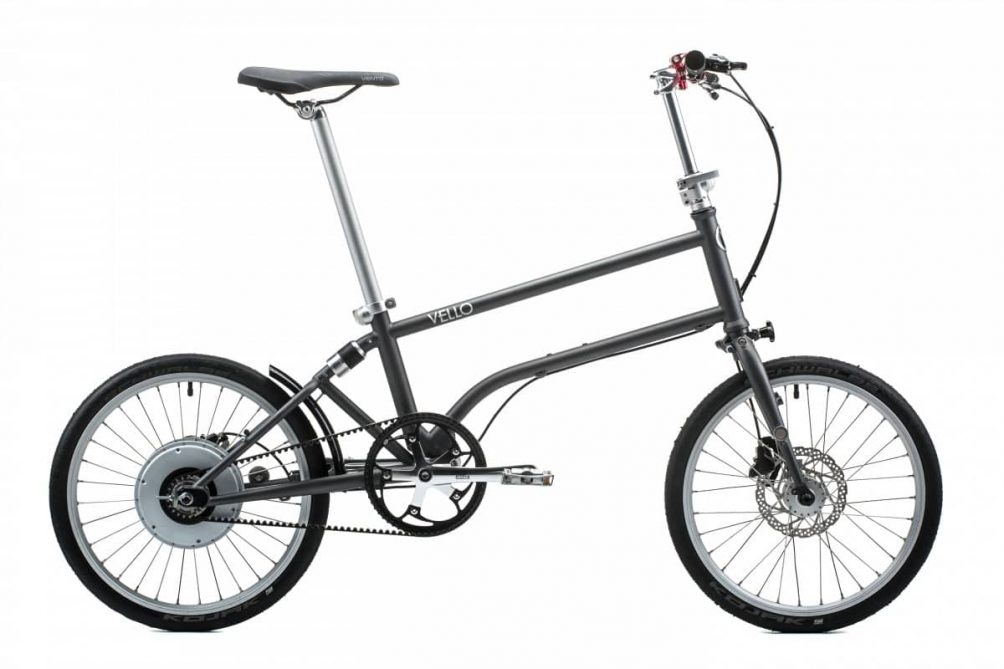 Co-founder Wolff studied Economics and film at Bard College in New York and studied at Diplomatic Academy in Vienna. She later worked for the UN and other international organizations in project management and fundraising. At Vello Bike she is responsible for business development. Vodev studied Industrial Design at University of Applied Arts in Vienna and at Royal College of Art in London. The subject of micromobility has occupied him since his graduation thesis. Even then he came to the conclusion that the bicycle was the most efficient means of transport in the city.

Turnover: In 2018 the turnover was 1.5 million euros. Growth continues.

Product development takes place in Vienna, production partly abroad and assembly in Vienna – in cooperation with a company that helps the long-term unemployed back to work.

We are growing and need support in the areas of communication, logistics and sales.

Highest goal in a nutshell:

To convey the joy we ourselves have in the product to people with the same vision and thus change the world in a positive way.

Turn your city bike into an electric bike with swugo's…
Traivelling lets you book an international rail trip in one…
Stilride makes sustainable electric scooter using metal…
AORTA offers alternative to polluting delivery trucks in…
Salt as the key to a new energy grid: Cellcius wants to give…
Dortmund: where innovation drives community spirit
Manage Cookie Consent
We use cookies to optimize our website and our service. Help us to make our site better by accepting all cookies.
Manage options Manage services Manage vendors Read more about these purposes
View preferences
{title} {title} {title}