Mobilis Sound Beacon – makes cities easy and more accessible for blind people. Have you ever closed your eyes and tried to do something? Maybe you’re wondering how it feels to be unable to see the world around you. You probably opened your eyes after a few seconds and thought how hard it must be to live like that every day. Unfortunately, blind or visually impaired people can’t open their eyes just like that to see everything around them. There are nearly 200 million people in the world who are affected this way. We all know that their lives are very different and more complex than ours. Regrettably, even though we know this, we’re not always fully aware of this issue. That was the main reason behind setting up the Mobilis Sound Beacon project.

The company originally started in Ukraine and after a while relocated to Krakow, one of the major Polish cities. Mobilis is trying to empathize more with blind people. Pawel Gronski, an integration engineer at the company, says that the idea came about when they had the opportunity to meet a few blind people and familiarized themselves with their perspective.  “They usually use a white stick to move around the city,” Gronski explains. “We all know that, right? Generally speaking, they don’t have that many problems finding, let’s say, a building. What is really problematic for them is being able to get inside that building. Sometimes they find it hard to find the entrance.” 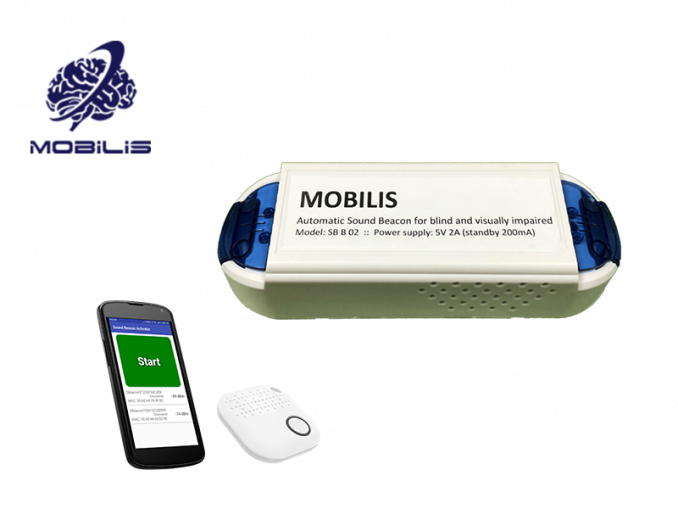 Gronski asserts that many cities are trying to improve their infrastructure for disabled people who, for example, use a wheelchair. Sadly, there aren’t that many solutions for blind people. The company wanted to resolve this. In order to do that, they created a beacon –a navigation device for blind or visually impaired people. The beacon emits a sound, which enables a person to locate the object they are looking for. The aim of the audio beacon is to simplify life for blind people and help them navigate government buildings, shops, schools, public transport entrances and so much more. The beacon itself is silent – it’s only activated when a user is nearby. It can be attached to doorways, traffic lights, and public transport vehicle doors, etc.

How did you come up with the idea for Mobilis?

Some of our team members know several blind or visually impaired people. Aside from that, we had a chance to meet a guy who has been blind his whole life and he is a very wise person. Plus, it feels great when you can help this community. Since, on the one hand, it really is a business. Whereas, on the other hand, it’s mostly helping those who are in need. This motivates us to keep improving our product. For example, we have planned some other projects. One of them is an autopilot system, like Tesla is doing, but then for a wheelchair. We’re trying to make life easier for people who could really do with some help.

Those people who are in regular contact with blind people say: ‘It’s great that somebody has given some thought to this.” An issue for us is that the government doesn’t realize how huge the problem is. Blind people point out that the government often does things without any consultation with them. That’s part of the reason why we want to help this community. Many of us just don’t see these blind people or don’t understand them. I used to be like that as well. Although, at some point, I started to see these people in the city and respond to them if they needed help. Now I’m more aware of the problems they’re facing every day. They’re just like us. As in, they use public transport, do their groceries, take a walk in the city center … It’s just a little bit more complicated for them than it is for us.

We also spoke with MPK (provided by Miejskie Przedsiębiorstwo Komunikacyjne S.A. of Krakow, a public transport service contracted out by the municipality). They found our idea really innovative and helpful. Although on the other side, there are people who are less enthusiastic about Mobilis because they just don’t understand this issue. So. there are two sides to the coin. We also went to the special school for blind people and their reaction was also extremely positive. They agreed that blind people encounter few problems when it comes to finding a structure – or, better said, a building. Instead, they tend to have a problem finding an entrance. Blind people normally take a route that they already know. They go to familiar places. They already know how to get there. The real problem starts when they need to go to an unknown place, take another bus, another route. It’s challenging for them because they have to remember all the crossings and other details of that route. Sometimes they just don’t feel like bothering others by asking for help.

What has been the biggest obstacle that you have faced so far?

I’m in charge of business development so the main obstacle for me was creating a network. I didn’t fully understand the Polish market, my Polish language skills – as I’m Ukrainian – weren’t that far advanced. It was hard for us to find sponsors. But in the end, we did it. So, to sum up, I’d say that the hardest thing for us was more related to the business side of the start-up, rather than the product itself.

Right now, we would like to focus more on expanding our business internationally.

Where will Mobilis be five years from now?

I’ll be brief in my answer. We want our beacon to become normal, standard practice in cities all over the world. We want to spread it internationally so cities become easier to navigate and more accessible for blind people.

In your opinion, what is the best thing that has happened thanks to Mobilis?

We had been working really hard and for a long time but didn’t seem to be seeing any results or progress. It was a little bit frustrating, so at some point, I said to myself: “Maybe I’m doing something wrong.” But then the first investors turned up. We could finally see that everything was going in the right direction. Then I thought: “Okay, maybe I am doing something right after all.” On top of that, I understood how blind people respond to the world. How they see it without actually seeing it. I remember the conversation I had once with a blind girl. She gently touched my face so that she could visualize how I look. That’s how they do it. After a few seconds, she smiled and said: “Oh, such a handsome man!” That was an emotional moment for me.

You can read more IO articles about start-ups here.

Free ticker app OKO from AYES allows the blind and visually…
Acoustic virtual reality-based game helps blind people to…
waveOut makes navigation accessible for everyone
Data is the new gold, but only if you know where to look
Combating noise pollution with a beanie? Little Snooze is…
Share audio memes with Voicy: 'We're building a kind of…
Manage Cookie Consent
We use cookies to optimize our website and our service. Help us to make our site better by accepting all cookies.
Manage options Manage services Manage vendors Read more about these purposes
View preferences
{title} {title} {title}