With I-Med Techology’s lightweight main digital loupe, surgeons can call up 3D preoperative information, such as mri-scans or cutting strips, during an operation. This way, they do not have to interrupt the operation. The images from the loupe can be streamed so that colleagues can watch them in the OR or at a distance. The recorded 3D images can also be used in the training of doctors. Jaap Heukelom and Vincent Graham are developing the digital loupe in collaboration with doctors and other partners. Heukelom: “It’s great to hear from doctors how eager they are for these kinds of solutions.” 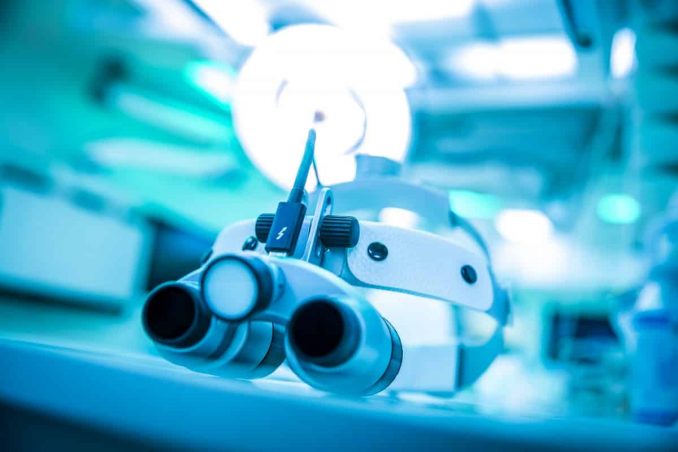 “Complex surgeries can often take up to 5 to 10 hours. Now a doctor often has to interrupt the operation for a while to look at a screen. With our loupe, this is no longer necessary. At the push of a button, he can see all the information he needs. This allows surgeons to work more accurately and efficiently. We make sure that they can do their job better and that ultimately leads to better health care.”

Have you ever thought about quitting?

“It started out as a 3D dental loupe, this was still a pretty big and bulky thing. The technique was also rather premature. Through a collaboration with surgeons who had endless hassle with glasses and loupes, we set to work to solve that problem for them. A year ago we only had a demonstrator, we had to pay for it ourselves. It was an unstable time with difficult moments as to whether it would be possible to establish the business.”

What makes you most proud?

“That we have always believed in technology and our solution. We did not give up and we continued to share our story with our network. It was a great moment when we finally signed an agreement between us, the Brightlands Health Campus and an investor. Now we can go all the way. Through European projects we are already working on new things. In March 2018, images – made with our demonstrator loupe – were used at a large congress by vascular surgeon Professor Michael Jacobs. More than 1200 surgeons and surgeons in training took part in an aorta reconstruction. The fact that doctors tell us how much they will benefit from our product also makes me proud.”

What can we expect in the coming year?

“The 3D images made by the loupe are also really good for training purposes, you see exactly the same thing as the doctor. We’re testing that now, and the initial reactions have been very positive. We want to deliver the first ten pieces at the end of this year and then scale up production. For this purpose, we will be testing a series of prototypes in the coming period. At the same time, we are also developing specific questions from doctors. We are working on a loupe that makes it possible to distinguish lymphs and nerves with added image information from special cameras. That still goes wrong at times, which has its consequences.”

What is your ultimate goal?

“We want to continue to innovate our basic product and extend it to various innovations. No one comes close to the image quality that we currently deliver. The added value lies especially in the fact that we can help doctors with specific questions, as we are currently doing with the development of a loupe that can distinguish between nerves and lymphs. Or a positioning system for the placement of prostheses. There are many other possibilities that we would like to develop. In five to seven years’ time, we want to have taken so many steps that large companies will no longer be able to avoid us. Maybe we are already working on an exit strategy: an international party that applies our technology to other products and applications.”

Founders: Jaap Heukelom (business developer and finances) Vincent Graham (CEO and development)
Year of foundation: 2018
Sales: The first products are expected to be sold early 2020
Grant: 800,000 EU total project value
Employees: two, but working on a project basis with a large team of specialists
Ultimate goal: Relieve doctors of their troubles (‘make cool technology so that they can do their work better’)

With this digital magnifier, surgeons and dentists can do…
More accurate surgery with the Anatomy Projector
This is how innovation works: 'It's a matter of combining…
The Digital Shiftings in Sino-Dutch Business Communication
TrueSim launches realistic simulation training with virtual…
VR viewers see more than stadium-goers through Tiledmedia