“That won’t work! It’s like a Harry Potter spell!” – These are the kinds of words he heard when he first applied to one of the accelerator programs. It’s true, their idea does sound a bit like a magic trick, as DAC wants to revolutionize cooling technologies and cool air with air. Yet behind this idea are not Hogwarts’ wizards, but a team of Ukrainian engineers and scientists instead. Each of whom has numerous scientific publications to their names along with several patents. The originator and leader of the project is Oleksandr Razumtsev, holder of 6 patents and author of 25 scientific papers. Pavel Panasjuk (from the Czech Republic) is responsible for business development. And they registered the company in Poland, because ultimately there was a venture capitalist there who believed in the scientists’ idea. 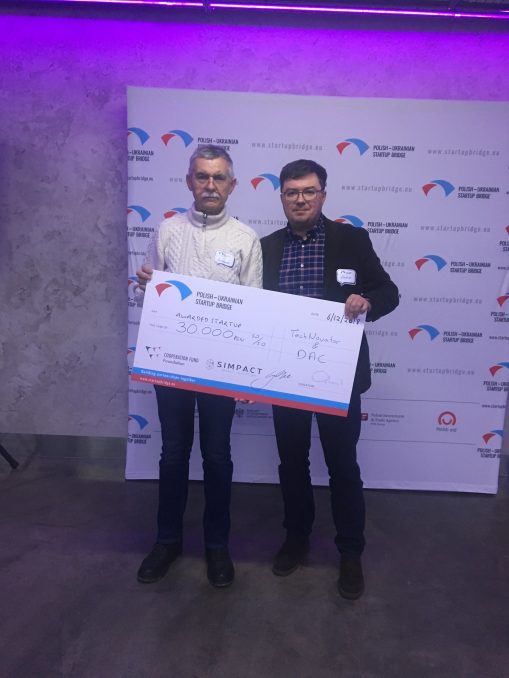 What is the Dynamic Air Cooling system that you have invented?

Pavel Panasjuk, COO: It’s a cooling technology that doesn’t use any chemicals or water. It is about converting energy that is in the air into kinetic energy. So, warm air flows under low pressure through our equipment. Some of the thermal energy is taken away during this process and the air then becomes colder. In a nutshell, we cool the air with air. It sounds kind of like a perpetuum mobile. But it works. In May this year we built a prototype just to prove that it is feasible. At present we are able to cool the air by 60°C. For instance, we can cool 3 sq. meters of 30° C air down to -30°C and we need only 60 seconds to do that.

What’s the reason behind this technology? Is there a problem with the cooling equipment that is currently on the market?

The technologies currently in use are harmful because they use chemicals for cooling which are 4000 times more dangerous for the environment than CO2. Just 250 grams of chemicals used in refrigeration systems have the same climate effect as 1 tonne of CO2 emissions. There are already technologies out there that use water for cooling. But in countries where there are extremely high temperatures, there is always a problem with access to water. Except it’s not the case that we’re solving one problem by worsening another problem. Some countries, as with the European Union and the G7, have understood this problem and have since ratified the Kigali amendment to the Montreal Protocol, which obligates them to limit the use of chemical substances in cooling processes. Therefore, we must come up with a completely new technology that is environmentally safe and doesn’t use chemicals or water.

What obstacles are you facing?

First and foremost, funding. So far, we have covered about 90% of the costs for the research and production of the prototype with our own money. We received 10% from investors and an investment fund. But now we need further funding in order to be able to progress. We estimate that we need about €700,000 to get the product to the stage where we can offer it on the market. The second issue is people. Our team is prepared for the technical process. But adapting our device to the various markets and industries is very challenging. Therefore, we now have to expand our team with people who understand marketing, patent protection, product design and communication with investors.

What was the worst time for the company?

When we switched on the prototype for the very first time. We almost burned everything down. We built the device from parts available on the market and bought an electric turbocharger. Unfortunately, the turbocharger was designed for cars and not for cooling equipment. When we connected the prototype to the power supply, it was a fiasco. Oil fired out of the turbocharger. It was even on the ceiling. After consulting with the manufacturer, we modified it. That was one of the best times for the company.

Oleksandr called me and told me that everything worked. After 4 years of research and preparation, what our assumptions about our theories turned out to be accurate.

What are your plans for the coming year?

In the first place, securing a patent and preparing a complete patent strategy and expanding our team. We already have Ukrainian and Czech patents, now we want to extend our patent protection. The second thing is the producing a prototype for one of our clients. At the moment our equipment is at TLR4.

We have signed an agreement for the construction of cooling equipment for a commercial space which the client will test out.

Where do you want to be in 5 years?

According to our plan, in 2 ½ years we will have a finished product which we shall enter the market with. And in 5 years’ time, we want our technology to be recognized by other manufacturers and be used in their equipment. Because we don’t want to just sell our equipment. We want to sell technology that will make this world at least a little bit better.

Are you interested in start-ups? Read more articles on this theme here.

Give table & bed linen a 2nd life with a shirt from RESHIRT
waveOut makes navigation accessible for everyone
A better, sounder sleep thanks to AirTulip's headboard
A smart tank as a cool way to store heat
Share audio memes with Voicy: 'We're building a kind of…
A well-organized medical platform for patients and medical…
Manage Cookie Consent
We use cookies to optimize our website and our service. Help us to make our site better by accepting all cookies.
Manage options Manage services Manage vendors Read more about these purposes
View preferences
{title} {title} {title}