This is a guest contribution by Jan van der Meer, alderman for sustainability in Eindhoven.

The last few weeks have seen a heated debate on the draft climate agreement in the Netherlands. As a result, climate change is once again being questioned by many. The discussions often reveal a lack of basic knowledge about CO2 and it would, therefore, be good if more attention were paid to this in blogs and articles. I am going to make an attempt. Conservatives would do well to respect science and look for their own package of measures from there. Because you really don’t have to be a scientist to conclude that something is going wrong at the moment. The key lies in basic knowledge about the effects of CO2 that should be present in all of us. 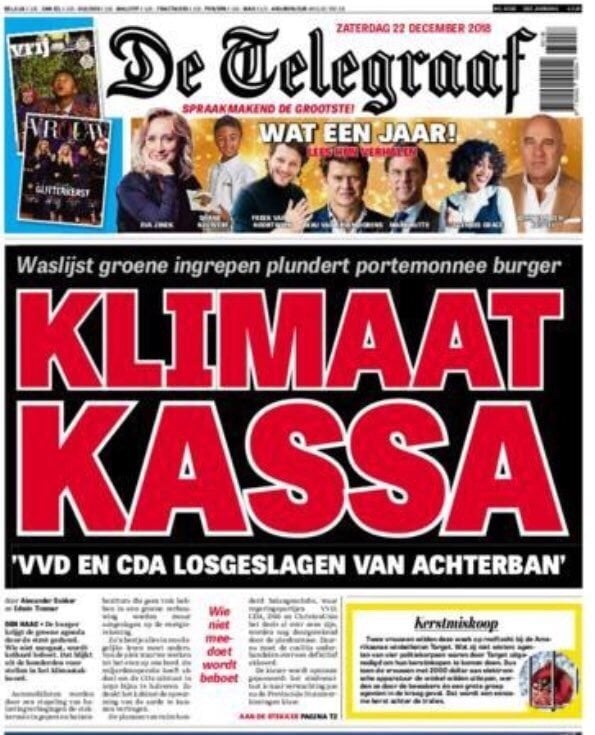 As if it had been agreed on, several conservative and populist opinion makers attacked the climate agreement just before Christmas. As always, De Telegraaf went the furthest in getting the Dutch people into a state of opposition and anger. And because the conservatives do not crumble the measures that are needed, they also immediately deny that the earth is warming up and/or that man has any influence on it.

On social media, both ‘climate alarmists’ and ‘climate sceptics’ try to convince each other with all kinds of graphs and articles. From the web, it is easy to pick an article from your liking, whether it is true or not. The fact that since 1988 we have had a panel of hundreds of scientists from all over the world (the Intergovernmental Panel on Climate Change; IPCC), who are constantly evaluating the risks of climate change on the basis of critically tested studies, is apparently not enough. But the IPCC has been proving for years: the earth is warming up and the warming is caused by an excess of CO2 in the atmosphere, ended up there by burning fossil fuels.

This consensus among scientists, however, is by no means convincing for the opponents of climate policy. The populists have now even come up with a new frame, namely that the scientists earn their living from climate science and that they are therefore not independent. This, for example, is how the friendly weatherman Gerrit Hiemstra suddenly becomes suspicious. De Telegraaf presented a manifesto of 24 ‘scientists’ with a counter-sound. Mind you: not one climate scientist was among them and no one had a scientific article about the climate reviewed by other colleagues to his name. For de Telegraaf, it is apparently no problem to pretend that opinions within science are divided about climate change. Everything for the purpose of getting that disgusting climate agreement off the table. This way, noise is created in society about (the causes of) climate change.

The most striking thing about the discussions on twitter is that many people lack basic knowledge about the functioning of the atmosphere and the role of CO2 in it. Once you know broadly how things work, it’s easier to understand what it’s all about. Simply put, it comes down to the following. When the world came into being about 4.5 billion years ago, there was no oxygen in the atmosphere and there were no animals to absorb that oxygen. Slowly plants have converted carbon dioxide (CO2) into oxygen through photosynthesis and animals (including humans) could be formed. This balance in the thin layer of atmosphere around the earth – on which we depend as humans – has been disturbed since the industrial era. The CO2 absorbed by the plants ended up in the soil through decay of extinct plants and eventually after millions of years turned into coal, oil and natural gas. Mankind has discovered these fossil fuels and since then has been burning them at an increasingly rapid rate, releasing the stored CO2 within a few decades and seriously upsetting the balance. By the actions of man. 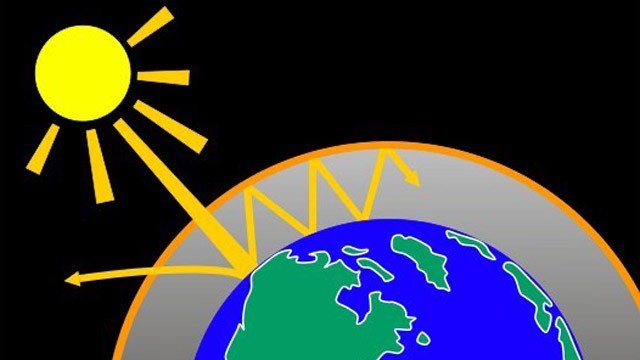 Carbon dioxide is a gas that causes sunrays in the atmosphere to reach the earth, but they are difficult to remove. This is therefore also called the greenhouse effect. Too much CO2 in the atmosphere, therefore, leads to global warming. This basic knowledge should be told a bit more in all blogs and articles so that all kinds of scientific research no longer has to be waved on to show that climate change is going on, what the causes are and what can be done about it. Nowadays, you really don’t have to be a scientist to conclude that something is going on. Heat records are being broken at an ever-increasing rate. For example, the Netherlands still has to recover from two heat waves and a long period of drought in 2018. The ten warmest years ever measured are almost all years after 2000. In short, leave science in its value and use your own common sense.

As I said in the introduction, many conservatives do not endorse the measures contained in the draft climate agreement. But instead of devising measures themselves, science is being called into question. Purely to do nothing. In that sense, these people are true conservatives. The war over science simply cannot be won, not only because the evidence of anthropogenic warming is overwhelming, but also because the warming can simply be experienced outside in reality. It is getting dryer, hotter and wetter and everyone is experiencing this now; all over the world. The solution to prevent worse is really the reduction of CO2. So to the climate sceptics, I say: leave science to what it is and come up with your own measures. That may well be nuclear energy and thorium, but do something and engage in a constructive debate on the package of measures. 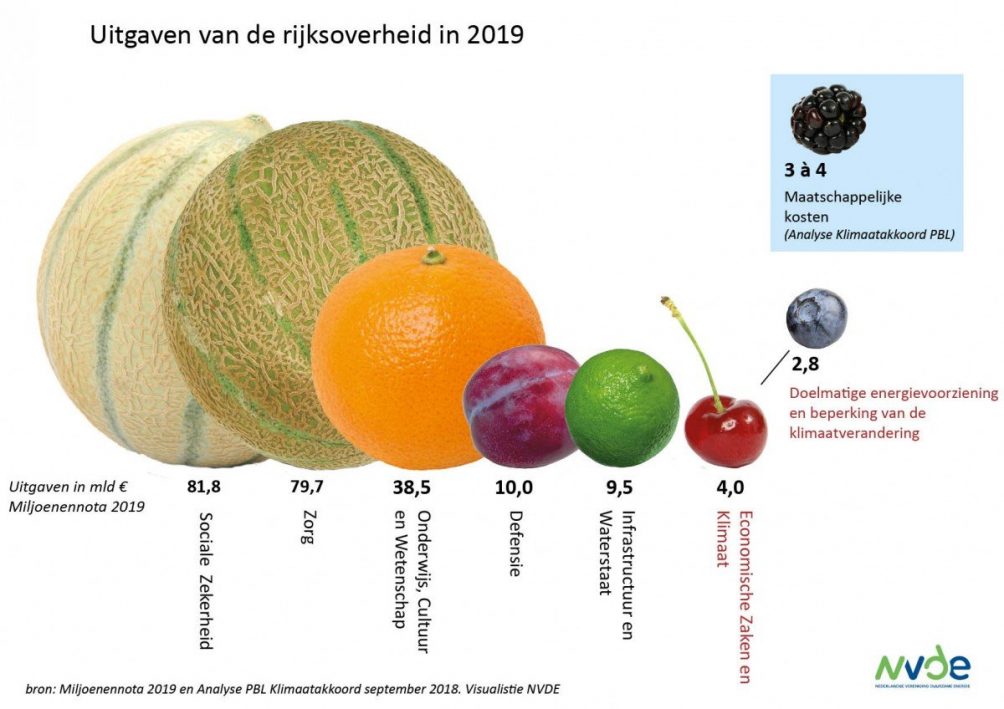 As far as I am concerned, the discussion is also about the distribution of costs. And this is really not about 1,000 billion euros in the Netherlands, as Thierry Baudet would have us believe. According to the Netherlands Environmental Assessment Agency, the social costs are about three to four billion per year, much less than we spend on defence each year (ten billion). However, the burden will have to be shared more fairly than is currently being proposed. The business community, for example, could pay a tax per tonne of CO2 emitted. That is not in the agreement at the moment.

The last resort of the conservatives in the debate is the position that the contribution of the Netherlands to the whole is minimal. After all, we make up only 0.3% of the world’s population. But on the other hand, we are the 18th economy in the world (1% of the total) and emit much more than the average per inhabitant. But more importantly, as Dutch people we live in a delta, so we run a high risk of flooding due to rising sea levels. If there is one group of people in Europe that should be very concerned about climate change, it is the Dutch. Reducing CO2 emissions is, therefore, essential for the survival of our country and so we must ensure that we move from the rearguard to the vanguard and finally set a good example. Because with the current 7% renewable energy, we are not exactly at the forefront of Europe. Finally, if you do not do it because of the climate, do it because of our economy. Because anyway, the future is green and it’s better to earn from that.

Electric Auke: 'Are we finally done with the armageddon…
Electric Auke: 'Don't try to turn improbable scenarios into…
Assessing carbon capture's impact
Corona or climate: when tackling big problems, look at how…
Personalized thermal air conditioning has the potential to…