Dutch Technology Week 2018 is fast approaching, and as ever, this year’s program will feature the biggest pub quiz in the Netherlands – Quiz Night XL. Now in its seventh iteration, this year’s quiz promises to be the largest yet, with close to 1,400 people expected to fill out the Klokgebouw, nearly 200 more players than took part last year.

The hugely popular event is once again being organised by the Eindhoven-based creative events team ‘Number 42‘. For Edwin Verbruggen and Julinka van Keulen, both owners as well as event organisers at Number 42, putting together the monster quiz is serious business.

“Everyone involved in this quiz is working on it the full year”, explains Edwin. “Making notes on their phone of everything they see or hear. Constantly asking ‘why are things like they are?’ Everyone has a huge list of subjects that we happen to bump into”.

“We’re constantly taking notes”, says Julinka, regular host of Quiz Night XL itself. “Whenever I see something in the news. I’m just taking notes throughout the year. Like you’re having a nice glass of champagne and you think, ‘why are those bubbles there?’ Things like that”.

“We even have a group of volunteers who test the questions for us in advance. Naturally they can’t join the quiz, but it’s great that we get to try it all out on them first. You want to make sure people have enough time to answer questions. You wanna know if it’s feasible, and you want to avoid torturing people with impossible questions!” 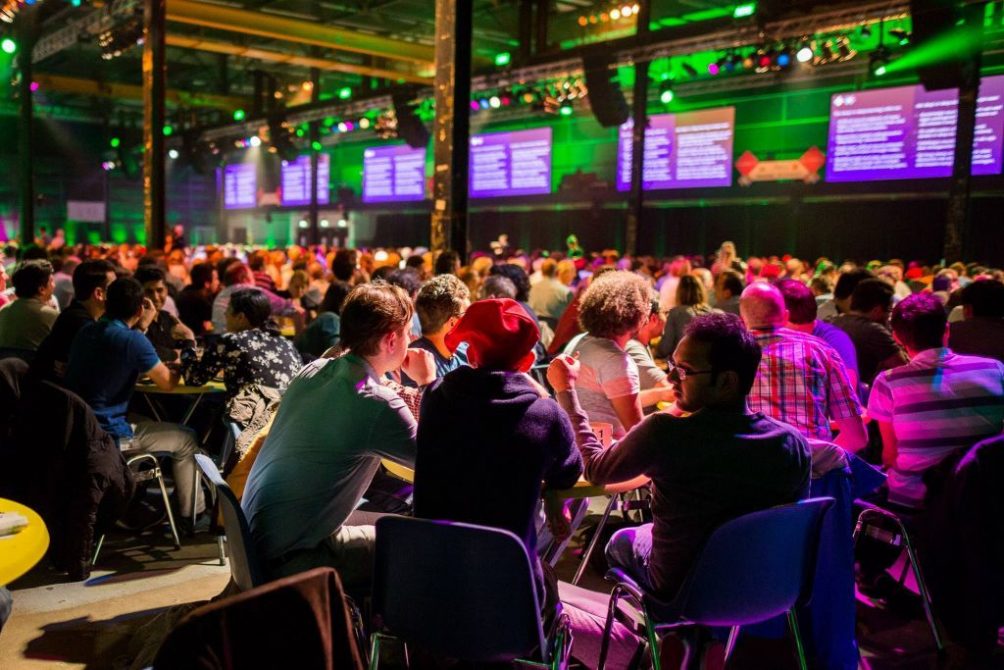 “There’s a little bit of everything”, adds Julinka, when asked what newcomers can expect. “Science and technology… you can expect questions on animal species… the periodic table. Very much back to school stuff. But also if Elon Musk has just sent a Tesla up into space, of course we’re going to mention that. We try to be on top of the latest in science and tech as well”.

“Last year first prize was a hot air balloon ride for the whole winning team, courtesy of the Ministry of Defence. We have tonnes of prizes. Last year we had the whole top 42 teams take home a prize. We have really great sponsors, so we have tickets for the Parktheater, the Muziekgebouw, various museums, movies, restaurants, festivals, even Philips products and escape rooms. We try and get a really good spread of interesting stuff from Eindhoven represented in the prizes”.

Speaking about the importance of the event, Mark Hoevenaars of Sioux Group said: “Quiz Night XL is the one and only event for Eindhoven’s technology professionals. Because QNXL is such a major event for the region, we want to make sure it continues to be a success – that’s why we’ve teamed up with the other partners in our network to spread our passion for high tech”.

The latest version of Sioux’s company film “We Bring High Tech to Life” – which won a major award at the The New York Festival of World’s Best TV & Films just last month – will also be unveiled at this year’s quiz.

Regular quiz players will be pleased to hear that returning once again for his sixth year is Quiz Night XL’s very own resident professor Maarten Steinbuch.

“We’re really happy to have him again”, says Julinka. “He’s quite the celebrity in Eindhoven. Maarten will present a problem to the people and they have to answer, and he reveals the answer with a little demonstration. even science experiments. Last year we had him explaining a maths problem with water and wine pouring. He’s arrived before by driving an electric car into the Klokgebouw, and flown drones across the room. He crashed the drone, that was kinda funny… We try to avoid big chemical experiments where he could lose his eyebrows”.

“Every year something goes wrong with Maarten’s experiments”, adds Edwin with a laugh. “But that’s part of the show!”

Quiz Night XL 2018 will take place on Thursday 7th June, and public sale tickets will soon be available via quiznightxl.nl

Eindhoven, what are we?
Researchers identify the most effective ways to reduce car…
Manage Cookie Consent
We use cookies to optimize our website and our service. Help us to make our site better by accepting all cookies.
Manage options Manage services Manage vendors Read more about these purposes
View preferences
{title} {title} {title}