A significant reduction in greenhouse gases is achievable. This is the conclusion drawn by researchers at the University of Hohenheim in Stuttgart, Germany. It comes down to combining the production of bioethanol from renewable raw materials with technologies for carbon capture and storage. Depending on the computational method used, a reduction of more than 100 percent compared to the EU benchmark for fossil fuels is probable – and consequently even a negative CO2 balance. The elephant grass Miscanthus is used for this purpose, and within the framework of the European EU cooperation project GRACE, it has successfully proven its usefulness for this form of biofuel production, the University of Hohenheim stated in a press release.

According to the researchers’ calculations, the production of bioethanol from miscanthus combined with carbon storage can make a significant contribution to reducing greenhouse gas emissions in the European transport sector. “Depending on the accountancy approach to biological carbon storage, a potential reduction of more than 100 percent compared to the EU benchmark for fossil fuels is plausible,” Dr. Lask sums up the results.

How this already well-established technology can be optimized further is currently being explored using a novel approach by researchers in the joint project ‘Growing Advanced industrial Crops on Marginal Lands for Biorefineries‘ (GRACE).

“The combination of bioethanol production with carbon capture and storage technologies could help remove carbon dioxide (CO2) from the atmosphere,” is the conviction of project coordinator Dr. Andreas Kiesel of the Department of Renewable Resources in Bioeconomics at the University of Hohenheim. 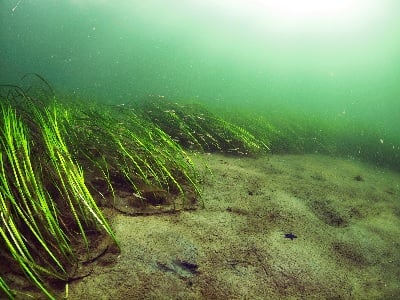 Higher carbon and nitrogen emissions due to vanishing seagrass beds – Innovation Origins
The disappearance of seagrass is a contributing factor to climate change and the unwanted growth of algae in the sea.

Together with Croatian researchers, a new type of biorefinery project is currently under development in Croatia. A bioethanol plant will be integrated into an existing oil refinery operated by the oil and gas company INA in Sisak. The aim is to compress the CO2 produced in the production of bioethanol, inject it into the existing cavities of the exploited oil deposits and store it there for hundreds of years.

According to Dr. Jan Lask, who is in charge of this sub-project at the University of Hohenheim, the location offers two major advantages: “On the one hand, the refinery is in close proximity to exploited oil deposits that can be used for CO2 storage and, according to experts, are stable over the long term for the next 1,000 years and beyond.”

Secondly, it is estimated that there are about 60,000 hectares of unused agricultural land in the Sisak-Moslavina district, some of which could be used to produce the biomass needed for bioethanol production. Large tracts of this land were used for agriculture in the past, but were abandoned during the Yugoslav war in the 1990s.

The researchers are paying particular attention to the Miscanthus x giganteus. This giant deciduous grass, native to Southeast Asia, grows up to three meters in height. “Miscanthus can be grown on so-called marginal soils that are not suitable for the profitable cultivation of other crops. This means that unused land can be cultivated again without competing with food and feed crops or other products,” Dr. Lask explains.

Once planted, Miscanthus as a permanent crop not only reduces the risk of erosion and stabilizes the soil, but also effectively suppresses the growth of weeds. This is because bastard indigo (Amorpha fruticosa), an invasive plant native to North America, is currently proliferating rapidly in the area in question. “Large-scale cultivation of Miscanthus could be an option to stop the spread of this species,” Dr. Lask points out.

Despite all the enthusiasm for the potential of the bioeconomy, the partners are also studying whether there could be negative repercussions for people and the environment and at what level of intensity biomass cultivation is viable and is risk-free: For example, it would be detrimental if increased biomass production displaced other uses. In the best case scenario, however, it would create new jobs in the regions of Croatia that have been underpopulated since the war.

Croatia plans to store CO2 in depleted oil fields -smart, or…
CO2 from sea cuts down on greenhouse gas in air
Croatia puts its efforts into making buildings more…
Qaptis takes truck emissions and turns them into liquid gold
Halving emissions by 2030 can keep 1.5°C within reach
2050 Materials aims to reduce CO2 emissions from the…
Manage Cookie Consent
We use cookies to optimize our website and our service. Help us to make our site better by accepting all cookies.
Manage options Manage services Manage vendors Read more about these purposes
View preferences
{title} {title} {title}