For a self-driving car to operate safely, the on-board computer must process a large amount of data very quickly. This data transfer is done fastest using light. Researchers at Utrecht University in Holland and the EHT Zurich in Switzerland have developed a method that allows the light to be controlled with even greater precision. That means even faster data connections. Last week, the researchers published their findings in the journal Nature.

This new method can be applied across a wide range of applications. For example, it leads to more efficient glass fibers for data transfer, ultra-thin camera lenses, and compact holograms with sharper images. The researchers foresee a broad impact on optical technologies. For example, futuristic smartphone cameras, biosensors, or autonomous vision for robots and self-driving cars.

The Utrecht researcher Freddy Rabouw worked on the research team at ETH Zurich as an NWO Rubicon Fellow, while Sander Vonk did an internship there for his double master’s degree in Nanomaterials and Experimental Physics.

In the case of data transfer by means of light, the intention is that the information comes out exactly where it is needed. The more accurately the light can be controlled, the faster the data connection. So-called diffraction grids are used for this purpose. These nano-grids accurately reflect the different colors of light in certain directions.

The search for highly accurate diffraction grids has been going on for many years. In a world that craves robots and autonomous cars, the demand for extremely accurate data connections is huge. The scientists from Zurich and Utrecht, in collaboration with the Heidelberg Instruments Nano company, seem to have found the holy grail of optical connections with a completely new method for the production of more efficient and accurate diffraction grids.

“The grooves on a diffraction grid have a distance comparable to the wavelength of light, i.e. one hundred times narrower than a human hair. Currently, these grooves are etched using production techniques from the microelectronics industry,” said first author Nolan Lassaline.

“Because of this, the grooves of the lattice are rather angular in shape. However, physics teaches us that grooves with an undulating pattern, such as ripples on a lake, can direct light more efficiently.” 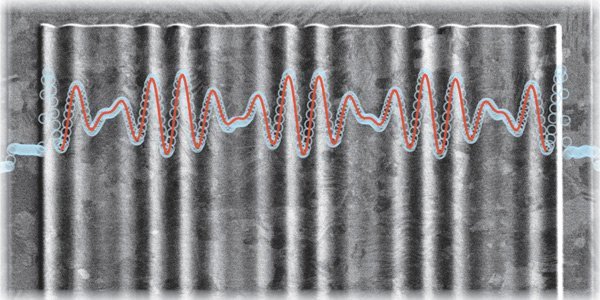 The researchers succeeded in creating these smooth wavy ‘nano-wrinkles’ with a technique based on the scanning tunneling microscope. This scans high-resolution material surfaces with a sharp needle. The researchers heat the tip of the needle to almost 1,000 degrees Celsius. They then press it into certain points on the surface of a polymer. As a result, the molecules of the polymer disintegrate and evaporate at those locations. In this way, the surface can be reworked very precisely.

The polymer then functions as a kind of mold for the optical material. The researchers create a reflective diffraction grid by applying silver to the polymer and loosening it again.

“This allows us to produce diffraction grids in all shapes and sizes with the atom spacing precision of just a few atoms,” says research leader Prof. David Norris. In contrast to traditional angular grooves, these grids are no longer approximations of an ideal surface area but are practically perfect. Such perfect grids create new possibilities to control light very precisely.”