Visitors of the Dutch Design Week can’t miss it: Roundabout Design. Daan Melis is the driving force behind this project, that focuses on making design and technology more visible in the city center. E52 asked him to write the story behind Roundabout.

To inspire visitors, Eindhoven will get a permanent design route in the city center. This “Roundabout Design” will eventually be a link between design-oriented institutions such as TAC, the Design Academy, the Philips Museum, the Kazerne, the
van Abbe museum, the DesignHuis, the Schellensfabriek, the NRE grounds and the VDMA. Eindhoven Brand Store near central station is acting as the start and finish spot. DDW 2016 acts as the kick-off of this process; a prelude to DDW 2017, as this Roundabout design route will be shown in full regalia at the national theme year “From Mondrian to Dutch Design”.

The Roundabout design route is a concept coined from the brand strategy and the new city vision of Eindhoven, city marketing organization Eindhoven247 and is co-financed by the city entrepreneurs. Soeps Creative Collective is the creative partner as well as the executor. The result should provide a clear pro le of the city because of which visitors come to Eindhoven to gain inspiration. 52 weeks a year. 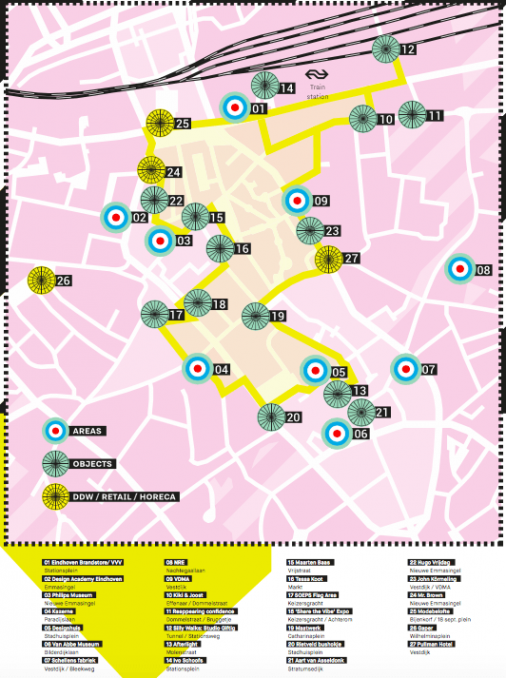 The ambition, position and future growth of Eindhoven as a city and heart of the Brainport region in terms of position and recognition is becoming stronger. Eindhoven is full of design and technology. We play at world level, but the funny thing is that this is not visible to the visitors of the city. It is hidden behind windows and walls. Inside a lot of hard work is going on, a collaboration to reach new big innovations. Eindhoven is a fascinating and unconventional city. Where the High Tech Campus, SectieC, Strijp-S and the TU/e are on track, you have to make a big effort to find the real heart of the city in the center. Culture, art and design are not visible in the streets, the post-war architecture wins no prizes, nor does it show who we really are as a city. Except for that one Dutch Design Week each year: then everything and everyone comes out in the open to show the true character of Eindhoven.

The brand of the city – symbolized by TDK, the three initials of Technology, Design and Knowledge – must therefore be visible and palpable throughout the whole year. That way it can act as a tool to entice tourists.

Retail and Hospitality
The themes of design and technology have been ‘branded’ in an Eindhoven way for years now, and it proved that this brand can convey a lot of power and can help to give a collective boost to the city. Our idea is to pro le TDK further, to strengthen it by showing both design and technology. On top of that, we are connecting to retailers, restaurants and cultural institutions. During the DDW three retail and hospitality companies will, jointly with Soeps and students of the Design Academy, perform a design experiment. In addition, technology has to be seen and felt whenever it’s relevant.

Metro System of storylines
Besides the Roundabout Design route, other city storylines will become visible. If you project the routes on a map of Eindhoven, the storylines create a subway map. That feeds the ambition, that’s what we like it to do. There is also a Roundabout Philips, a Roundabout DAF, a Roundabout fashion, or even a Roundabout Industrial Revolution. Physical interventions in the public space as icons of the past, present and future.

Bright Talents
As the first stage of the design route, the choice fell on the combination of existing and new design objects. The gems in the city are connected to the route, so we immediately have a valuable route. From this phase on, we will continue to build on top of that. International ‘Bright Talents’ will be invited to Eindhoven to start working and discussing with renowned designers, tech entrepreneurs and startups. This way new objects and experiments can emerge in the inner city. The whole project will be entirely in Eindhoven tradition, one of co-creation. Established designers together with all the international bright talents we so badly want to come to the city. Just imagine: Areas in the center such as VDMA or NRE as creative hotspots where a public presentation will be held once every week. People can watch, listen and be amazed, much like the Carnival Parade, or the Brabantse Dag. That’s the energy you want to have, the mentality we need. And mean- while you build up a strong network of new (Bright talent) ambassadors.

Finally, but not unimportant, Roundabout also contributes strongly to the implementation of the municipal policy on a more attractive downtown.