It is Friday evening, 6 o’clock, and all visitors are slowly leaving the Evoluon. Once again, we can look back on a great day. And then we realize: we are already halfway the event. We can only enjoy this spectacle for two more days.

The fact that we have already had three days of RoboCup also means that the competitions progress further and further. Of course, this leads to more and more thrilling matches. In the Standard Platform League, the group phase is completed as of today. This means that the matches for tomorrow are now known. The three best teams from the different groups, B-Human, Nao-Team HTWK and Berlin United, have directly qualified for the quarter final. The remaining teams will have to compete with each other for the remaining spots. One of these remaining teams is the Dutch Nao Team, the only Dutch team in the SPL. Unfortunately, they have only lost by 2-0 and 7-0, so far. However, because they were in group 1, they have only played against very strong teams; they will now give everything they’ve got to ensure that they achieve their first victory, in the indermediate round against HULKs.

In the MSL, the group stage has ended as well. The group is now split into two different ones, where the teams in the first group have already ensured their spot in the semi-final. Tomorrow, the other three teams will battle for the fourth spot. So far, there are two teams that are by far the strongest, Tech United and CAMBADA. It looks like these will be the teams that will compete against eachother in the final. Today, there was already a match between the two teams, and it became a thrilling one. Tech United won narrowly, with 4-3. Tomorrow – Saturday April 2 – the same match is on the schedule again, at 3 o’clock in the afternoon to be exact. This promises to be an exciting match once again! We hope that the tent will be filled with visitors, so that both teams are be supported as much as possible. 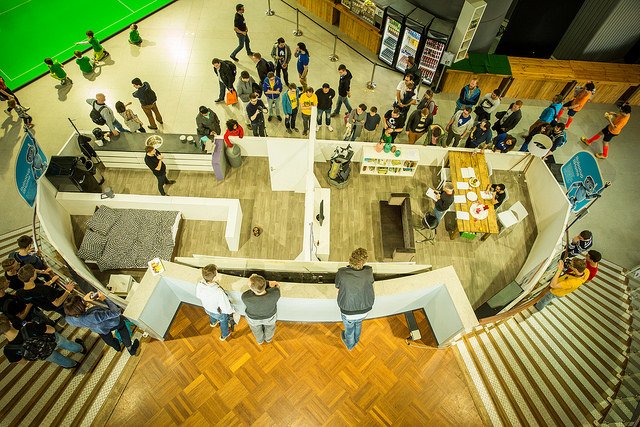 Of course, there were new challenges in the @Home League as well. Today, the robots are tested for voice recognition and navigation. In this league, three teams are very close to each other, considering the points they have earned so far. At the moment, the German team Homer @Uni-Koblenz is in first place, followed by Tech United and ToBI. Because the difference between the teams is so small, everything will be decided during the final days. The Slovenian teams that participate in this competition have not received any points, unfortunately, because they have not passed the robot inspection. We hope that this will change tomorrow. At the SSL, the fourth Senior league of the tournament, it is the changing of formations that impresses the visitors the most. Every game situation is assessed differently, and in every case the robots choose different positions on the field. Here, it is interesting to see the similarities with robot soccer and real soccer. Many different tactics are possible! 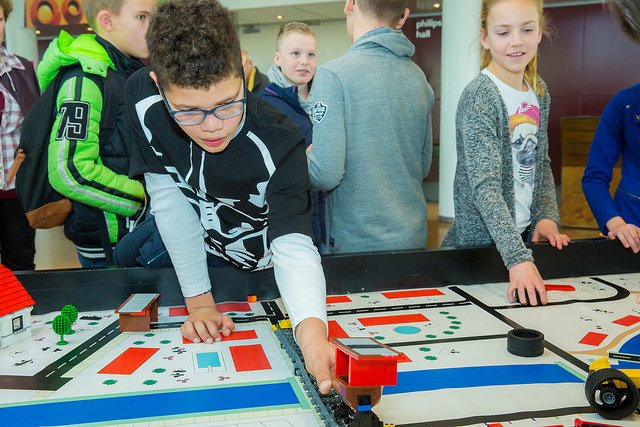 The workshops and demos that are located throughout the building, are still incredibly popular. They have even got some company today. The entry hall, in which Kolja Kugler’s music robots were already located, is now supplemented with even more music, made by the robot band of Team DARE. This band makes sure that the atmosphere in the Evoluon is good at all times, with their large repertoire, without any human interaction.

With much more great things to come, including the finals on Sunday, we would like to invite everyone to visit the Evoluon. And why wouldn’t you do it? It is free! Get in the RoboCup mood with this video, with footage of the first amazing days.