At the High Tech Campus, seven start-ups have been busy with the HighTechXL accelerator program for the last three months. They are on their way to the XL Day on 6 December, where they can win over future investors. E52 takes a glimpse into the crowd and works towards XL Day with portraits of the start-ups. Today the first one: TicTag.

TicTag is the only fully Dutch start-up in this edition of the HighTechXL program. Originally Arnhem-based, the company has been in existence for two years and has four employees, three of whom work full-time. CEO Pieter Heersink explains why they are participating in HighTechXL: “We are particularly involved to become better from a commercial point of view. The R&D is already going well with us. HighTechXL helps us to gain brand awareness and that is necessary to prove that our technology has added value.” 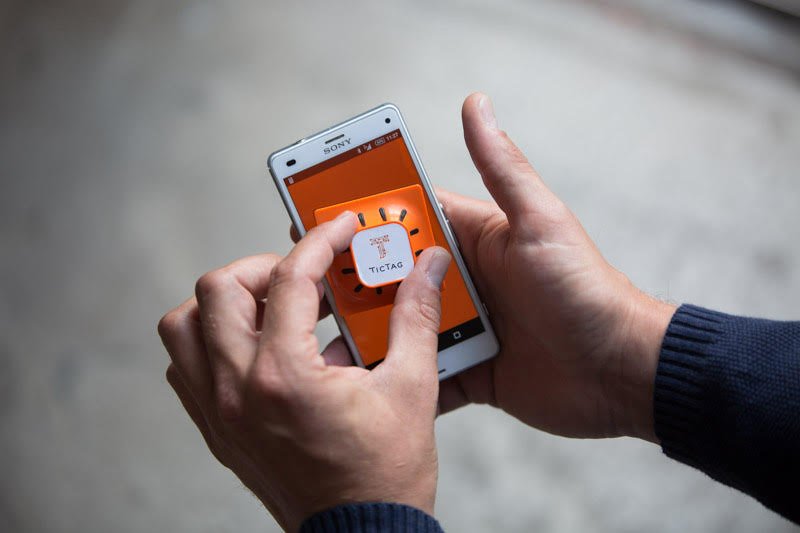 The stamp with a unique pattern

In 2014, Heersink started with the company Kudoos, from which TicTag originated. “With Kudoos, we had the idea of bringing all kinds of savings cards back to an app, because you never have those cards with you when you need them.” During the development of Kudoos, Heersink encountered a problem of identification in the store. QR codes were not handy and NFC did not work with iPhones.  “Then we came up with the idea of a multitouch identification method. Each smartphone can recognize at least five points. The pattern that we still have in a stamp can, therefore, prove that you are in a shop because only that shop has the stamp with that pattern.”

“Why should we still walk around with all kinds of cards and keys when we already have everything in our pocket?”Pieter Heersink, CEO TicTag

Instead of building on existing technologies, Heersink has continued to develop this idea and founded TicTag in 2015. “Soon we noticed that this product was suitable for more applications because it is a kind of digital fingerprint. For example, you could identify and unlock a door lock. Your phone becomes a new identifier or key with TicTag.”

According to Heersink, TicTag is more intuitive than NFC: “In bank cards nowadays NFC is also present, but I see a lot of older people queuing up at the cash register, who shield their bank card in order not to pay for the person in front of them by mistake. The user only understands the real touch, the contactlessness of NFC is not clear enough.  We think we are more intuitive and we can provide more security in combination with NFC because contact with our technology is really needed. This can therefore not just be read out by a criminal in the metro or bus.”

One of the motives of Heersink is to deal with privacy. “By using physical touch instead of a contactless connection, you make a conscious choice to share data. You are your phone and you have control over tapping something, for example, to make a payment. You are the owner of your data and you decide when you want to share something or not because you decide if contact takes place.”

TicTag’s final product is a smart tag printed on a thin foil. They do the printing in collaboration with the Karlsruhe Institute of Technology and the InnovationLab research institute in Heidelberg. The proof of product of TicTag’s second version is completed at the end of this year. The company will then set up its own production line to be able to produce large volumes from June 2018. The goal is to be able to print the smart tags with roll to roll technology and make about ten thousand per hour. The purpose of the start-up is to be able to make payments with this technology in the future. “But, of course, when we achieve this depends on the investments we get.”