While sea levels are slowly rising at present, the IPCC (Intergovernmental Panel on Climate Change) predicts that the tempo will accelerate from 2050 onwards and that this will have serious consequences.

The journal Nature Communications published a study that maps the damage to Europe that is caused by rising sea levels. It concluded that Europe needs to spend between €1.8 and €2.8 billion a year on reinforcing dikes in order to prevent hundreds of billions of euros a year in flood damage. The report commissioned by the European Commission is in no doubt: one-third of Europe’s coastline, from Norway to Greece, must be reinforced before 2100. This calls for a European Delta Plan.

Lowering the temperature is practically impossible

The temperature on earth has risen by 1.5 degrees compared to 1900 as a result of human activities. Never before has the average temperature risen so rapidly. Plus, with no change in policy, the increase will jump to between 4 and 5 degrees by 2100. It will take an enormous amount of effort to bring this to a halt.

It will require a substantial switch to a sustainable way of life for the world’s population to be able to play their part in the reduction of greenhouse gas emissions. On top of that, warmer water temperatures cause additional CO2 emissions to be released from the oceans. This effect has been explained in detail by scientists at Edinburgh University (Scotland). And it makes it all the more difficult to reverse the rise in global temperatures back down to a stable or even lower temperature. Human beings have only been warming the planet for two hundred years. Yet the way back to the previous temperature is likely to take many centuries, if possible at all.

If we look three centuries ahead, a time period when the temperature probably won’t fall, then we will have to deal with a 5 to maybe 8 meters rise in sea levels. Although Europe – with a climate accord and a Green Deal – and other countries including China are on the right track, it is too optimistic to assume that enough global follow-through will take place quickly enough. A sharp rise in sea levels is therefore inevitable. Forty percent of the world’s population lives or works less than 50 km from the coast. We have got to think about what this means.

At the beginning of 2020, Rutger Bregman let us get used to the idea in his pamphlet ‘Het water komt‘ (‘The water will come’) that we will have to abandon large parts of the Netherlands. At the same time, Sjoerd Groeskamp argued for enclosing the North Sea with a dam from Scotland to Norway and one from the south of England to Brittany. Roughly speaking, there are two escape routes: flee or stay. But is the choice really that arbitrary? 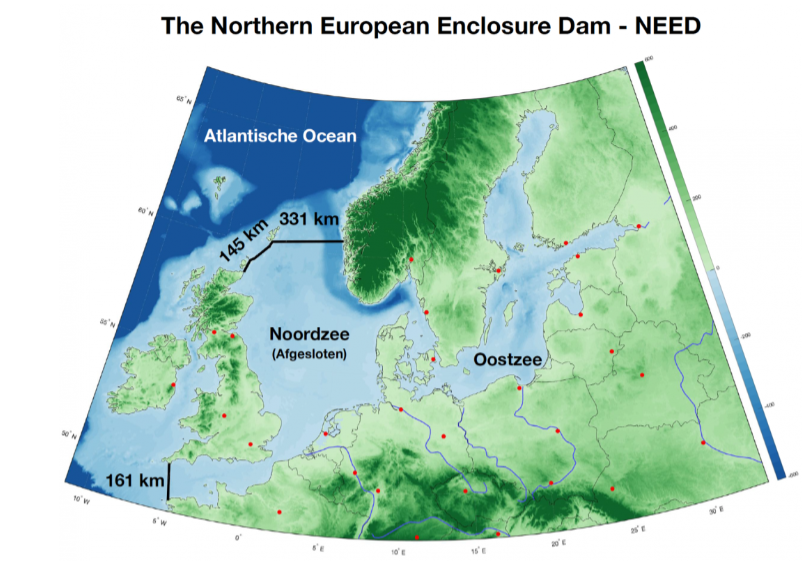 Many inhabitants of poor countries that are susceptible to rising sea levels, such as Mozambique or Bangladesh, actually have no choice. They are being driven away by the rising tides and are seeking salvation higher up. There is hardly any money available for any kind of worthwhile coastal defense.

Remarkably enough, inhabitants of rich countries do not have a choice either. Investments in buildings and infrastructure in the narrow, densely populated coastal zones are considerable. Their disinvestment in the event of mass relocation and the number of alternative investments further inland are many times more expensive than the strengthening of sea walls. This is a clear indication of the escape route for the wealthy world. In spite of Bregman’s pamphlet, it wouldn’t be wise for the inhabitants of rich countries to relocate. Instead, they should work on strengthening their coastal defense systems.

Groeskamp’s ambitious plan to block off the North Sea fits in well with this. Good, because it will protect all the countries of northern and northwestern Europe in one fell swoop. Although, with a construction period of 100 years, such a plan requires long-term and stable cooperation between all member countries. (That said, we do have an inkling of how the United Kingdom is faring in relation to the rest of Europe).

And the plan has got to be technically feasible. With a length of 635 km and a depth of 350 m along 100 km off the coast of Norway, that is very much in question. The North Sea would become freshwater. It’s a fact that relatively stagnant water poses major risks in terms of currents and ecology. In addition, planning is risky: When should you start? Are you too late then? Or much too early? Moreover, certain problems at some locations are already urgent. While at others, well, they are not even in the picture yet. The plan is all or nothing.

Fortunately, we do not need to choose between these two extremes. As we already have a much more realistic plan that we can realize step by step: The Haakse Zeedijk (the Haakse Sea Dike)named after the inventor, Rob van den Haak, who passed away last year. It is a wide dike made of sand, 25 km off the coastline, which can be constructed for each basin, the three Dutch basins from Walcheren to Den Helder. In the coastal basins, a water level of 0 NAP can be maintained and the sea dike itself can withstand a sharp rise in sea levels. The dike will prevent river dikes, pumping stations, and bridges from having to be constantly adapted to the rising sea levels, and will provide a sufficient supply of freshwater in dry periods and will counteract the salinization of agricultural land. 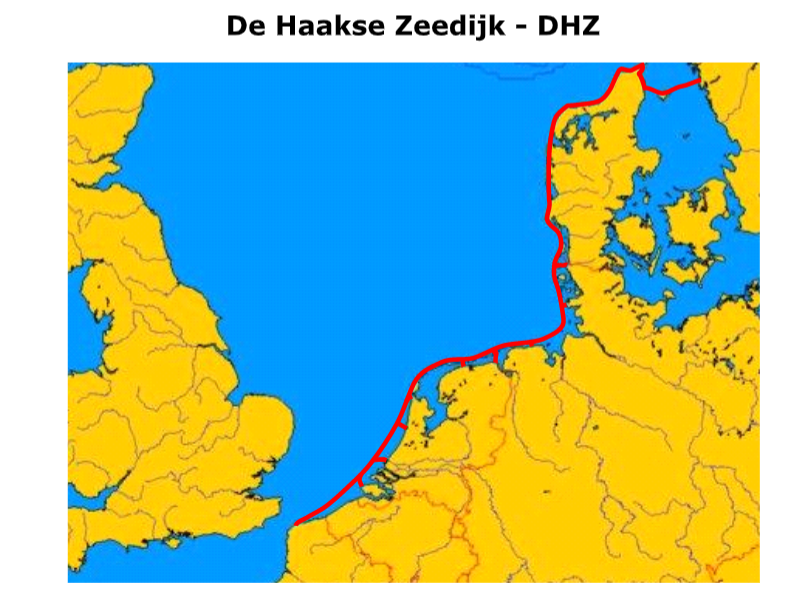 To the south, the dike can be extended with a Flemish basin and eventually reach Calais (France). While to the north, it can be extended to Gothenburg via Germany and Denmark. This will protect these same countries in the future, with the exception of the United Kingdom.

Construction spread over 75 to 100 years

Contrary to the plan to block off the entire North Sea, the Haakse Sea Dike would be constructed in phases. This is dependent on the needs at any given time as well. It can adapt gradually and flexibly to the tempo of rising sea levels, changing insights, scientific and technical progress. As well as to the development of a circular economy. This approach is also cheaper because the depth is less than 20m almost everywhere. Plus, sand can be extracted more cheaply. The cost of a dike from France to Sweden amounts to €300 to 500 billion. Spread over 75 to 100 years, this could easily be met by the participating member countries.

The major advantage of this plan is that the buffer lakes and the Baltic Sea will maintain a water level similar to the current sea levels between the existing and the new coastline. This will not only preserve the existing infrastructure of the entire Western European coastal regions but will also allow these buffers to temporarily accommodate excess river water at high run-off rates, thereby reducing dependency on large pumps.

The report commissioned by the European Commission also highlights the vulnerability of a large part of southern Europe’s coastlines. An effective solution could be to close off the Strait of Gibraltar. This would also protect North Africa from rising sea levels.

We only have about 30 years before the sea starts to rise more rapidly. That’s cutting it close when it comes to being ready on time to prevent flooding in Europe. We urgently need to give this serious thought in order to quickly draw up a viable European Delta Plan. Starting with the Netherlands, followed by plans for North-Western Europe and for Southern Europe with North Africa.

Engineer Dick Butijn is one of the initiators of De Haakse Zeedijk and a participant in the Sea Level Rise Knowledge Programme set up by the Dutch Minister of Infrastructure and the Environment and the Delta Commissioner.

Halving emissions by 2030 can keep 1.5°C within reach
Electric Auke: 'Are we finally done with the armageddon…
Electric Auke: 'Don't try to turn improbable scenarios into…
Switzerland in 2090: oranges instead of hydropower
Nature itself can mitigate the impact of extreme weather…
Fabric shade screen in outer space against global warming