Higher road safety, better traffic flow, and a greener environment: this is what users and local residents of the Ring road around Eindhoven would like to see arranged with the help of smart solutions.

As part of the step-by-step plan to provide the city with Smart Light (not only better lighting, but at the same time additional digital functionalities around mobility and liveability), the initiators of Jouw Licht Op 040 have arrived at the Ring. Stijn Verkuilen, Rianne Valkenburg, and Elke den Ouden presented the state of affairs in the office of co-organiser Heijmans on Thursday. 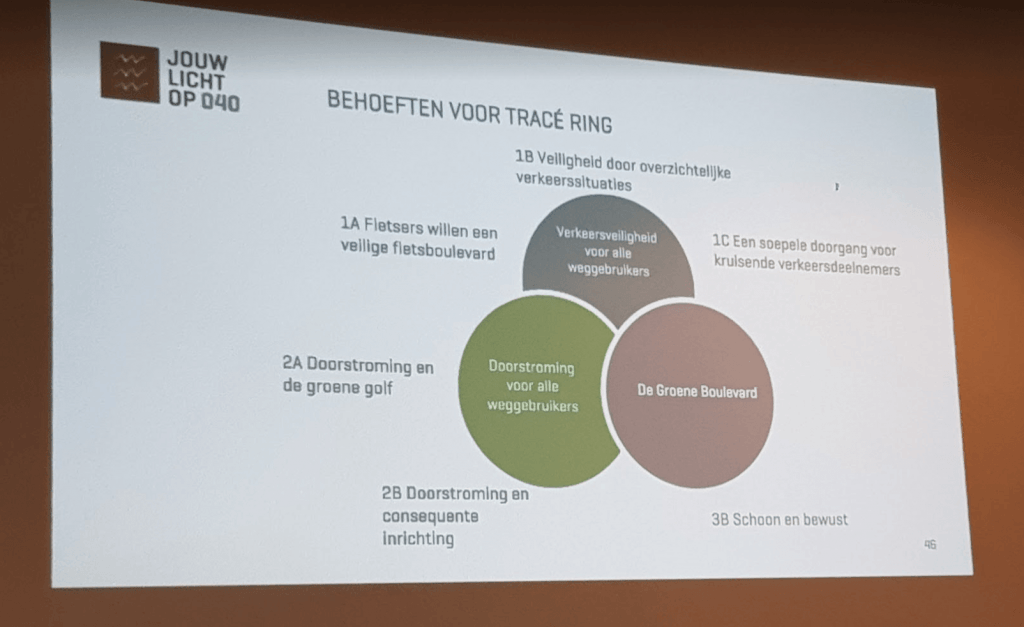 The process for the Ring road has four phases, says Valkenburg. Phase 1, replacement of the lamps and installation of a new light grid, is already in full swing. Phase 2, with an emphasis on identifying the wishes and needs of residents and other users, has just been completed. Soon it is time to give Phase 3, devising concrete solutions, a push to finally, in phase 4, get to the realization of the most desirable (and feasible) solutions.

Valkenburg emphasizes the role of users throughout the process. During the survey, 143 needs and 79 opportunities could be identified from that angle. These were then used to produce clusters, which in turn could be submitted to a control group. “We have not seen the world’s most shocking ideas so far”, she says. But that can all still come in the future.

Valkenburg highlights a number of details from the results. “When it comes to road safety, the reactions of cyclists are especially striking. We were often told that it looks like the cyclists are completely forgotten on the Ring. They have to make use of the side roads, but there are always cars there as well. They literally don’t feel seen there and they hate all the exhaust gases. What they especially want is a safe bicycle boulevard. It should be a good way to go, but that is not how it is felt. That is why they are now much more inclined to ignore the Ring to get to their destination. The solutions that were put forward mainly relate to a better lining, more logical patterns on the road and a warning for drivers with, for example, light-emitting cat eyes at the danger points.”

The same could also help motorists on the many dangerous level crossings of the Ring. “What all road users demand is a smooth transition at the intersections. The Ring is sometimes literally an obstacle to cross over. We heard from people that they were reluctant to do their shopping ‘on the other side of the Ring’. The Ring is, therefore, a barrier for them. Others think it ‘nice and lively’.” In all cases, smarter traffic lights are seen as a solution. Valkenburg: “Think of traffic lights that give priority to a large group of cyclists. Or where you are advised to ride a bit slower or faster to get the green light.”

What the interviewees say could also help for the flow is less difference in maximum speeds. “Now, at some part, 70 km/h is the maximum speed whereas it is 50 in other parts. This difference is considered clumsy. There were, by the way, also quite a lot of people who would find 30 km/h fast enough for the whole Ring.” 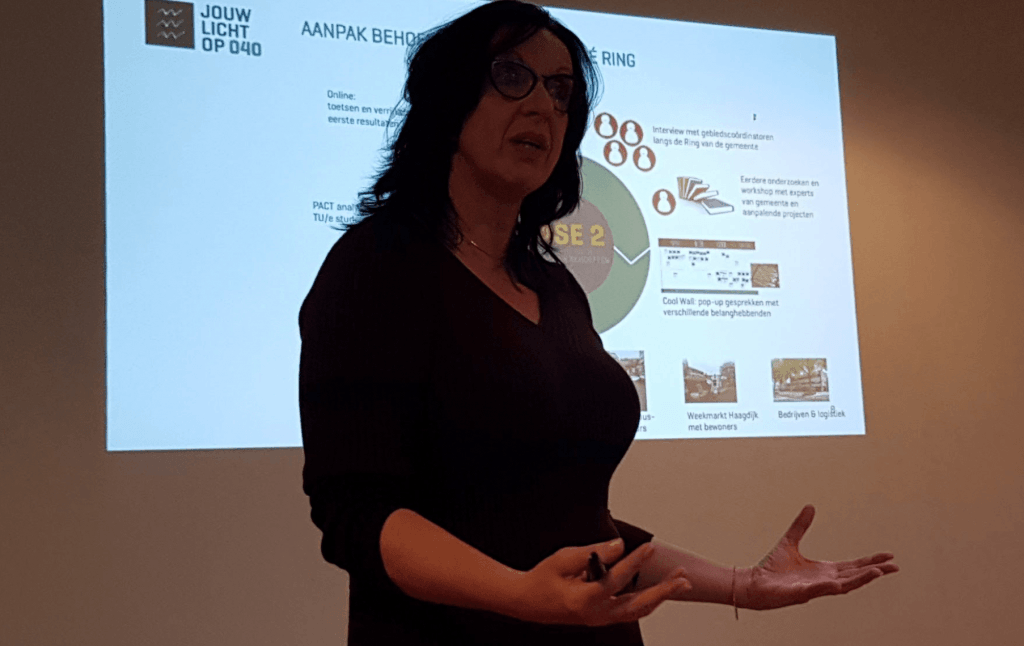 The latter would also fit in with the many wishes around a greener ring. Valkenburg: “Especially local residents tell us that all traffic on the ring road is dirty. The air is dirty, it is not good to live at such a road, they say. What these people notice is that there is a lot of attention for the Ring as a traffic artery but not as a residential area. The residents feel ignored in this respect and emphatically demand a greener whole. With trees and plants as well as projections or other ways to influence the appearance.”

Now that the ideas and needs of users are listed, it is time to make concrete plans. This will be done in the coming period in various sessions in consultation with companies, but also with students who are active in Innovation Space.