Yesterday, QuTech, a collaboration between TU Delft and TNO announced together with Intel in the science journal Nature a breakthrough in quantum computers. They did this concurrently with a team led by researchers from the University of New South Wales in Australia, also featured in Nature.

The majority of quantum computers being developed worldwide work with what are known as qubits. These only function at temperatures close to absolute zero (-273 C°). This calls for incredibly expensive cooling. But as soon as they are connected up to conventional electronic circuits, they overheat straightaway. The breakthrough from QuTech and the Australian team is that they have developed qubits made of silicon. These silicon qubits can operate at the slightly higher temperature of 1.1 Kelvin.

According to a TU Delft press release, this is a crucial leap towards a functional quantum computer. The higher temperature opens up the possibility of integrating qubits (the essential building blocks of a future quantum computer) and the electronics that operate them on one standard chip. “This is the first time we can present qubits that are “hot, dense and coherent,” says lead researcher Menno Veldhorst. “We are talking about qubits that are compact. And which function with a high level of quality at a relatively high temperature.”

A quantum computer is a new type of computer in which the processor utilizes the principles of quantum mechanics. Such a processor can perform the same calculations in one session (in parallel) for a vast amount of data. Consequently, it will be many times faster than a conventional computer, although it can only be used for very specific tasks.

Previously we made this explainer about the Quantum Computer:

This higher operating temperature is of particular importance. Quantum information stored in qubits soon becomes unusable. That’s unless the qubits are cooled down close to absolute zero (-273 degrees Celsius, or 0 Kelvin). For this reason, qubits normally function in dedicated cooling systems. Nevertheless, they are still driven by conventional electronics that invariably operate at room temperature. 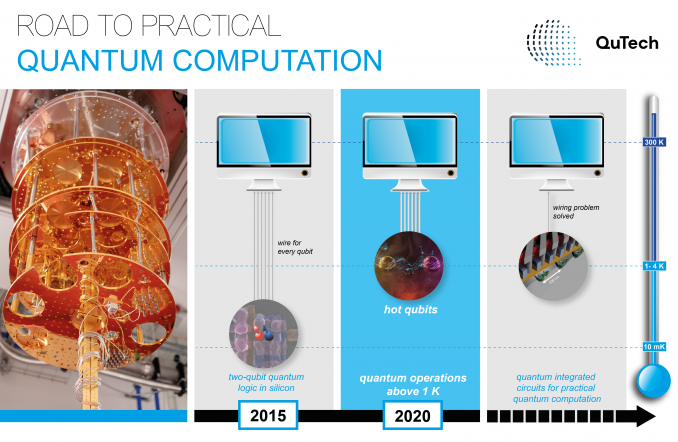 Separating qubits from electronics causes problems when scaling up the number of qubits. Currently a separate cable is needed for each qubit to the electronics that drive them. This is no longer viable considering the millions of qubits needed for a fully functioning quantum computer.

Veldhorst: ‘The status of quantum technology is comparable to that of the classical technology of the 1950s. At that time each component had to be soldered to each other separately. Which became impracticable considering the ever-increasing number of electrical circuits.”

The solution at the time was an integrated circuit, which made it possible to construct the components on a single chip. This technology has now cleared the way for billions of transistors to be placed on one chip. The challenge at present is to create a ” quantum integrated circuit.” Although the qubits and the electronics that drive them must be able to operate at the same temperature.

Therefore, the challenge is to find a temperature whereby both the qubits and the electronics are able to function properly. On the one hand, researchers are attempting to make the electronics function at a lower temperature. And with success. A very recent development, for example, comes from QuTech, which has produced a chip together with Intel that can be used to control qubits at low temperatures. “The other side of the story is to make qubits work at a slightly higher temperature,” says researcher Luca Petit of QuTech.  “That’s exactly what we have achieved at QuTech in collaboration with Intel.

This is the first time that we have been able to control qubits in silicon at a higher temperature. And above one Kelvin as well. The increase in temperature may seem like a small step, but it’s a huge leap when it comes to the available cooling capacity. Moreover, at these temperatures the qubits no longer have to work in a vacuum, but can be immersed in a liquid. This makes everything much more practical.”

“We used standard production technology and the same silicon as in conventional electronic equipment,”says Gertjan Eenink, co-author of the publication in Nature. “In order to work at a higher temperature, we had to make improvements during all stages of the experiment. We have created silicon qubits that can be isolated from undesirable interactions.”

“Performing quantum calculations at 1.1 Kelvin depended on us being able to reduce all potential sources of noise. As well as develop measurement procedures that are thermal-resistant. It was a wonderful moment when everything came together and we were able to perform quantum operations with two silicon qubits at this temperature for the first time ever.”