This year, GLOW is presenting 32 light artworks from the Netherlands and abroad. As always, great emphasis is placed on the innovative and experimental work of local makers. New in this year’s festival is the collaboration with Nanjing, sister city of Eindhoven, in which traditional Chinese light art comes together with new lighting techniques. GLOW’s programme is divided into four categories: Head Light, Artistic Light, New Light and Green Light. We talked with five makers from different categories.

WHO Jan Fabel
WORK Tower of light, video mapping on the Lichttoren

Together with Dirk van Poppel and Erwin Steijlen, Jan Fabel paid a beautiful tribute at the Blob last year to the light bulb, which is slowly disappearing from our lives. This year the trio plays with the story of one of the city’s most famous buildings, the Lichttoren. The place where the incandescent lamps used to be tested, which withstood the bombardments of World War II and later became the headquarters of the Philips Lighting Division. For Fabel, too, it is a beacon of his youth. ‘When I saw the orange light looming from the Lichttoren in the distance, I knew I was back home.’

Video technology is a huge theme in his work as an artist, teacher and owner of event and media companies. Fabel is specialized in video mapping, with which he can project 3D animations on buildings and large objects (an airplane for example) in a spectacular way. For Fabel, now a resident of Hilversum, it is the ultimate way of telling stories. During GLOW, Fabel and his team will recollect old glory and reveal visions for the future. What happened in the Light Tower over the years? And what could the future bring? Music and six enormous light projectors across the street make this monument come to life. ‘A fascinating ode to what shadow and light can create.’

WHO Philip Ross
WORK Gibson, next to Stadhuisplein

The fact that light arouses emotions, and in this case even leads to interaction, is what fascinates Philip Ross. Light does something with people, but Gibson also makes people do something with light. This light artwork is inspired by the work of J.J. Gibson, a psychologist who stated that the perception of man is more than just a registration of things that exist. Where brains were often compared to a computer, Gibson considered perception to be an active action. Something you do with all your senses and your whole body. ‘And that evokes different emotions per person’, Ross adds.

You may know Philip Ross from his Fonckel, the LED luminaire you can control by touching it. He studied industrial design at Delft University of Technology and later obtained his PhD in Eindhoven. From his studio at TAC he works as a light artist and designer. This year he was approached by GLOW to create a project. Besides international artists, the organization wants to show the ‘Eindhoven signature’: projects in which creativity and technology come together in an exciting way.

Gibson is a work of light art in the first place, an installation of seven by seventy metres and twenty moving heads that react to passers-by by using algorithms. The interactions are amplified by the sound of sound designer Joep le Blanc. But as with much of Ross’ work, there is also a research side to it. Together with the Intelligent Lighting Institute, he will explore the subject of light and interaction. What happens if you give light beams a sense of touch and they can feel the surfaces they light up? By moving, the light beams scan their surroundings and react to what they encounter. What does that do to the audience? 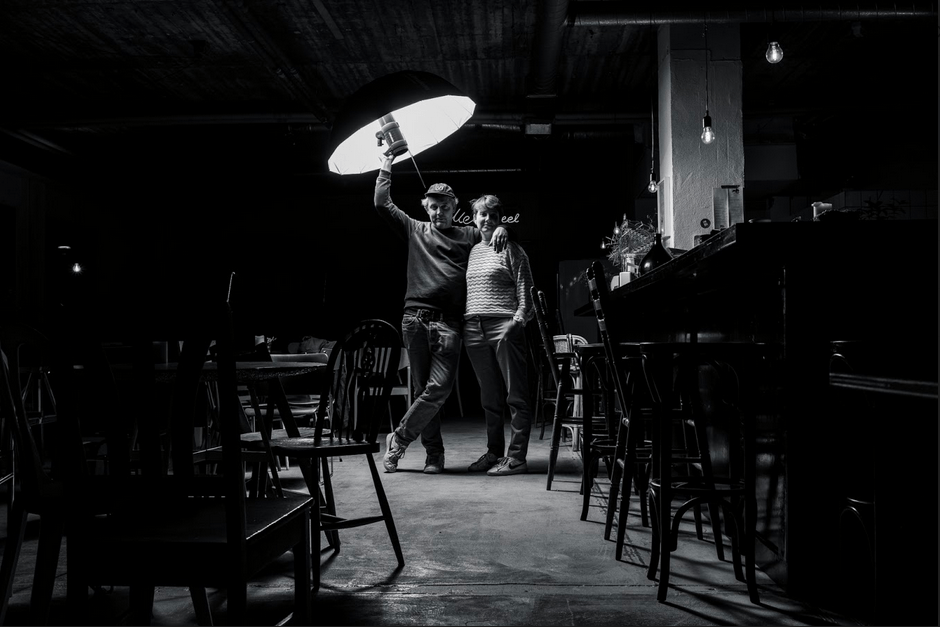 Standard lamps, pendant lamps, reading lamps and desk lamps: 400 lamps are shining at the Light Market during GLOW. All second hands items, looking for a new owner. It raises the question: is a market possibly art too? And can art have the shape of a functional market?

Margriet Craens and Lucas Maassen are designers and co-initiators of the pop-up restaurant Wall Street. Next to being a bar and eatery, this happens to be a place for experiments with the meaning of value too. Value is not all about money, they both say, though they choose not to withdraw themselves from the capitalist reality. Although Wall Street is also a creative way to deal with vacancy (the building was abandonded for years), they don’t receive any subsidies, they do pay rent and employees get monthly salaries. ‘Wall Street is not just a concept: ‘we also operate within ‘the system”.

The two continue questioning what value really is during the GLOW festival. Opposite Wall Street they have set up a light market. Together with Het Goed, which runs second-hand shops throughout the country, a few hunderd lamps have been collected and fitted with a new, long-lastig LED light. In the evening, all lights are switched on, which hopefully makes it a piece of art in itself . ‘Or, in the worst case scenario, looks like a Christmas market.’

WHO Hugo Vrijdag
WHAT Bixie and Escape from the machine

Hugo Vrijdag is a visual artist, studied at the Design Academy Eindhoven and is one of the founding fathers of De Ontdekfabriek, Het Ontdekstation (Tilburg) and De Uitvindfabriek (Breda), together with Chris Voets. He has often designed light installations, but never before did he undertake two light projects as extensive as these. The Bixie is a dragon lion, symbol of the Chinese city of Nanjing, a sister city of Eindhoven. GLOW Eindhoven and the Qinhuai Lantern Festival in Nanjing have started a multi-year collaboration. Not only do the light festivals exchange light artworks, they also share knowledge and experience and jointly build new works. One of these joint projects is Bixie, a figure that, according to Eastern mythology, drives out evil. The creature will be about four meters high, an impressive monster that is standing in the Victoriapark during GLOW. The Chinese dragon of Eindhoven origin will also appear at the light festival in Nanjing in 2019.

In addition to Bixie, there is another project of Hugo Vrijdag this year. A bird flies above the Smalle Haven, occasionally showing itself to the public. The bird is created by illuminating fibreglass strands hanging above the street. One by one the wires light up. This happens so quickly and in consecutive order that the light lines suggest movement. The artwork is called Escape from the machine, inspired by the eponymous painting that his father Geert Vrijdag once made. There are several meanings to give to the title: escape from the machinery of daily life or even fly away from life itself. ‘Because of the stop-motion effect, the artwork is actually very mechanical, giving it the impression that the technique is also transcending from the machinery.’