In Germany this summer, you can travel on regional public transport for 9 euros a month. Innovation Origins takes the opportunity to visit a number of future-oriented projects. In this episode, we travel to the IdeenExpo in Hannover. 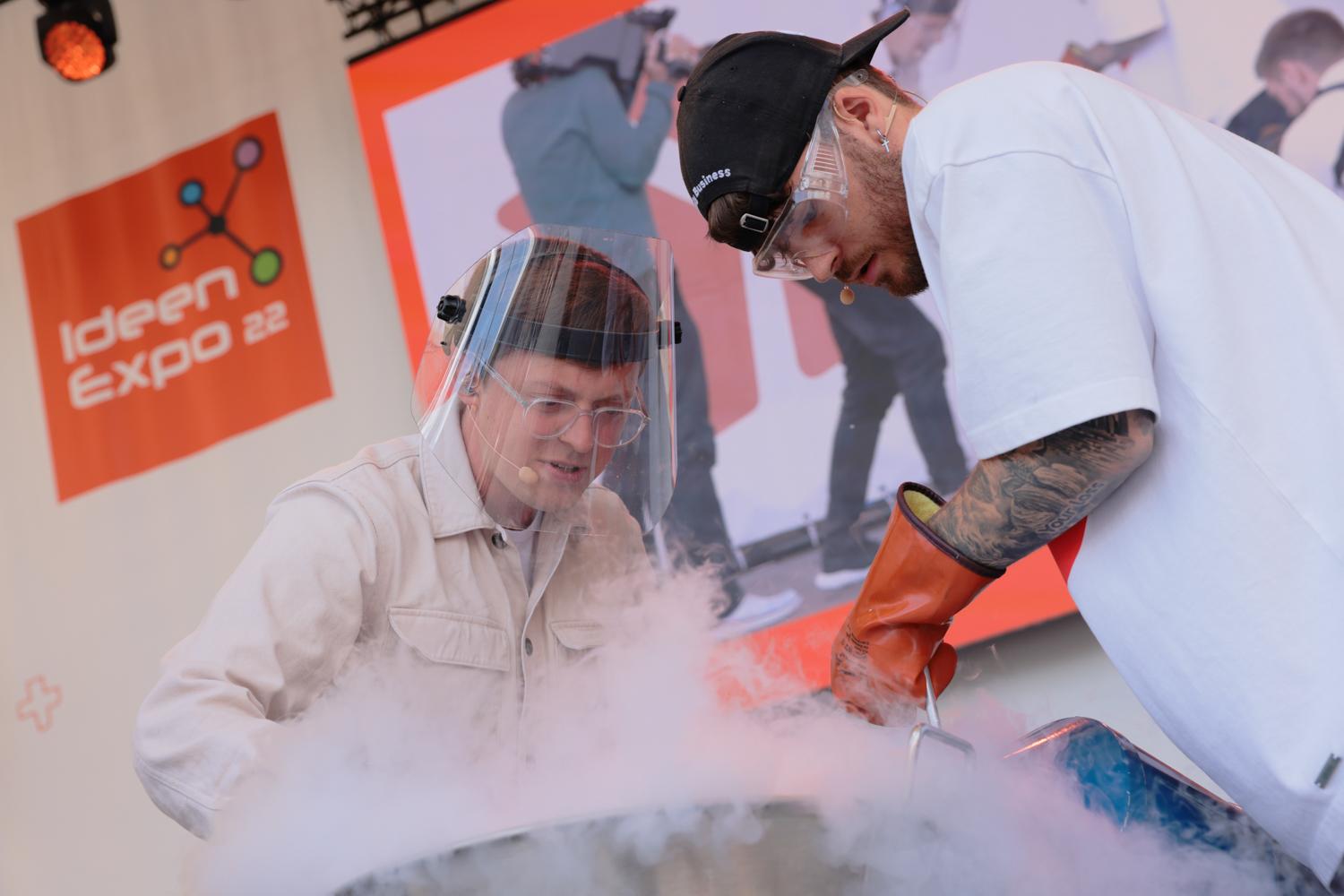 On the road with the 9 euro ticket. Part 2: IdeenExpo Hannover gives young people a push towards nature and technology – Innovation Origins
IdeenExpo in Hannover is a trade fair that focuses exclusively on young people between the ages of 10 and 20.

“A future-oriented project.” That sounds like a good thing, yet that isn’t necessarily the case. There are two such projects in the most northeastern tip of Germany with poor reputations that will be etched in the history books for a long time to come.

In one project, a certain Wernher von Braun plays a leading role. In the other project, Gerhard Schröder, Angela Merkel and Vladimir Putin were at the helm. It is up to the current German Minister of Economic Affairs Robert Habeck to salvage what can be saved in that last project – Nord Stream.

For our trip to Nord Stream, we take the regional train to Stralsund, a fairly large city in the north of Germany that marks the access to the island of Rügen, the grand inspiration of one of Germany’s most famous painters: Caspar David Friedrich.

We don’t travel that far, however. In Greifswald, a medium-sized student city and the birthplace of Friedrich, we hop off the train and continue by bike toward Lubmin. The distance is just over 20 kilometers in a northeasterly direction mostly along the coast.

Lubmin is a beautiful seaside resort along the Baltic Sea with about 2000 inhabitants and at least as many tourists. What’s special about this place is that its seawater is almost sweet. That’s because a few smaller rivers flow into the sea here, it’s relatively shallow and the Baltic Sea is in any event sweeter than, for example, the North Sea. This makes it pleasant and safe for children to swim in.

But there is something else that makes Lubmin even more special. You don’t notice much of this in the town itself, but a few kilometers further east along the coast – where a large marina lies – is also where a gigantic energy complex starts.

It is here where much of the Russian gas is brought into Germany via Nordstream 1. It is a site several kilometers spanning several kilometers in length, featuring overground pipes typical of gas, as well as a slew of buildings and a power plant. And it’s all in picobello condition, with newly built roads and fences. There is even a railroad line.

Clearly, a great deal has been invested here. Partly utterly pointless, because as most people will be aware, Nordstream 2 (there are two gas pipelines running through the Baltic Sea) will probably never be put into operation. Russia and its appalling attack on Ukraine are to blame. However, the Nordstream 1 pipeline, which has been in use for the past decade, has kept the gas flowing even in recent months, albeit at a lower rate.

Owing to ‘technical problems’, capacity has dropped down to 40 percent. The biggest fear in Germany is that this will drop down further to 0 percent this month.

Last week on Monday, July 11, major maintenance began on Nordstream 1. Small robots inspected the more than one meter thick 1224 kilometer-long pipeline to make sure there was no damage. Normally this takes 10 days, but it can also take as long as two weeks.

Minister Habeck fears that there is a real chance that the Russians will use this “Wartung” (maintenance time) to turn the gas tap off completely instead of opening it a bit more.

This will probably lead to shortages not only in Germany but throughout the whole of the EU. In Germany, the highest state of alert will most likely be declared at that time. The government in Berlin is already in intense discussions with employers and employees about which sectors will be disconnected from the gas grid first. The final control will be in the hands of the “Bundesnetzagentur”, the German federal network agency.

In the meantime, the population and businesses are being prepared for a harsh winter with major economic impacts. How extensive exactly is difficult to say. If major industrial companies like BASF, Bayer and Thyssen Krupp are permitted to use less gas, then that will be a bugbear for them, but also for all those other companies that are waiting for their goods.

Some economists are worried that the already existing problems with supply chains will then worsen, further driving up inflation. Hundreds of thousands of jobs would also be at stake. The economy could shrink by more than 10%, which would be much more than during the credit crunch and corona. Others are endeavoring to placate tensions and are cautioning against doom and gloom.

No wonder it’s ‘talk of the town’ in Lubmin. In a little bar on the beach, a couple from Cologne wonders why the Dutch don’t step up to the plate with more gas. “After all, we also helped with hospital beds during corona times,” he says. Soon others join in the conversation. For example, someone else explains that it is down to the earthquakes in Groningen. The overall conclusion is that Nord Stream has been one of the stupidest decisions of the various Merkel governments, which has resulted in an enormous dependence on Russia.

The concerns are considerable, but the lure of the beach compensates for a lot. And what should be done about the gas plant in Lubmin? Plans are in place for that. They are pinning their hopes in Lubmin on liquefied natural gas, LNG.

The furthest developed plans in Germany are for an LNG terminal in Wilhelmshaven. Construction has already begun. The hope is that this terminal will be ready by the end of this year with a maximum throughput capacity of 7.5 billion cubic meters (m3), enough to cover 8.5% of Germany’s demand.

The owner of this terminal, by the way, is Uniper, the company that applied for state aid two weeks ago because it has since run into problems stemming from its heavy dependence on Russian gas.

A second LNG terminal is being built in Brunsbüttel (near Hamburg) at the mouth of the Elbe River and the beginning of the Kieler Canal. The Dutch Gasunie company is also involved in this terminal. In principle, it should also be ready by the end of this year with a capacity of 4 billion m3.

Whether there will be a third terminal at Lubmin is still not altogether a given. According to German media, the company Regas is working on a 4.5 m3 LNG terminal in partnership with Gascade, which manages onshore gas facilities. That way, something could still be done with all the investments in and around the Nord stream pipelines.

After seeing the gigantic gas plants and power plant, it would be a shame not to cycle a little further along the coast towards Poland through one of the most beautiful and touristic areas of Germany.

This is especially true of the outstretched island of Usedom, with such fashionable seaside resorts as Zinnowitz and Heringsdorf. The island extends into Poland, where it reaches the city of Świnoujście, where the Poles have their major LNG port (the Lech Kaczynski Terminal).

But my destination is Peenemünde, at the very beginning on the most northwestern tip of Usedom.

At one time, what was probably the most controversial and advanced high tech center in Germany stood here. Nothing is left of it now, as the Russians looted and razed it to the ground after World War II. Understandable, because in Peenemünde, from 1936 onwards, is where the most terrible weapons of the Nazis were developed, such as the notorious V2 rockets.

One other rocket that was developed there, the A4, is known as the first rocket to make it into space at an altitude of 84.5 kilometers. As such, the A4 was the founder of modern aerospace, as well as all long-range weapons.

Peenemünde was in the perfect location, with plenty of room for military exercises held over the Baltic Sea. The buildings and tracks were largely constructed by forced labor from concentration camps. Parts came from all over Germany.

The center was under the leadership of Walter Dornberger, but the technical leadership was in the hands of the infamous engineer Wernher von Braun. Both would enter the service of the Americans after WWII (Operation Overcast, later known as Operation Paperclip), with scores of other scientists to help the Americans build better rockets than the Russians.

That’s how things go during wartime, of course. Nothing is sacred. Nowadays, the only reminder of this grim episode in German history is the Historical-Technical Museum at Peenemünde. It is housed in the only building that the Russians did not blow up – the power station.

We set off from Peenemünde and head for home. A last swim, a glass of punch and a herring in Zinnowitz, then tired but content, we catch the train back via Züssow to Berlin.

On the road with the 9 euro ticket. Part 2: IdeenExpo…
Less traffic jams in Germany with the 9-euro ticket
On the road with the €9 ticket - Part 1: a visit to the…
The cargo bike symbolizes the controversy around mobility in…
Germany is fully committed to hydrogen, and the Netherlands…
DIW study: If Germany wants to, it can get rid of Russian…