Ten startups from Eindhoven have been honoured with the Gerard and Anton Award 2016. The jury of the awards thinks these ten have all it takes to follow the footsteps of Gerard and Anton Philips who, 125 years ago, formed the first truly successful startup in the region. Every day we highlight one of those startups. Today: Microsure.

Here are all ten winners

Here’s everything on the Gerard & Anton Awards

The curation of lymphedema: in the medical world it sounds like a desirable goal. But startup Microsure from Eindhoven is showing that this is possible, with the help of an assistant robot. E52 speaks with Ferry Schoenmakers, one of the developers of the machine.

“The TU/e has enjoyed many successes in robotics. MicroSure is a spinoff delivering a real quality of life improving technology, based on the knowledge developed within the university.” 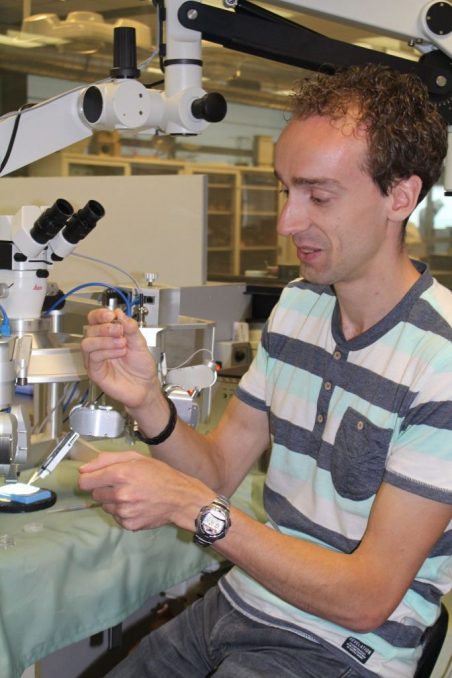 With a huge smile on his face Schoenmakers shows the first prototype of MicroSure. This model has been tested at the University Hospital in Maastricht on ‘silicone tubes’, and later on animals as well. “Look, these vessels are attached to each other,” Schoenmakers says proudly, pointing to his hand on which he has laid the extremely small pieces of silicon that are attached to each other. Schoenmakers himself has also learned to attach vessels with the robot, though it is by far not as smooth as when surgeon René van der Hulst operates the robot.

Van der Hulst, the head of the Department of Reconstructive Surgery at the Academic Hospital Maastricht, and his colleague Tom Mulken, asked the TU/e to develop a robot that focuses on microsurgery. The old familiar Davinci (a widely used surgical robot) proved to be unsuitable for these operations. This device, which weighs over 600 kilos, was too big and bulky. A compact and inexpensive robot that focuses on microsurgery had to be built. Schoenmakers: “Van der Hulst feared for his job, since people after their fiftieth birthday have a less steady hand and microsurgery is therefore virtually impossible.” 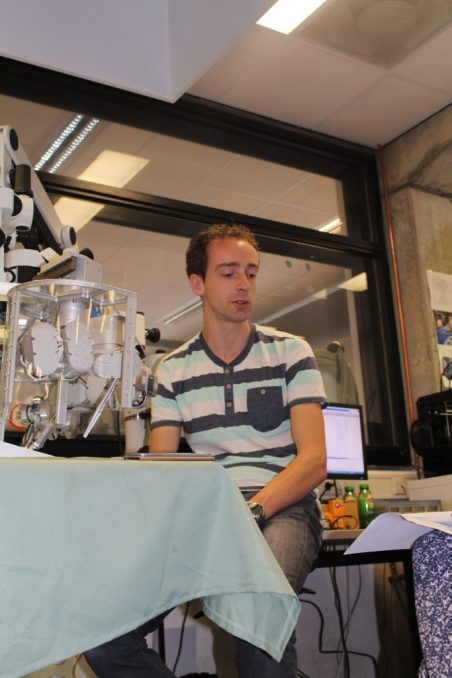 Now it’s time for Schoenmakers and his colleagues to bring the Microsure robot to market. “We have attended surgeries to experience what the real problems are for the surgeons. It helps that I can stand the sight of blood”, Schoenmakers laughs. “We were amazed by how full the operating rooms already are. So our device cannot take up much space and the surgeon may not trip over the cables. Also, the sterility is of great importance.”

The device consists of two robotic arms and two “joysticks” that are controlled by the surgeon. The robotic arms which hold the instruments are to be placed under the microscope. Six axes enable the movements of the hand, and a pinching gesture with which the tools can be operated. By using the joysticks, the surgeon operates the robot arms. Unwanted vibrations are filtered out and all movements are reduced. With a foot pedal, the speed can be slowed or the motion be put to a stop. “A surgeon can pause and perform actions step by step.”

This can actually be called a robot? “No,” he laughs. “It is nothing more than a dumb device that copies the movements of the surgeon. The word robot is actually wrong.”

The main focus of the machine is on the healing of lymphedema, an accumulation of lymph fluid in, for example, an arm. The causes may vary, for example, after surgery, radiation, infection, or even medication. Also, women with breast cancer frequently suffer from lymphedema after the removal of a lymph node. “Doctors normally don’t dare to do an operation like that. A lymph vessel is small and it is a delicate tissue. These vessels have a diameter of 0.3 to 0.8 millimeters. In comparison, a blood vessel is four times as large. Normally, tissue of less than 1.5 millimeters can no longer be operated by hand. Also, for the repair of fine blood vessels and nerves, for example, within the neurology and vascular surgery, the Microsure robot can be used to allow for new treatments.”

Of course there are opponents to the robot, says Schoenmakers. At conferences they face them. “Especially older surgeons think that a robot has no value because they have always worked with their hands in the past. But after we take the conversation to lymphatic vessels, they start to see the advantages. At present there are only a handful of surgeons who can work without robot, with varying results.” Also, money plays a role. However, the robot is relatively inexpensive with a price between 200,000 and 300,000 euros. As a comparison: the Davinci cost 1.7 million with annual maintenance costs of 150,000 euros.

MicroSure is in negotiation with several interested hospitals. The Maastricht hospital has already purchased the first system.

A major challenge for the startup remains in the communication between technicians and surgeons. Often there are misunderstandings. Schoenmakers says this is the hardest part. “It’s still tough, but the cooperation is getting better. We are medically more educated, they have become more technical.” 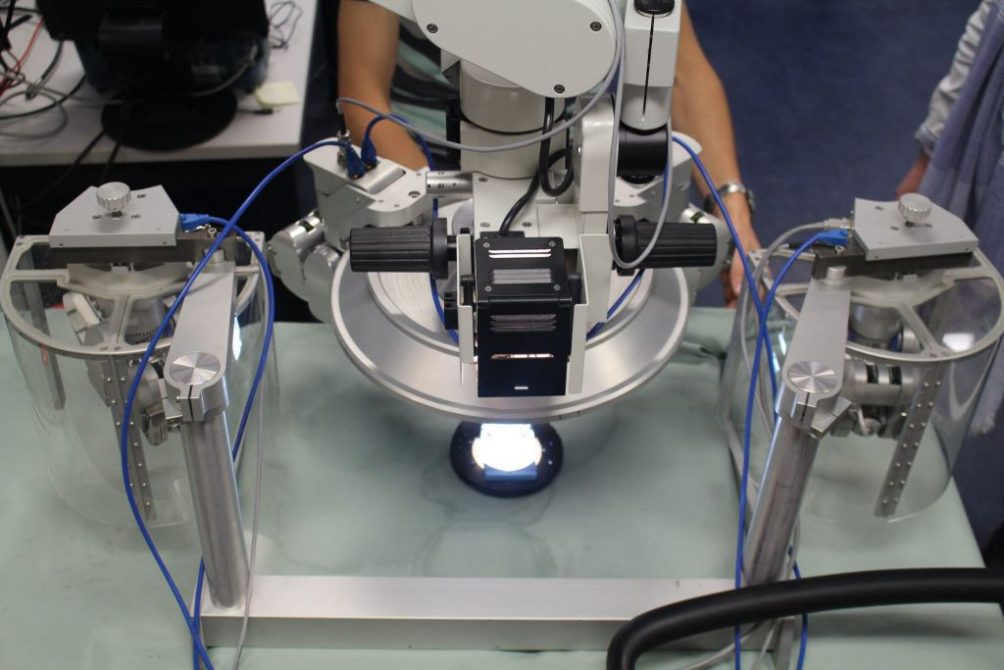 In the distant future, the unit will deserve the name ‘robot’. At least that’s what Schoenmakers hopes. A robot with artificial intelligence, which can prevent stupid mistakes by a surgeon or even take over parts of the surgery, Schoenmakers believes it is possible. Occasionally, the team has been experimenting with it. “I estimate that this is possible in twenty years.”

At this time, the purpose is to get all the needed certification, and sell it worldwide. “Microsurgery is booming, I can see this at the conferences we attend. There is no direct competitor, but we do feel the pressure to hurry up.” In 2017, the first lymphedema surgery is planned. “If we succeed, we have a new field of surgical expertise.”

A quick advice from CEO Carmen van Vilsteren to become a successful startup: