The milking robot from the Dutch Lely Groep has reached the finals in the Industry category of the European Inventor Award 2019. Innovation Origins spoke with the inventors Alexander van der Lely and Karel van den Berg. The winners of this prestigious prize were announced on Thursday, 20 June 2019 in Vienna.

An astronaut is connected by cable to the spacecraft yet is able to move freely in space. Lely Group also wanted to make this possible for cows during milking. When a cow enters the milking shed, a robot arm slides under the cow’s body and controls the milking process. During the milking process, the nipple cups are mounted using laser technology, while the cow has access to a feeding trough. Sensors register the cow’s movements so that the robot arm can track its movements.

This milking method enables cows to set their own pace. The milking shed is available 24 hours a day to the cows and can be freely accessed by them. According to the inventors, the self-selected time relieves the cows of any stress and increases the daily milk yield by 1 liter per cow.

In addition, the milking shed allows the farmer to monitor feed intake and milk yield. The mark on the cow’s collar is scanned for data collection. Data analysis software provides the farmer with the information that they need to maintain the health of their animals and improve their business operations.

An interview with Alexander Lely and Karel van den Berg. 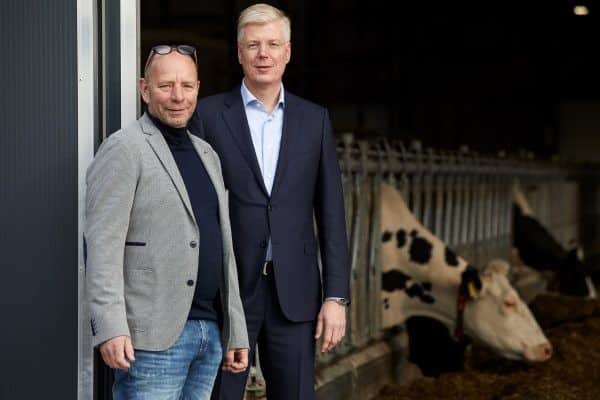 The Lely Group has 1600 patents within the agricultural sector. Have you memorized all of them?

Lely: “No, (laughs). The oldest patents have already been around for twenty years. I won’t remember them. But our patent team knows all of them.”

Are all of the patents in use?

Van den Berg: “No, if we have an idea, we not only patent that one idea, but also all the ideas surrounding that idea. So we apply for different patents, but we don’t use all of them.”

The Lely Group is not only active in the milk sector, but also in sectors such as nutrition and bovine health. What do you have the most patents for?

Lely: “For the robotic milker. Product development started in 1985 and since then we have applied for patents. All other patents relate to the robotic feeder we launched ten years ago.

In the Global Innovation Index 2017, the Netherlands ranks third on the list of one hundred and thirty economies. Do you think that the Netherlands offers a geographical advantage to innovative companies?

Lely: “From an agricultural point of view, we are a very small country. We have to do things differently to survive. We need to develop things in order to use every available square centimeter of land and each available drop of water. The Netherlands is known for its future-oriented agriculture.”

Van den Berg: “We have a high level of expertise in agriculture – and good technicians who approach things in an open minded manner.”

Lely: “Agriculture is one of the top sectors in the Netherlands.”

You started developing the Lely Astronaut in 1985 and applied for the first two patents in 1986. How many patents do you have in the system??

What was the biggest challenge with the development of Lely Astronaut – and why?

Lely: “With the Lely Astronaut, we wanted to free the farmers from the cumbersome milking process. Our machine are supposed to interact with that five hundred kilos of cow and make sure she has full freedom of movement. The machine had to be sensitive enough to find the cow’s five-centimetre teats, and at the same time, be very robust so as not to break. I think that was the biggest challenge, what do you think, Karel?”

Van den Berg: Yes, locating the teats – a five hundred kilo cow moves and can also destroy the machine. You need an exact position that is both robust and tough …

Van den Berg: “… and also cow-friendly. The cow should come to the milking shed voluntarily. This only works if she likes the robot. But she also comes because of the food that she finds in the milking shed.”

How did you solve that problem?

Van den Berg: “Sensors on the end of the robot arm enable the machine to detect the distance to the teats. But the laser scanner also helps to locate the teats.”

Van den Berg: “But also the belief that you can make it is very important. At the time, there were other companies examining this issue. It is the belief in one’s own ability and determination. Believe in something, stick with it and accept nothing less than the best solution.”

Was there a point at when you wanted to give up?

Lely: “There was a certain point when we had to choose the best technology. We had a long discussion before we agreed upon the laser scanner. That was a big investment for us – as a very small family business at the time – which required a lot of courage.” (laughs)

Van den Berg: “Later we were very happy that we decided to use the laser scanner.”

And: what innovation can we expect from you in the near future?

“We can’t reveal that yet, it’s a secret. If you write about that, we won’t get a patent anymore. (laughs) Our research is always concerned with dairy farming and we are currently working hard on an environmentally friendly solution for manure. We want to create a circular economy among dairy farmers. Knowledge about the effects of manure has been somewhat overlooked as a result of the use of fertilizers. Cow dung and urine from cows contain a lot of minerals. However, at the moment manure is just seen as waste that produces CO2 emissions. We want to bring manure back to the fields. Although not in its original form, but in such a way that it has the same effect as fertilizers have.”

About the Lely Group

The company was founded in 1948 by the Lely brothers in Maassluis. The occasion was the first invention – a combine harvester. Meanwhile, the number of patents has grown to 1600. The technologies are in the field of milking, feeding, animal health, dairy welfare, management systems and large dairy farms. The group, which is still a family business, employs 1,200 people and has an annual turnover of 506 million euros. Since 2004, Lely has been led by Alexander van der Lely, from the family’s second generation. He studied production and operational technology and, together with electrical engineer Karel von Berg, developed the Astronaut automatic milking systems.

Read here what Innovation Origins previously published about Lely and the other Dutch nominees.

The Space Week shows the social importance of space for…
Dutch Technology Festival brings top of Gaming & Esports to…
'Universities should build a Silicon Valley around…
Fontys lectorate Move to Be gets young children moving
PEF is the new PET
New heart valves and blood vessels made from your own tissue
Manage Cookie Consent
We use cookies to optimize our website and our service. Help us to make our site better by accepting all cookies.
Manage options Manage services Manage vendors Read more about these purposes
View preferences
{title} {title} {title}