They consciously kept themselves under the radar. With their, as they say themselves, simple but innovative idea. If they were to reveal too much about it, others would be able to get away with their idea. After two and a half years it is time to ‘claim’ their idea. Arno Hermans and Victor Beerkens, owners of 3Dmouthguard make their idea, a 3D-printed sports mouthguard, reality. Last Sunday was the “technical launch”, before of the match Oranje Rood – Bloemendaal.

It all started on the couch on a Sunday night. After an afternoon of reading about technology and innovation and seeing scoring athletes smile, Hermans had an inspiration. Smiling with a mouthguard: What if you can make such a mouthguard without ‘gypsum’ and all those other manual actions with a 3D printer?

“Did you lose your mouthguard: just press on a button and you have a new one”Victor Beerkens, Co-founder 3Dmouthguard

That was September 2015. Just before they launched Sport eXperience, an acceleration program for startups that focus specifically on the sports. That program has started and spread to Copenhagen. Beerkens: “Arno asked if we could do something with his idea. It was an ideal moment to experience for yourself how to get from an idea to a product. With that, we actually validated Sport eXperience.”

A quick market survey, at home on the couch, showed that there are 3 million fieldhockey players and a same number of rugby players around the world, Hermans says. “Which of course does not mean that they all belong to our target group. But shows it has potential. “Since August 2015, a mouthguard in hockey is mandatory. You can buy it at the Perry Sport or Intersport or let it be customized by the dentist’s. The first is relatively inexpensive but it has not been proven that such a product is really safe and the latter is a time-consuming process, and thus an expensive process: gasping, making a mold and folding the bit around the teeth.

The collaboration with NHL Stenden Hogeschool Emmen soon followed, the only university of applied sciences in the Netherlands which educates materials science. Hermans and Beerkens asked them, in late 2015, whether if it was even possible to make such a 3D-printed mouthguard. “Yes, I immediately saw that it was”, Jan Jager says, part-time lecturer at Stenden and involved in the research of plastics and the development of new products with materials that are degradable. “We were already working on 3D printing ourselves and this idea appealed to us very much. Everyone can see the benefits.” He, in turn, started to look for a material that would be flexible and safe enough to make such a mouthguard. In which he was joined by Corinne van Noordenne, researcher Green PAC. They found this material at DSM, Arnitel, a flexible and 50% biodegradable material.

That is the material part, a print of the teeth also had to be made. They ended up with Carestream Dental, who develop inter oral scanners among other things. This international company is a division of the former Kodak. “With 8,000 employees, a head office in Canada and Paris and a small office in the Netherlands, so not one of the smallest players,” Hermans says. Carestream Dental also joined  Hermans and Beerkens. 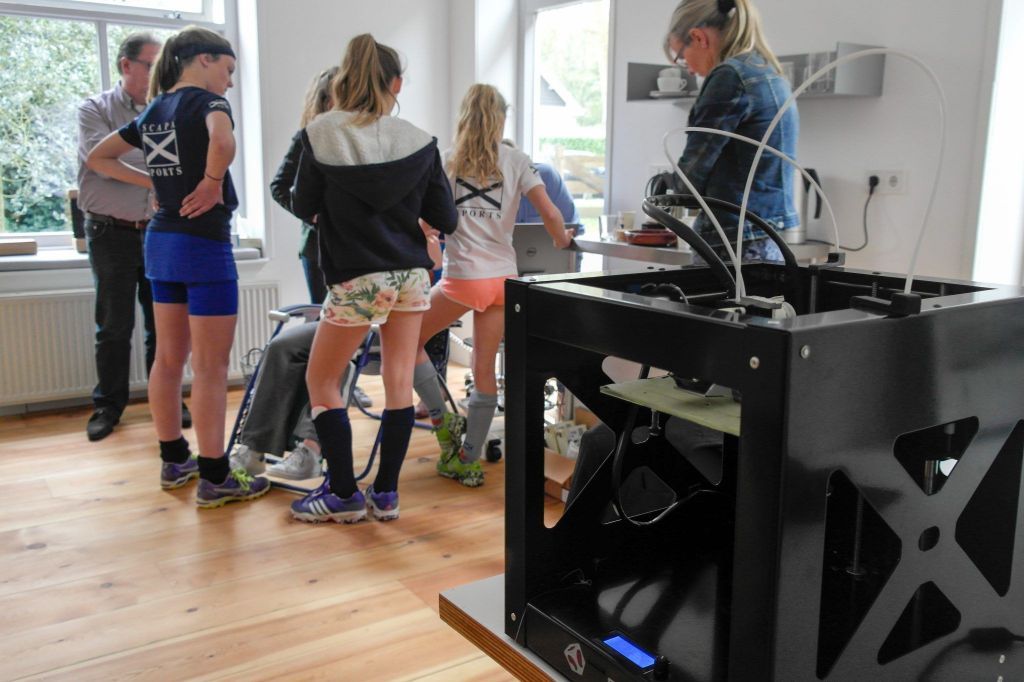 The first tests were at the home of former hockey player and international Teun de Nooijer. With whom they came in contact with via Princess in Breda. On a camping chair, with the 3D printer from Stenden and the scanner from Carestream Dental the dentures of players from Bloemendaal were scanned. Beerkens: “What we did not expect was that scanning alone was so interesting for those kids. They were all standing around a player watching his teeth being scanned, like a magnet.”

What followed was a period of validation and tips. Hermans: “Especially those young girls find it so dirty that mucus comes out of your mouth when they take out their mouthguard. If we could do something about it.” And the got the tip that the material should be able to get washed in the washing machine, a mouthguard sometimes stays in the sweatpants. 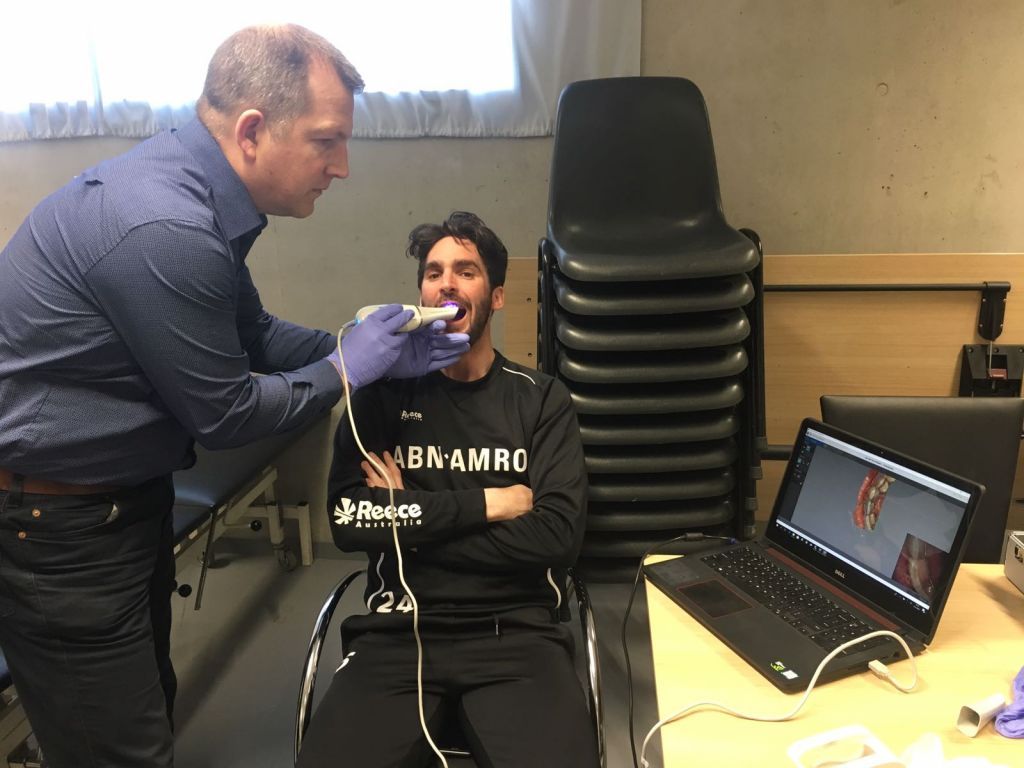 Richard van der Oost is CTO of 3Dmouthguard. Because he thought his study mechanical engineering was boring, he started, at the age of 20, his own company in 3D animation. That company grew and now he has three companies. Beerkens approached him to develop the software which can read the scan and translate it into a picture readable for a 3D printer: what is the bottom of the teeth, what are the lowest points, what is the front and how do you get that fit in a mouthguard? Van der Oost: “It actually took all 2017, but in January it really worked. Last week we scanned the teeth of Robert van der Horst (player at Oranje Rood), which we printed today.”

For the last link in the whole process, they found a Latvian company, Mass Portal. A partner of DSM, with customers all over the world and maker of printers that can work with Arnitel, the material the mouthguard is made of. Kristaps Bumbulis develops these kinds of printers and for him this is an interesting project: “For us, sport is a totally new market. And you need material that is flexible enough and strong enough.” Inside the printer it is 270 degrees Celsius and that cools down again because layers must be hard before the next layer is printed, Bumbulis explains. In total, such a mouthguard has 300 layers and it now takes about 30 to 40 minutes to print it.

In the coming months players from Oranje Rood and Bloemendaal will test the mouthguard. Probably followed by rugby. Hermans: “There has been a first orientation with the Dutch Rugby Federation.” In this period of time we want to find out if the mouthguard is comfortable and how the can improve it. The material must also be safe and hopefully the Food and Drug Authorization (FDA) will give their results this month, Hermans says. “The individual components have already been approved but not as a whole. DSM will soon know whether we have taken this hurdle.”

Hermans: “We are ready to let the world know that we, with our partners, can digitize and automate the entire process.” Beerkens: “Everything is coming together now. Two years ago there was, for example, no 3D printer that could work with the material.”

You can not buy such a mouthguard yet. From the beginning of 2019 Hermans and Beerkens expect that they are ready for the “commercial launch”. From then on you it is possible to have your teeth scanned in the clubhouse, at the dentist or even in the pub, press a button for sending and your mouthguard comes out of the printer. The price will be between 60 and 80 euros. The same as what you pay at a hockeyclub at the moment, Beerkens says: “We can scale up and perhaps lower the costs. But you only have to scan your teeth once. Are you tired of it, do you want a new color or do you lose it: just press the button and you have a new one.”

3Dmouthguard is one of the startups that received a grant in 2017 from the stimulation fund of the Metropoolregio Eindhoven.