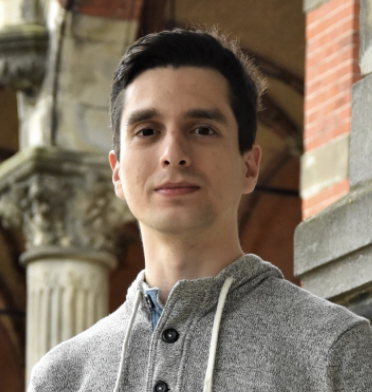 When career TV journalist Cameron Price saw the broadcast news industry struggling, he launched a start-up to solve one of the industry’s biggest problems: lack of money. Together with co-founder Cheyne Wallace, a software engineer with experience working in Silicon Valley, he started LeadStory. A on-demand personalised news streaming platform featuring big names such as Reuters, Fox News, and Deutsche Welle.

After recently winning the start-up contest at the DW Global Media Forum in Germany, Price makes the case for an independent player in a field controlled by the tech giants that motivates newsrooms while providing users with free quality content in this edition of start-up of the day.

“We’ve seen many parts of the television industry disrupted by Netflix and Disney disrupting movies. But in terms of the broadcast news space, we’ve not seen anything other than individual news networks having their own apps or smart TV platforms. We initially saw an opportunity there to try to leverage economies of scale to bring in better revenue for publishers. Not just the big ones but also to the local broadcast newsrooms. We’re continuously finding that a lot of the problems publishers are facing is the lack of money they make from big tech and social media platforms. Our focus pivoted to trying to help news networks make money off the clicks they receive online.”

Right now publishers can post videos on social media for free, why are you different?

“We are providing a platform that allows news publishers to better monetise their clicks. We don’t only offer advertising, we also bring in multiple revenue streams, polling, and data analytics. Over time, we’ll move into tokenism and Web3 enabled monetisation for news platforms. So we’re moving away from this idea that the only way to monetise news is either via subscription or advertising, and instead, we’re introducing new revenue streams into the mix.”

Robot journalists make inroads in newsrooms, but not without human colleagues
Robotic journalists are on the rise, and that has advantages and disadvantages. On the one hand, news can be much more personalized. That offers opportunities to serve people even better. But it can also cause people to end up in a so-called filter bubble.

Which of these funding models have the best potential?

“We just received a government grant to build up polling. The idea is that people are more inclined to answer questions that relate to the content they’re watching. So the poll questions will come up over videos that relate to the content that a user is seeing. Studies have shown that this vastly increases the rate of responses. As an incentive, people answering poll questions get 2 weeks ad-free on LeadStory.”

What’s in it for the newsrooms?

“Everything we do is designed to drive revenue back into the newsroom. So every business decision we make, we look at a core set of principles and at the very top of that is: Will this benefit the newsrooms? And that is at the centre of everything we do because in my experience in the industry I was seeing far too many good journalists go into PR or seeing far too many good cameramen, editors, and producers leave because there wasn’t the budget to give them adequate pay. And even worse, important stories didn’t get covered. And so our driving motivation is to improve the revenue outcomes for newsrooms and make sure that the important journalism that the broadcast news industry does is allowed to continue. Next month, our pilot customer will go from making no revenue off their online clicks to making enough to hire 3 journalists. And that for us is at the absolute core of what we want to achieve.”

“We’re very early. So we only got a product out in the market in March 2022. And so the challenges we’ve faced have been very much from a technical standpoint, trying to create a product that can service a piece of content that goes viral, so that it can get 100 or 200 or 300 million views. That’s not easy. In terms of the product itself, it is remarkable for something being less than 6 months in the market with no outages. So it’s not been too much of a problem yet, but maybe ask me again next week.”

How does the process work for publishers?

“It’s entirely up to the publisher to choose the content that they bring onto the platform. Those that have content with associated metadata have better monetisation across Facebook, Twitter and YouTube. We have a pilot that starts next week to test the platform and make sure it works in the way that we hope it will. That will bring 1 to 2 million monthly impressions across the publishers’ social media channels to our platform and will help them monetize those impressions. From September, we’ve got a shortlist of 7 publishers across the world that want to come on the platform to do the same thing. I would say probably early next year, we will add more publishers, but we want to grow at a rate that allows our tech to scale well.”

Users can already filter news by region on the big news sites, why do they need another platform?

“Sure, you can go to The Guardian and you get The Guardian stories. If you go to LeadStory you’ll get Al Jazeera, Reuters, CNBC bringing together this collaboration of content partners. Users get an understanding of the topic through a wealth of sources. And that’s what sets us apart from other platforms. We’re bringing together publishers from all over the world – big and small. They don’t just get you global news, but offer news that’s at the local level. But underneath it all is an algorithm that works very differently to the other news networks out there. We are moving away from this binary: ‘Yes, I’m interested – see everything’ or ‘No, I’m not interested – see nothing’ on that particular subject. That’s taken too many people down the rabbit hole. Our algorithm, which is open source, allows people to have levels of interest, and that dictates the types of stories they receive. In our early testing, we found that users have some really high satisfaction in terms of the types of content that shows up on the feed and how that satisfies their news appetite.”

Say "good-bye" to Google and the cloud: this smartphone…
What will building the metaverse mean for the European tech…
Air quality in European cities remains poor
Start-up creates digital infrastructure for heating networks…
Sewing robot to bring fashion industry back to European…
Visualyst uses AI to crawl videos for hate speech, violence,…