Do you walk properly? This question seems simpler than it is. How convenient would it be if everyone had access to advanced motion analysis without a referral to a laboratory? Quite a bit, right! That’s exactly what Utrecht start-up ORYX has in mind.

31-year-old Marjolein van Koningsveld and partner in crime Marcel Tiggelman (35) embraced the challenge of lowering the threshold for high tech motion analysis; be it for senior citizens or for top athletes.

AN ANALYSIS IN 15 MINUTES

“Our technology focuses on the lower regions of the body, such as legs, hips, knees and back,” explains Van Koningsveld. “We measure the ‘quality’ of a person’s movements by attaching sensors to the body. When we then map out how the person walks, jogs, sprints and squats, we immediately know where improvements can be made. Based on this, we recommend individual physical exercises and rehabilitation programmes,” she continues.

The biggest difference between ORYX and ‘old-fashioned’ movement technology lies mainly in the accessibility and the price difference. “This type of data is usually only available after a referral to a specialised laboratory. Here, an analysis is carried out using very expensive equipment, which costs at least 50,000 euros. This technology is very useful and accurate, but it does involve a costly and time-consuming process. This makes doctors reluctant to refer patients. We want everyone to have access to this technology,” says the nominee for the Dutch National Health Innovation Prize 2019. 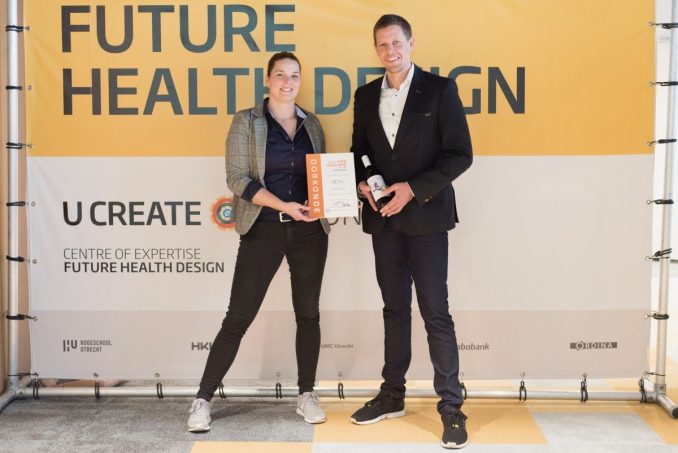 Van Koningsveld was always an avid horse rider, but in 2014 a serious injury forced her to stop. A difficult rehabilitation process followed, involving chronic pain and a lot of frustration.

Still, she managed to make a virtue of necessity. She met her co-founder Marcel, who was in a similar situation, at the gym. He was told that by the age of 50 he would probably be in a wheelchair and that he would never be able to play sports again because of persistent knee injuries.

Instead of giving up, Van Koningsveld and Tiggelman joined forces. They jokingly borrowed a movement analysis device from a friend to see just how ‘poorly’ their condition was.

“Indeed, things weren’t good, but I found hope. On the basis of this data I could see exactly what the problem was – with a combination of very specific exercises my symptoms were resolved within three months,” says Van Koningsveld. The two wanted to make this technology available to everyone to help as many people as possible. And so they did. 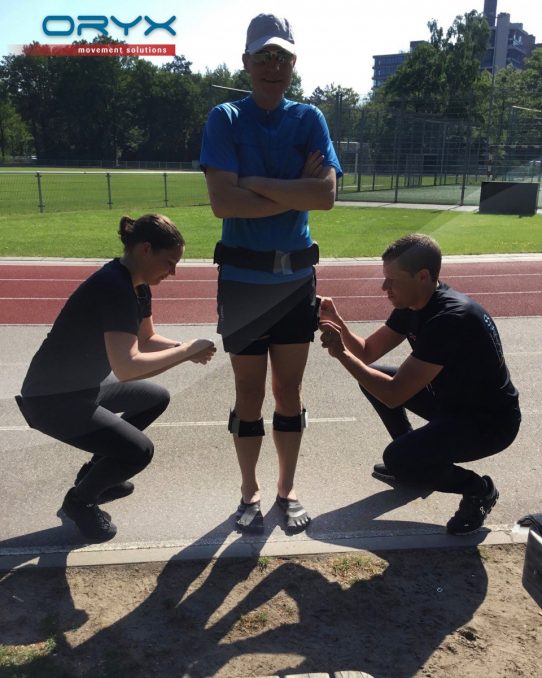 A LIFETIME OF MOTION

When a young child stumbles and falls, it’s usually not a big deal. But what about seniors? In their case, the consequences of an accident can sometimes be so unfortunate that they never fully recover. Breaking a hip after an accident is one of the biggest physical – and mental – dangers for the well-being of elderly.

“My own mother suffered frequent falls and I’ve experienced up close how this affected her and her immediate environment. Maintaining physical activity is one of the most important foundations for healthy and happy ageing,” says Van Koningsveld. “Through our analyses, we know the exact location of problems and so we can respond to them. As a result, accidents and fractures can be prevented. As well as greatly improving the quality of life, it also saves a lot of money that would otherwise be spent on expensive treatment.”

Even top athletes who push their bodies to their limits benefit from ORYX’s smart software. “When the difference between winning and losing lies in just one second or the slightest movement, it is very useful to accurately map out the areas of motion improvement. This allows us to immediately see where a little extra training is necessary. Also in case of injuries, where the body often develops unnatural movements on its own, this is very beneficial,” she says.

PREVENTION IS BETTER THAN CURE

A final difference with traditional rehabilitation methods is the use of easily accessible and understandable data visualization. After all, data is of no use if nobody can read it. “The reports from motion laboratories are often very difficult for physiotherapists to understand. We use a clearly and logically arranged visualisation that is understandable for everyone. This shows directly where the problems are per segment.”

ORYX is currently collaborating with runners and soccer players. At the moment, they are running a pilot project with the National Baseball and Softball Association. What does the future look like?

“I hope that our technology will be used on a societal level at some point. This way, we can help as many people as possible and we can save a lot of money from expensive treatment and rehabilitation costs.

Athletes will no longer suffer the same joint problems over and over again, and employees who suffer from back pain will no longer drop out. Although motion centers will always remain necessary and of course accidents can never be completely prevented, with ORYX we can still prevent a lot of suffering,” says van Koningsveld.

Holland High Tech is cashing in on opportunities for the…
What would Leonardo da Vinci do with our education system?
'Universities should build a Silicon Valley around…
Great, such a smart city; but it does cost you your freedom
The innovative power of a 75-year-old techie with assertive…
Dutch Technology Festival focuses on filling the pipeline of…