The fact that many more people have contracted the corona virus than the official figures suggest will hardly raise any eyebrows. It is even neatly stated each day on the RIVM (the Dutch National Institute for Public Health
and the Environment) website that the actual number of infections in The Netherlands is a lot higher than the official figures they disclose. Last week I wrote to them to express my dissatisfaction that ever since then, only hospital admissions have been disclosed. Instead of the total number of diagnoses at municipal levels.

Even though it’s still a real shame when it comes to the consistency of several datasets, I have now come to understand this decision.The RIVM did point this out itself: ‘due to the fact that very few tests are being carried out in The Netherlands, hospitalization figures give a more realistic picture of the situation.’ Plausible. Given the mortality rates and hospitalizations, the amount of those infected must be far higher than the 19,580 reported on their website. In reality, it is very likely that the 19,580 is not even 10% of the total. A minuscule tip of an immense iceberg. How can this disease kill less than 1% of patients in one country and be fatal in almost 20% of cases in another? 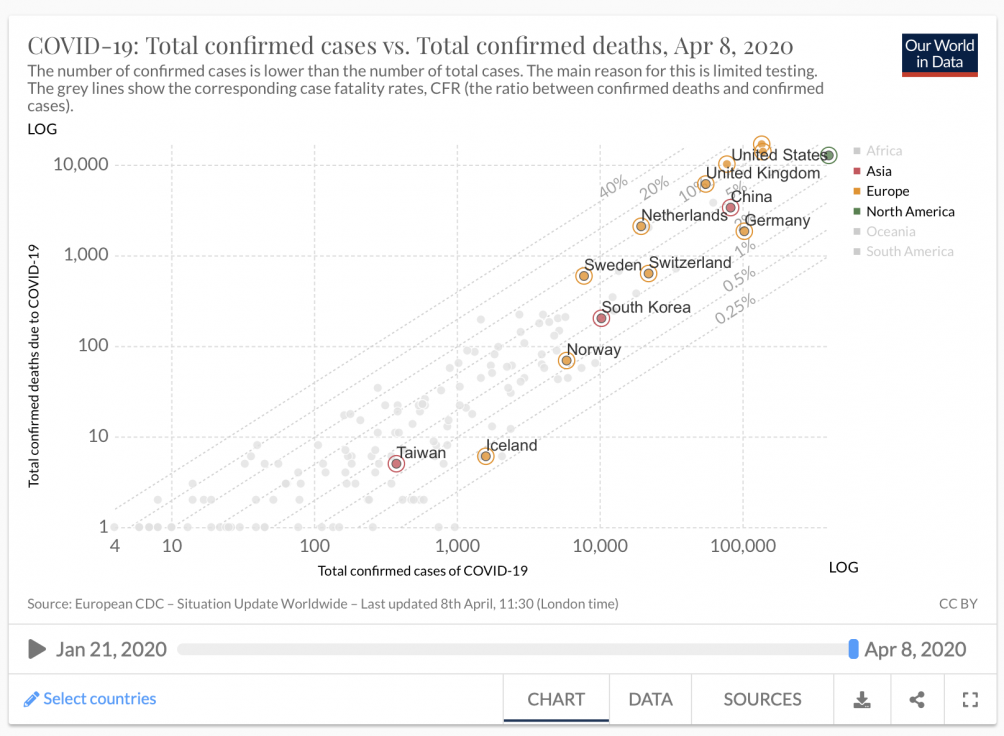 “Testing, testing, testing.” There’s been a lot of screening in the past few weeks. Now this is quite difficult to arrange in a country with millions of residents. Although there are also smaller countries like Iceland. This Scandinavian island nation has fewer inhabitants than the province of Zeeland. Almost 5% of the population (about 18,000 people) have been tested for the virus. And what proved to be the case? No less than half of the Icelanders who tested positive for COVID-19 showed any of the known symptoms. This sounds like good news, but is also a silent killer. Being asymptomatic does not make them immune or non-infectious. In fact, this group played an instrumental role in the spread of the virus.

In the meantime, the penny seems to have dropped in The Netherlands too. A substantial increase from 4000 to 17,500 tests per day is underway, which could be scaled up to 30,000. This certainly doesn’t seem excessive. In The Netherlands, just over 5000 people out of every million have been tested so far. The map below shows how much this represents compared to other European countries. Catching up with the rest doesn’t appear to be an unnecessary luxury. More than 2100 casualties out of an infection count of 19,580, whilst the mortality rate for COVID19 is estimated fairly unambiguously at about 1%. How is it possible that this is almost tenfold in The Netherlands? Either we are dealing with a more deadly mutation of the virus here or the majority of the infected Dutch population is flying under the radar. 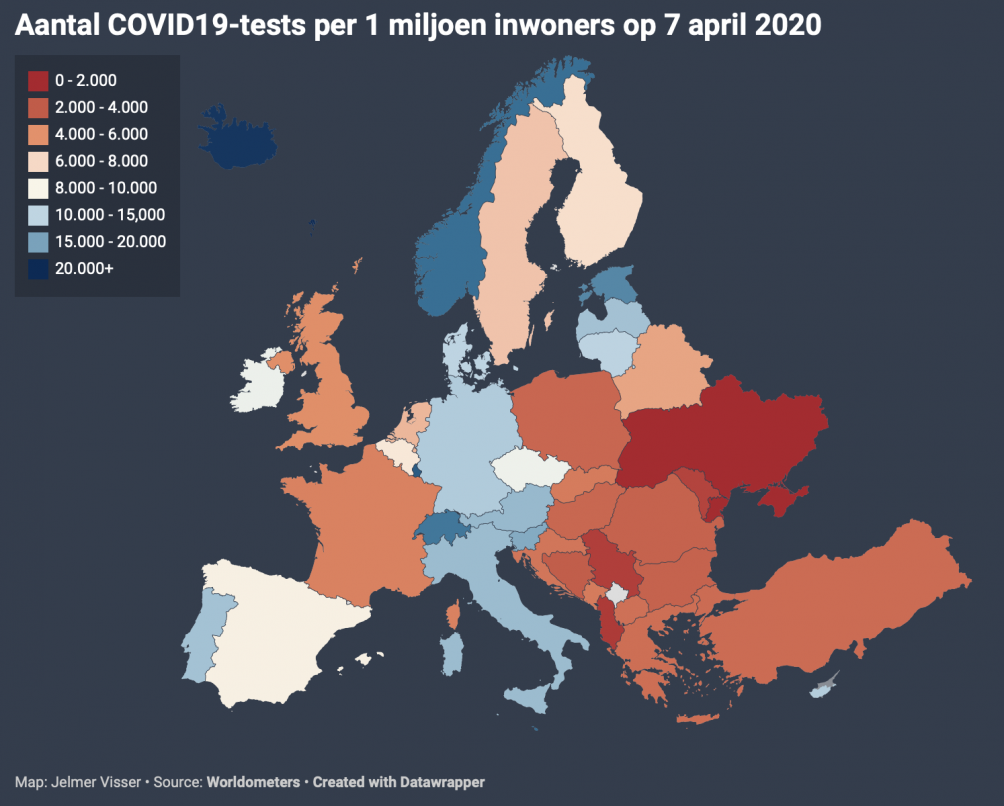 Hundreds of thousands of corona patients in The Netherlands?

How many people in The Netherlands are ( or have been) actually infected with the corona virus can only be guessed at. Except that there are a number of clues in the RIVM data that reveal the extent of the pandemic more clearly. This is undoubtedly the reason why hospital admissions have taken over the main role as of last week.

Nevertheless, these admissions do not tell the whole story. In an ideal situation where adequate tests are carried out, a person is not automatically admitted to hospital after having contracted COVID19. According to a Chinese study from Wuhan, this usually happens around 7 to 8 days after they suffered the first symptoms. But since the situation in The Netherlands is completely different, not much can be made of this.

What about the number of deaths? This picture is slightly more realistic since, clinically speaking, a disease has two final stages: full recovery or death. This is referred to as a closed case. A patient reaches this final stage on average two weeks after the first symptoms have developed. Based on this data and  a five-day incubation period, you may assume that someone who dies today, first contracted the virus around the 17th of March.

However, even this data is not completely watertight as it does not take into account people who die at home. The most reliable figures are the mortality rates from the CBS (Central Bureau of Statistics Netherlands). These figures are nonetheless tallied with a delay of several weeks.

Are mortality rates in The Netherlands far higher than in Germany?

As there are no indications that The Netherlands is facing a more deadly mutation of the virus and as extra testing is being carried out, the Icelandic situation may also be plausible for The Netherlands – and the rest of Europe. With 2100 deaths on the 7th of April, a case fatality rate of 1% and factoring in a 19-day delay, this would mean that The Netherlands had more than 200,000(!) corona patients back on the 17th of March.

That said, the number of diagnoses made on the 17th of March was ‘only’ 1705. This would mean that less than 1% of all infected Dutch people were on the RIVM’s radar at that time. And this is precisely the reason why this figure was no longer considered reliable. This could explain the relatively high mortality rate in The Netherlands. Whereas in Germany this was more or less the same amount despite the fact that almost ten times as many positive diagnoses were reported there. Moreover, both countries do not (yet) have an overburdened healthcare system as is the case in Italy. 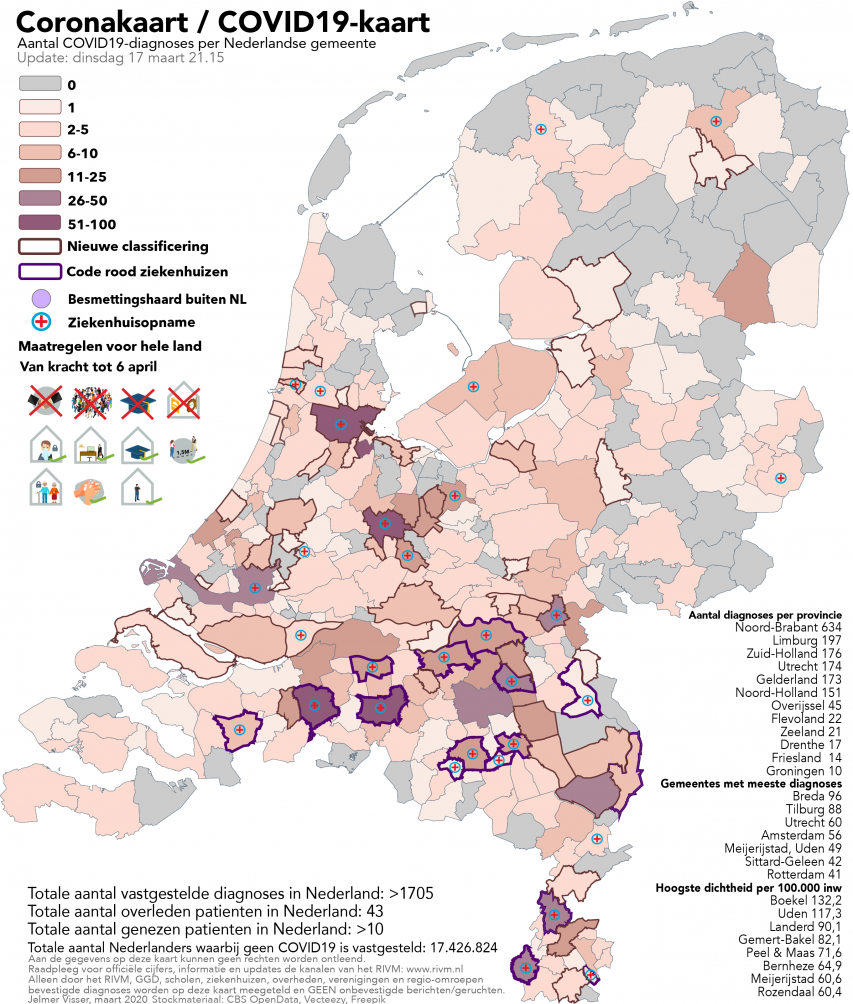 No Titanic scenes in The Netherlands

The magnitude of the situation needs to be mapped out in order to prevent as much distress as possible. The Dutch government wants to do this with a much higher capacity for testing, projects such as the Coronaradar from the LUMC (Leiden University Medial Center) and data from NIVEL (the Netherlands Institute for Health Services Research). Along with ‘smart’ apps that track the movements of corona patients, similar to what happens in Singapore and South Korea. And through cooperation from a population that complies with government guidelines on hygiene, self-isolation and social distancing.

Policy can only be made once reliable figures that are based on that are made available. The most important premise is that the number of people infected by a single patient should remain less than 1, so that the virus eventually dies out. This number would likely currently be around 0.3, according to Jaap van Dissel. Does this mean that the festival season is saved? That’s rather premature given that the extent of the crisis is still not entirely clear. And that this number could rise again if restrictions are lifted too soon.

How can you depict the magnitude of this more effectively? – Make the number of hospital admissions at municipal levels known to the world retrospectively. This way, any researcher, programmer or journalist will be able to help clarify what is happening now based on data from the past in order to be able to make well-founded predictions about the future. Stopping a pandemic is a team effort.