Bjorn van de Langenberg has ‘sports’ running through all his veins, he climbed the Alpe d’ Huez seven times, then made the choice to start for himself and became event manager at Campus Health & Sports Club at the High Tech Campus since last autumn. On 23 and 24 June, the first major event, the High Tech Crit Festival, will be held with competitions, all innovations in cycling and ambassadors such as Lotto cyclist Puck Moonen and LottoNL-Jumbo rider Bram Tankink. “I want to turn the festival into just as big an event as the Marathon of Eindhoven”, Van de Langenberg says.

“I used to be a tree grower. As the oldest of a family of five, it was actually self-evident that I would take over the tree nursery. I did the HAS in Den Bosch and then I went into the company. I was in the business for ten years, but I never felt like I would be getting old with it. Sports was my exhaust valve. First by playing football and then, after many injuries, cycling. In 2013, I was asked to ride along with Alpe d’ HuZes. That event opened my eyes. I saw how sport connects, inspires and fraternizes. Then I knew: I wouldn’t go on in the nursery but follow my heart and that is in sport. Without any training and only my healthy instincts, I started.”

“I use sport as a metaphor to show the importance of team building within the business community, setting goals, training for those goals and ultimately achieving your goals.”Bjorn van de Langenberg, Eventmanager Campus Health & Sports Club

“I use sport as a metaphor to show the importance of team building within the business community, setting goals, training for those goals and ultimately achieving your goals. I started my business with this experience and thinking. Quite soon I ended up in the SX building. Networking is very important and SX is the perfect place for an entrepreneur in sports. As a freelancer, you are taken seriously there as well, so then it really started to work with a snowball effect.”

With his company Super Sport Events, he organizes “all kinds of things”: workshops, sports clinics, presentations by top athletes to companies, cycling tours. During such a cycling café, the idea for a cycling festival arose, but it didn’t come any further than an idea. After becoming a member of Cima Coppi, a networking club for cycling entrepreneurs, he got the chance to do something with that idea. At this networking club, he met Jan Willem Neggers, managing director of High Tech Campus. Van de Langenberg: “He saw what I did there, I was now on the board as a club coordinator and regularly organized events. He saw a great opportunity for me with Roel Voorwald and Laurens van Oosterwijk who wanted to create a Vitality Hub on the HTC. Of course, this includes sporting events and now I am their event manager.” He organizes everything from start2run programmes to football tournaments and now, this cycling festival.

“When I saw the facilities and opportunities here on the HTC, with a Shimano that has its European headquarters here, I thought: we should simply organize this cycling festival here. Everyone was enthusiastic about it: Roel, Laurens, Jan-Willem and the whole management team. I started to lobby a lot and started looking for partners.” Shimano is affiliated and companies such as Strukton, Brunel, VDL, and Rabobank.

Ten years ago Eindhoven still had a team time trial as part of the ProTour, which ended after three years. According to Van de Langenberg, there is a great deal of support for a new cycling event: “Cycling clubs like TML Dommelstreek and TWC De Kempen want to help and organize the races. Besides companies, the municipality is a partner.” According to Van den Langenberg, the power of the event is innovation. “There is so much technology involved in cycling: the bicycle and its equipment, but also in training.”

Like the TU/e wind tunnel. Something that usually only professional teams can make use of because they have a budget, says Van de Langenberg. During the festival, there is a team time trial for which business teams can register. Participants in this time trial may take a wind tunnel test at the TU/e.

Thanks to Virtual Reality, visitors can also experience what it is like to cycle on the cycling track or compete during the criteriums. Van de Langenberg even plays with the idea of having Roy van der Berg, a sprinter at Beat Cycling Club, ride against the eBike Trefecta of VDL, who makes about 70 kilometers per hour, a kind of ‘man vs. machine’. “BEAT Cycling Club is a new Dutch cycling team that has set itself up in an innovative way with crowdfunding among other things. They will organize their fan day during this festival.”

And of course, there is cycling. In addition to the team time trial, there are competitions or criteriums for the youth, women and men, there is a possibility to sprint over the Strip and there are two tours. On Saturday, a tour of 25, 50, 100, or 150 km and on Sunday a gravel trip over the Stabrechtse Heide. For children, there are activities such as a thick tyre race, clinics, and BMX demonstrations.

Initially, the event was scheduled for 16 and 17 June. “We wanted to make the link with the Ster ZLM Tour, a professional competition. For sprinters teams, this is the last preparatory race before the Tour de France. But the start and finish locations for this year were already fixed. So we are postponing it for a week. Next year we’re really going to make that link.” 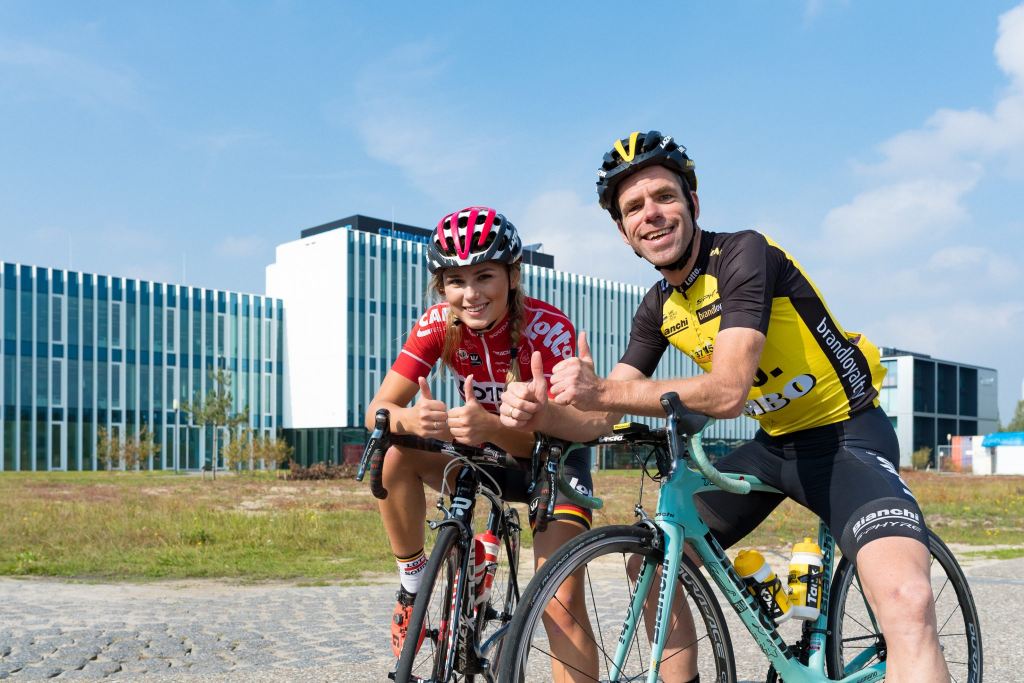 That is for next year. According to Van de Langenberg, the challenge is mainly the outreach. He expects about two thousand visitors and two thousand participants spread out over two days. A lot of good communication is necessary and he receives help from the TU/e and the municipality of Eindhoven. His ambassadors such as Bram Tankink and Puck Moonen are also very valuable: “Puck shared a message about her test drive in the wind tunnel, that was yesterday. She received more than 12,000 likes. I also shared a message myself and tagged Puck, which has already been viewed 25,000 times.”

In addition to the High Tech Crit Festival, Campus Health & Sports Club organizes events such as the mountain bike challenge on 21 April, a football tournament, and a triathlon on 2 September.

In addition to this two-day cycling festival, Eindhoven hosts another cycling event that weekend: the Green Corridor team time trial.