The history of Curacao is quite complicated and we really need Gisèle for some clarification. “Curaçao has been an independent country in the Kingdom of the Netherlands since 2010, just like Aruba and St. Martin. The other islands are special municipalities. At the time that was all settled, I already lived in the Netherlands for a long time,” she says on the terrace of Down Town Gourmet Market, “I came to The Netherlands for my study when I was eighteen years old. At first, I studied English, but after finding out I didn’t like it that much to be in front of the class, I transferred to Journalism. Before I arrived in Eindhoven, I lived in Amsterdam. But for my love, I chose to come here.”

“Eindhoven is very accessible and I think that is very nice. When I decided to live here I said I wanted to taste the city for two years first. I was having a good time in Amsterdam and was wondering if I could find the things I appreciate here too. To me, music is very important, for example. At first, I lived almost in the backyard of concert hall Effenaar, so to speak, and went there a lot. And I can appreciate the cosiness here. This here, Down Town Gourmet Market, is a good example of that cosiness. It’s new and already a success. Eindhoven is just relaxed. The spaciousness in comparison to Amsterdam is a relief. And you are accepted here for who you are, also very important. Eindhoven is a mature city.”

“Eindhoven is just relaxed and you are accepted for who you are, also very important”Gisèle Mambre, Communications consultant

“When I just arrived here, I had to get used to the fact that the nightlife was not or hardly present during the week. Now still many events are being planned in the weekends, there should be a little more dispersion in the programming. And until 2015 I worked in The Hague and I wasn’t often in the city. In fact, since I work in Eindhoven, I can completely immerse myself in the city.” Until recently, Gisèle worked as a communications consultant at Natlab and now she is looking for a new job in the cultural sector. “I’m still involved in Movies that Matter, a project of Natlab and Amnesty International. Go see those movies! ” 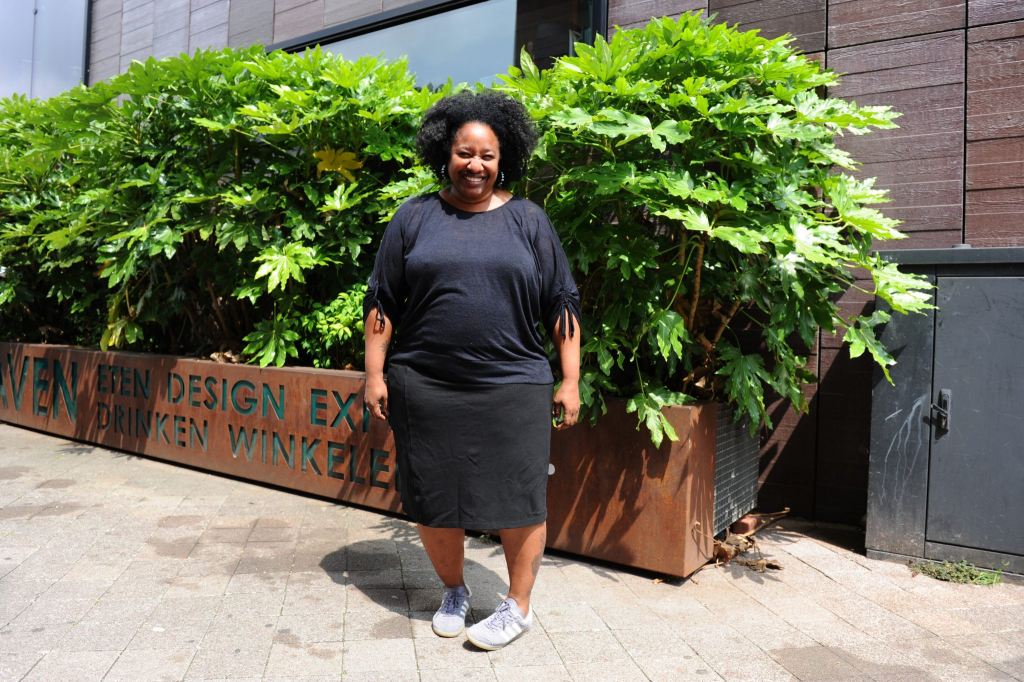 If you move to another country or even another city, building a new social life can be tough. How do you handle that? “When I came to Eindhoven, I just became more active on Twitter. I’ve been following people from Eindhoven and created nice contacts this way. In the meantime, I have built up my own circle of friends. I often meet up with a group of girlfriends and we see each other regularly at café D’n Hertog. It is what I call a Twitter bar, you always meet someone you know. And if I want to go nuts on hard noise, I go to café The Jack. I also like to visit Van Moll or visit the Strijp S area. In all these places you will find the humour and cosiness of Eindhoven, so nice!”