On a Tuesday we go to Microlab where the studio of Gilad is. “Everybody calls me Gili,” he says when he introduces himself. “Let’s go upstairs and have a coffee.” We take the elevator to the sixth floor. On that floor is a communal space where people have meetings, work on their laptop or have lunch. In the room is a beautiful bar, developed and made by Gili.  When we have coffee we start off with the interview. “I came to Eindhoven in 2002 to study at the Design Academy. In Israel, I studied industrial design, in the most literal sense. It was very technical . What a different world I entered at the academy in Eindhoven! I joined the Atelier group where you explore and work with all kinds of materials. The study shaped me as a designer and I learned how to work and think more conceptual. The big difference between my study in Israel and the one here was that I was very free to explore. But you also had to set the bar for yourself. With that freedom also came the discipline to achieve the level you wanted.”

Being at the academy also resulted in something beautiful in Gili’s private life. “One day I saw a girl in the workshop and I was struck. It was Sara. It was such a wonderful moment and I didn’t know such beauty existed. I circled around her for two years before I said ‘let’s go on a date’. When I graduated I went back to Israel. We kept in touch. I was working in retail design, but I felt another ambition. I needed time to think about what I wanted and I decided to go hike the Camino de Santiago in Spain. I talked about it to Sara and it turned out she would be in the same area at the same time, so we made plans that she would join me on the hike. We met in a little village in the Pyrenees. We had such a good time. We had a big common ground and being together felt good. I went back to Eindhoven to be with her and to study architecture. Nowadays we are married and have two children.” 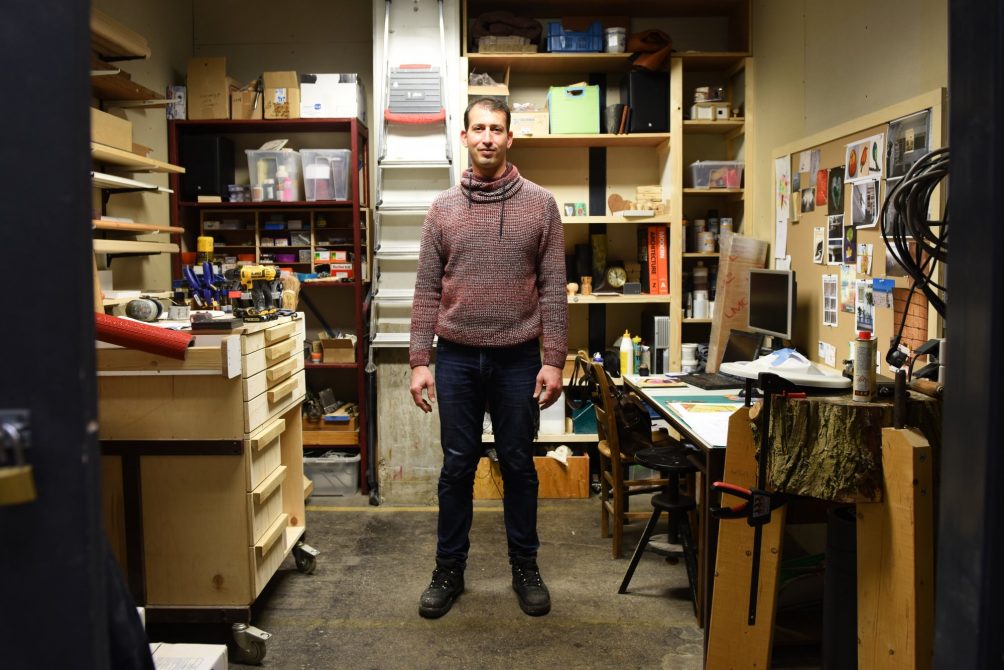 Gili belongs to the group of entrepreneurs who started renting a studio at Microlab when this initiative still was in its start-up phase. “There is always something happening here and I love it. I was working from home until I renovated my house, then something sparked in me and I really wanted to make and create again. Just as I did at the academy, being around other creative people. When looking for a workspace I met Luuk Visser and he shared with me his inspiring plans for Microlab. I liked the idea of shared facilities and wanted to try it for a month. That became two months, and then three… and in the end, I’m  still here, making a living of designing furniture and interiors.  The studio feels like a home to me. I don´t have to bother about other stuff, I can just focus on my work.”

“It is never easy to move to another country, but what I love about the Netherlands is the freedom,” ends Gili his story. “Freedom of mind, to think and be with little judgement about it.  When you are in Israel it is difficult to step aside and take a look at the bigger picture, There it’s left or right. I did take a different route by traveling and exploring the world. Being here also helps me to step aside and see more.”