Ten startups from Eindhoven have been honoured with the Gerard and Anton Award 2016. The jury of the awards thinks these ten have all it takes to follow the footsteps of Gerard and Anton Philips who, 125 years ago, formed the first truly successful startup in the region. Every day we highlight one of those startups. Today: ZENS. Here are all ten winners. 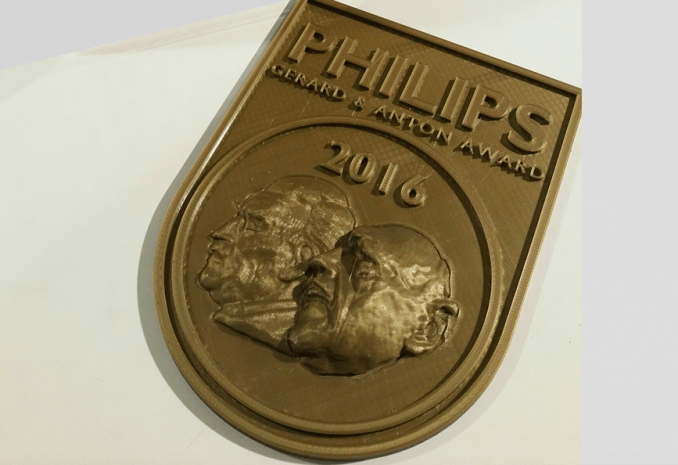 Just put your phone on the table and it starts charging. Thanks to the Eindhoven startup ZENS this technology is developing at a good pace. Erik Plasmans about the origin of ZENS and the future of wireless technology.

The Jury:
Not the best known company in Eindhoven. Nevertheless you might have used their wireless charging technology already. Great products, an invisible force in many ways.

Plasmans proudly holds up the wireless docking station. “Look, this is what it’s all about. You can hide this thing anywhere. Chairs, tables and lamps. But also in cars, everything.” He rubs the table that contains the docking station. He puts his phone on the marked circle, a beep is emitted and his phone starts charging. “It is fully integrated into the table. The induction based technology produces about 5 watts of power, which is fine to charge a phone or smartwatch. But we are already working on a device that can deliver 15 watts, this allows you to charge tablets as well. If you look even further into the future it should be possible to deliver 60 to 100 watts of power. Then you can also recharge your notebooks or laptops.”

According Plasmans the possibilities are endless, he thinks that a lot of products can be equipped with wireless power in the future. “Kitchen stuff for example, like blenders and other devices. How great would it be if you would get rid of all those cables? Such a thing is used only for short periods, so you wouldn’t need a lot of power.”

Mainstream technology?
The technology has not yet been massively adapted. “That’s because not all phone manufacturers incorporate the technology that enables wireless charging. Apple, for example. We do have a solution though: a special case for your phone. This lets you tap power without a wire. But indeed, this is of course an additional barrier.”

Meanwhile ZENS and Ahrend have joined forces to focus on solutions for offices. Together they developed an app with which employees can sign in by simply putting their phone on the table. “When your is recognised by the table, you are logged in. Colleagues who are working somewhere else in the building, can see in the app where you are and can easily find you. This system is now in use in at Deloitte in Amsterdam. And this is actually just the beginning. Because we want to develop Smart Working Spaces that automatically adapt to the needs and wishes of each individual user. So if I put my phone on the table, the table matches my height for example.”

How it all began?
Plasmans started ZENS in 2011, together with his brother Johan. ZENS was the first company in Europe that came with a wireless charger. “We actually started with nothing, in Hapert. We have experienced such tremendous growth, and this makes me very proud”, he tells with a big smile. In the beginning, the brothers had to have the services of friends and especially the ‘granting’ factor. “We had no permanent staff yet. Everyone we asked to do something for us already had a full-time job. We had no money, so we couldn’t pay them anything. So we took them out to dinner and they got a discount on the products. But it was great to see that people believed in us, they wanted us to succeed. Now we are growing, we can do something in return.”

In return?
As an example Plasmans mentions the design table by Marijn van der Poll, that has incorporated ZENS technology. “We had never met but were quick to decide to work together, we could help each other. This is how it’s done: if a starting business from this region needs advice, my door is always open. That’s how it worked for us as well.  Here we have it always should have. The network that you build around you is the key to success. We’ve had lots of luck with this. Already in the beginning we said to each other that we could never do this on our own. So we arranged a sort of council of advisors, with people who could tell us what to do, and what not to. Someone from VDL advised us financially. The Director of Communication at VanBerlo advised us on sales matters and a manager at V&D escorted us with management and leadership. I am so grateful that these people helped us, it would have been a lot more difficult without them.”

A minimalistic phone case with maximum protection
The enterprising student easily beats professor
Improve the start-up ecosystem? 'Look beyond city limits'
Developing a quantum computer takes more than just money and…
'A university is not a patent machine'
Start-ups test their innovations during online edition of…