“Where can I find a bin?” This simple question gave Nicolas Lorenzo Zeoli the impetus to develop an app that could locate and show all trash cans while walking around Pisa – the city he lives in. Since the idea was already out there, he thought of creating a smart bin with multiple features – instead of just a simple app that could map out where bins are. He came up with hoooly! – which can sort garbage by itself. That’s the main feature of the smart bin designed by Ganiga, the company he started with his partner Gabriele Cavallaro. They design different kinds of trash cans both for street and house use.

Innovation Origins had a chat with Zeoli for this instalment of the start-up of the day series.

“The user can find the closest bin via their phone – even by asking their own phone’s voice-controlled assistant. What’s more, they can also find trash cans using the interactive map inside the mobile app. They can then log in to the bin, and throw their trash in that bin. We thought about a reward system, so the user gets points every time they toss their trash in a bin. Points work as a cashback system that users can use to spend in shops that are partnered with the system. The pro version of hoooly! – thanks to artificial intelligence – is capable of recognizing by itself what the user threw in, and sort it into the right compartment. Depending on their use, mechanisms to sort trash can be customized. Our trash can is made of recycled plastic and powers itself through solar panels. The model we recently unveiled has a 200 liter capacity. Sorting can’t be done perfectly yet, but it can definitely help in avoiding waste getting mixed up.”

How does the bin separate waste?

“It’s worth mentioning that we designed three versions of the bin for street use: basic, standard, and pro. The former doesn’t sort waste, it only notifies waste managers when it’s full. The standard version works with voice recognition. Via the app, the user says what is being thrown in and the system will know where to sort that water bottle or that paper box. The latter version is automated. It can detect rubbish in millions of positions – differentiating between the different materials – and sorts out trash to the right compartment.”

Food waste separation can be done with minor investment – that’s what a Lithuanian city is showing
Separating food waste is a relatively new practice in Lithuania. Dealing with it is one of the hardest tasks for municipalities – particularly in the early stages. Since 2019, as per the national waste management plan, cities with over 50,000 inhabitants were required to start implementing a separate collection system for this waste.

How did you end up creating a bin instead of a simple app?

“As soon as I wrote down how we wanted the app to work, I created an online form for people to fill in. By collecting this feedback, I understood that not only were they having trouble finding a bin, but they didn’t even know how to properly throw away their rubbish. That’s why I thought of designing a rubbish bin that could be linked to the app. Rubbish bins are often viewed negatively. With this in mind, we also took into account the need to make something attractive and user-friendly when we were designing hoooly!.”

Why did you decide to pursue this idea?

“I would say that with Ganiga, we are striving to make waste useful rather than useless. Throwing waste into a bin is something we do every day, so we thought of a way to make it attractive for users – because they get money back – while doing something more tangible for the planet. Italy is a tourist country, so our innovation can help keep cities cleaner and avoid piles of rubbish on street corners.”

What other advantages can your smart bin bring?

“It can help municipalities reduce the costs associated with emptying it. Because it can send a warning when it is full – and temporarily disappear from the map – street cleaners don’t necessarily have to pick it up each and every time. Cleaning plans can be optimised accordingly. Moreover, better waste sorting leads to a reduction in the quantities of residual waste. Municipalities pay more for nonrecyclable waste, so they charge their residents higher rates. In addition, more and more accurate statistics can be collected on how much – and what kind – of waste is produced in a particular city. For shops that join the network – by buying or leasing a bin – it is good advertising. The ultimate goal is to make the disposal of waste as easy as possible, for citizens as well as for shopkeepers.”

What about the bin for home use?

“That one focuses more on reducing food waste. For instance, it can notify the user if too much meat is being thrown away. It can also give a helping hand managing food expiry dates, by uploading a picture on the app.” 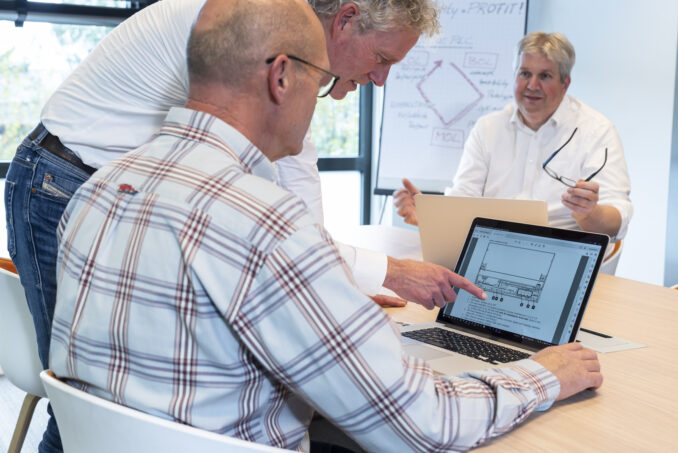 What other applications are you envisioning?

“We have lots of ideas. From bins for planes to bins for the beach, all sorts of things are springing to mind at the moment. Also ashtrays. As a team, we really can’t stand the fact that all those cigarette butts pollute the environment where we live every day. Moreover, one day we would like to be the ones who recycle waste, who make things from the materials we have collected.”