It is a student team, as well as an early start-up, but above all a community of people with the conviction that Artificial Intelligence (AI) will turn our entire life upside down: FruitPunch AI wants to give Eindhoven, the Netherlands and Europe a serious position alongside China and the US through cooperation and smart choices. “Yes, that may sound a bit ambitious”, admits FruitPunch AI founder Buster Franken directly. “But we think that this is feasible, especially because here, unlike elsewhere, we can make use of specific domain knowledge that is essential for the development of Artificial Intelligence. 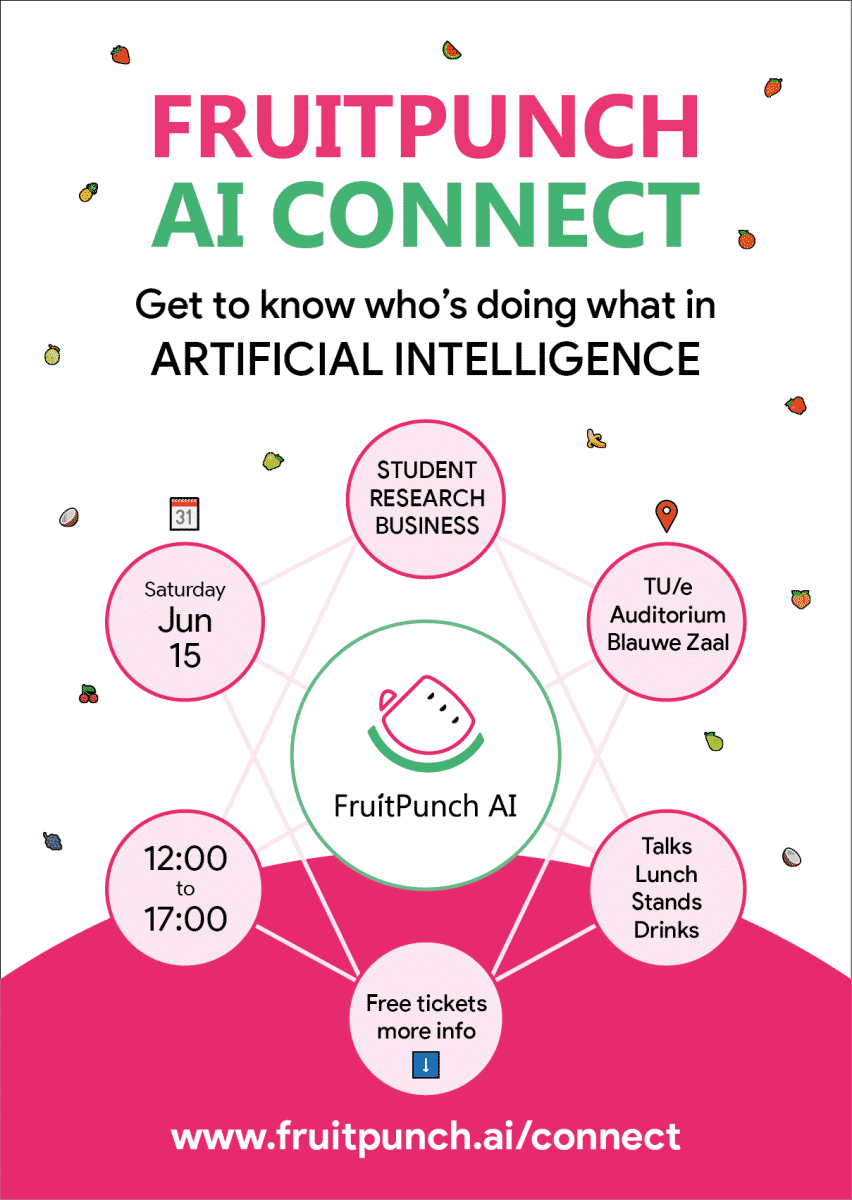 For Franken, it started to itch when, during his mechanical engineering studies (with an unusual specialisation in neuroscience), he noticed that in his spare time he wanted to have more than just a social drink with fellow students. He wanted more substance, more entrepreneurship as well. “Such a drink works fine for the connection with people, but why shouldn’t we add some education to it? What followed was the establishment of FruitPunch AI, a foundation that aims to spread the broad field of Artificial Intelligence, make its importance better known and help people with an interest in the profession get started. Franken: “We want to stimulate AI research and help to put it into practice. That’s why we focus on connecting people, doing research, applying AI technologies and training people in all aspects of the profession. AI is complex and overwhelming. But if you’re helped, it works better.”

“AI is complex and overwhelming. But if you are helped, it works better.”

Fruitpunch AI – now consisting of “6 full-timers, 6 part-timers and many dozens of some-timers” – does this in various ways. “We have our devdays, hackathons and from this week on every Tuesday evening a code-night in innovation Space. Anyone who wants it, whatever level you have, is welcome there. We provide guidance and – above all – the interconnection.” Laughing: “Just like those drinks, but with a lot more substance.”

The highlight of all their activities up to now will be the event organised by Franken and his colleagues for Saturday 15 June: FruitPunch AI Connect. Visitors will be immersed in the world of AI for an entire afternoon. With lectures, live AI demos, a panel debate and, yes, a drink with fruit punch for all attendees. “We already have some great people to look forward to: Jurriaan van Diggelen from TNO, for example, who discusses the question of how AI can best be integrated within large organisations. Or Anil Yaman, a researcher at the Eindhoven University of Technology, will explain how AI can learn from nature, for example in the creation of ‘swarm intelligence’. It’s unbelievable what all this makes possible: think of research in sewers by small balls that swim around like a swarm and constantly communicate with each other about where they are and what they do.”

There will also be a market at AI Connect where companies such as the Veldhoven-based Dimenco (3D TV without glasses) and Cyclone (an Eindhoven student team that makes autonomous drones) present themselves. “Two very special teams. In addition, there will be Code PS with their VR demo based on Crash simulations, TNO with a Pepper robot and a representative of TMC”. Franken also refers to the panel debate: “The special thing is that the topics discussed there are fully crowdsourced: with Slido, we see which themes are most appealing and we present them to the experts on stage.” And while you’re on the market, the FruitPunch merchandise isn’t far away either. “T-shirts, caps and even socks with our logo, hahaha, our creatives have gone all out on this!

Another part of AI Connect is an e-sports competition, with two concrete goals in mind. “Students learn to apply AI and also to do research on AI through that competition”, Franken explains. “The challenges that we give in the competition, we determine with the professors of the Eindhoven University of Technology. In this way, they are directly linked to the greatest challenges in the ‘cutting edge’ application of AI, such as care robots.”

Teams from the universities of Utrecht, Tilburg and Eindhoven participate in the first version of the competition.  Ultimately, the AI e-sports competition is for all universities. “It is a long-term competition that students work on all year round. Actually a kind of RoboCup for AI, with Eindhoven as the epicentre. International teams from all kinds of universities can participate.” Franken also sees this as part of his goal to not only help the Netherlands in the field of AI. “In this way, Europe can also compete with China and America.”

“I now work about 80 hours a week and that’s exactly what I want, so I think it will stay that way for years to come.”

Franken is convinced that all these activities, and certainly AI Connect, contribute to the higher goal. And that goal extends (much) further than just Eindhoven. In addition to the foundation, Buster Franken also has a commercial company form in mind. “This is still in development, but it is clear that we are thinking of a cooperative in which various entrepreneurs can join us. In this way, we can move on to a professional community for entrepreneurs, scientific researchers and developers. I do understand that we cannot scale up all the activities that we are currently developing here in Eindhoven to a European or global level all by ourselves. We cannot organise workshops and master classes everywhere on our own. We need help with that. The FruitPunch AI Foundation will remain bound to Eindhoven. But for our expansion strategy, we are now building the roadmap into that cooperative, with an important role for independent local chapters. FruitPunch AI will then be the online platform with a European competition, with tutorials and challenges, fully scalable. Then we will stimulate others to start similar activities everywhere.”

For Franken personally, this will eventually mean a step from the Eindhoven foundation to the (internationally operating) cooperative. But in the meantime, he is also working on a master’s degree, followed preferably next year by a new master’s in data science at the JADS in Den Bosch. “And of course, I will also continue to work full-time on FruitPunch, because this is all so incredibly interesting and promising, I just want to put all my energy into it. I now work about 80 hours a week and that’s exactly what I want, so I think it will stay that way for years to come.”

“We want to encourage and help AI research to put it into practice. That’s why we focus on connecting people”

Along the way, Franken hopes to get as many people as possible interested in AI, just as he has shown in Eindhoven recently. How does he manage that? Maybe it’s the professional acting career that Franken once had, or was it his three years of experience in education that gave him the skills to win people over? “Maybe, I don’t know exactly, of course. I strongly believe that people have, in addition to their primary basic needs, two major abstract needs: a sense of community and a strong purpose. This is certainly true for me and I try to show that in how we build the team, in good evaluations, in making everyone feel heard and by creating an open atmosphere. Besides a clear vision with the accompanying strategy that I regularly explain and discuss with the whole team. I always hope that this will have an effect on the people around me, but I will never know for sure.”

This is how innovation works: 'It's a matter of combining…
Students are developing a drone that can fly forever
Flexible, durable, strong: 3D printing with concrete…
Huge Tour de France success for team Jumbo-Visma is also…
SensUs develops detection method for deadly inflammatory…
TU/e Innovation Space winner of the Triple E Award for…
Manage Cookie Consent
We use cookies to optimize our website and our service. Help us to make our site better by accepting all cookies.
Manage options Manage services Manage vendors Read more about these purposes
View preferences
{title} {title} {title}