It doesn’t seem to stop anywhere: now it’s the fourth house in my immediate vicinity that has been sold in the past six months. At first, I thought it might have been my fault that one after the other leaves, but I don’t make that much noise anyway.

‘By age’, ‘going to something else’, divorce: all the arguments can be heard. But there is more to it than that. Because perhaps the most surprising thing is that all these houses were sold within three to four weeks after the ‘for sale’ sign appeared in the front yard.

It looks like an epidemic, and many are infected with it 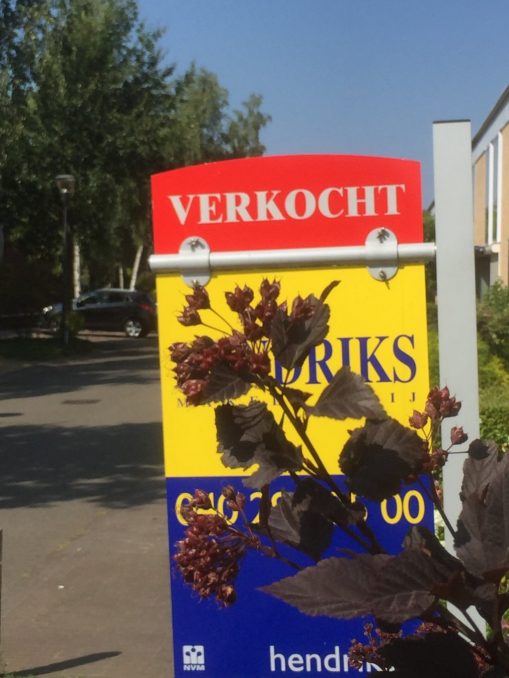 You’re crazy if you don’t seize your chance now, you’re a thief of your own wallet – and I hear a lot of similar occasional arguments on the streets. Potential sellers will see euro signs in their eyes and are looking forward in advance to their leading role in possible negotiations.

Asked prices are offered, or even outbid.

Visit now and make an offer within 24 hours, it seems the only way to success.

The economic miracle of Brainport is manifesting itself in many ways. Our region is flooded with expats and they often want to live here as well. And they pay a lot for the most comfortable houses.

Not everyone wholeheartedly welcomes this growth.

Streets are becoming very international: all those highly educated Asian technicians and ICT-people, many Indian engineers. South American researchers and their families, but also mathematicians from Egypt and Syria: they are rapidly settling down in the Kempen, in Eindhoven, in my Meerhoven neighbourhood. No wonder some people call it “Wokhoven” and “Expathoven” instead.

And others feel like they’re living in Little Italy, Chinatown or Manhattan.

In our neighbourhood supermarkets we hear way too much English, as one of my neighbours assured me with great certainty. That is why we are going to move, and of course, coincidentally or not, the housing market is also picking up…

This motivation surprises me and also makes me somewhat worried. Would Minister Blok’s disbelief, which became public last week, in the future of regions where ethnic groups live together peacefully, come very close to my front door in a surreptitious way?
I don’t want to believe it…

At one of the primary schools in the area, the number of nationalities rose to more than thirty within four years! English lessons are taught right from the first group. For example, a boy coming from Panama can start chatting with a Brabant Russian friend in no time at all.

We already knew that the world is a global village. The fact that a suburb along the Rundgraaf is developing into a global world, would have surprised the 19th-century landlords of Zilst, Oers and Strijp.

It is a pity that some of the Dutch farmers, citizens, and outsiders in my neighbourhood will no longer be witnesses to the melting pot that is being formed in our neighbourhood.
Are they fleeing from a new reality in our region?

Urbanisation is of all times. The Drente (!) Village in Eindhoven dates from the 1920’s. And yet, we never heard: too many ‘Drents‘ in the local supermarket…

Pieter Hendrikse gives his views “From the Hovenring” in a weekly column on our Dutch platform. Occasionally, they are translated in English.