The European Union will invest no less than €315 billion Euros to support strategic investments in key areas such as infrastructure, education, research and innovation in the next two years. Ewit Roos, managing director of the Eindhoven based PhotonDelta, asks for a fair share out of this budget for the development of the photonics sector. To scale fast enough to keep up with Chinese and US competition, billions are needed.

The goal is to create strategic innovation hubs all across Europe. “We think that the 200 Photonics companies that lie inside our PhotonDelta deserve much more attention.” explains Roos. “Which is why were are actively engaging in building powerful informal and formal networks across the globe to make this happen.”

In his keynote presentation at the opening of the Institute for Integrated Photonics, today in Veldhoven, Ewit Roos called for much more money and attention. Why? “Because Integrated Photonics is the engine driving expansion of the total optical technology market. It drives next generation telecommunications (5G), data-communication, medical diagnostics, sensors and security, automotive, avionics – all the areas in which PhotonDelta members have proven expertise. And Photonics will clearly have an amplifying effect on related high-tech and supply companies too.” 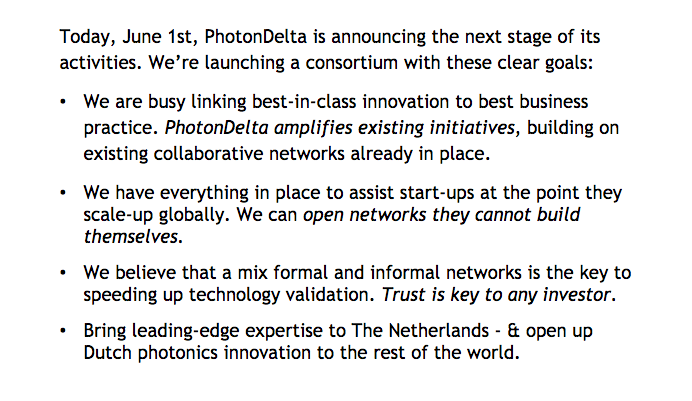 That’s why  PhotonDelta is building a European-wide “end-to-end ecosystem” of researchers, chip designers, foundries and software developers rising up to meet these challenges. “It’s also a great example of a trusted, collaborative network.”

The main reason people are talking about photonics now is that the global demand for fast broadband capacity is growing exponentially, by about 70% a year. That means 10.6 billion mobile devices in the world by 2020. And in less than four years time, the number of Internet of Things connected devices will be at least 38.5 billion, that’s three times as many as the current figure of around 14 billion today.

This all adds up to the simple conclusion that using photonic-chips, that work with light rather than electrons, is key to taking us into terabit-per-second era, dramatically increasing both data capacity and transmission speeds, Roos says.

So, Photonics is simultaneously reducing the Internet’s global carbon footprint and the overall cost per bit. “And photonics is also key to making new tools for measuring things we can’t yet measure. With those tools, we can answer important new questions. And create new business and investment opportunities in the fields of medicine, environment and energy.”

Europe is still ahead, Roos says. “Europe has a two-year lead over other continents by having a vibrant ecosystem already in place, and much of this is in the Brainport Eindhoven region. PhotonDelta is going to amplify existing initiatives and kick-start new ones.”

“Europe is still ahead”

For members of the PhotonDelta cooperative, which is being unveiled this week, there will be early access to IP before that intellectual property is filed. Roos: “Such a thing can only happen within a trusted informal network, whose members share what they are working on and where you get a front-row seat in the theatre of ideas. This helps companies and researchers to work in parallel, sharing cleanroom facilities and equipment to reduce development costs.”

Photondelta is a cooperative designed to operate on behalf of members, reaching goals which they cannot achieve on their own. “We’re there to protect their knowledge, and protect the IP. And we can create attention from global investors such as venture capital.”

Step-by-step to a sustainable night out