Incentives to promote e-mobility are available in many European countries. In most cases, it is the tax reductions and subsidies on purchases that should make it easier for citizens to make the switch to e-cars. When the Austrian federal government recently exempted e-cars from the 100 kph speed limit on routes marked out as ‘air protection zones‘,  it was unique across Europe.

In Austria, sections of highways and expressways with a total length of 440 kilometers are listed as air protection zones. They are subject to a speed limit of 100 kph. The slower diesel and petrol-driven cars drive, the less CO2 they emit. This is regulated in the Immissionschutzgesetz-Luft act (IG-L, legislation designed to protect the air from harmful traffic emissions).

E-cars drive for the most part emission-free. With the rising numbers of e-cars on the road, it was therefore only a matter of time before the speed limit was called into question. The debate was initiated by Tyrolean lawyer Christian Schöffthaler. In 2014, he deliberately exceeded the speed limit in order to be able to lodge a complaint with the regional administrative court. The court subsequently dismissed the complaint. Their argument: Different speed limits for passenger cars can interrupt the flow of traffic and thereby jeopardize road safety.

Schöffthaler’s lawsuit was soon followed by others. But the courts remained difficult. This was different at the Bundesministerium für Nachhaltigkeit und Tourismus (the BMNT, Federal Ministry of Sustainability and Tourism). The then Minister Elisabeth Köstinger of the Austrian People’s Party saw the suspension of the speed limit for e-cars as an incentive. She brought the new IG-L regulation into force in November 2018. The actual implementation date did not take place until 1 July 2019, when the traffic signs were placed on the relevant sections of the routes. 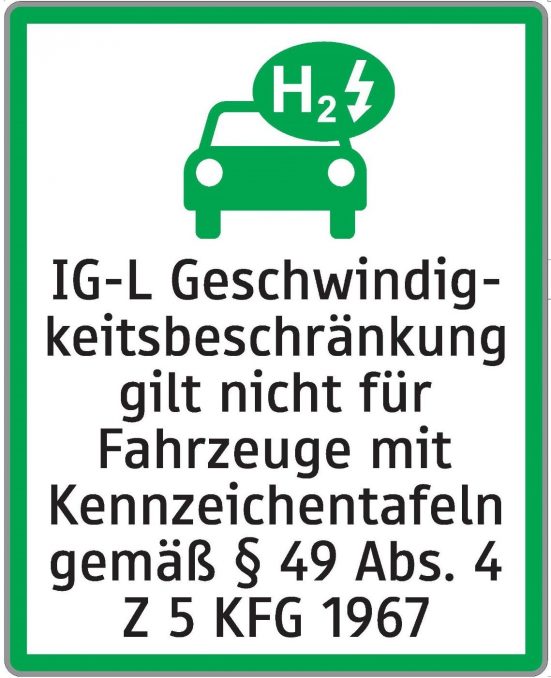 The Österreichische Autofahrer Club (ÖAMTC, the Austrian Automobile Club) welcomed the new IG-L regulation and agreed with the argument made by Schöffthal and the Minister. According to ÖAMTC, the Lufthundert is generally unpopular among Austrian motorists. In an online survey, half of the respondents rejected the speed limit. Only one in five said that it was okay.

A clear no to the scrapping of the Lufthundert for e-car drivers came from the Verkehrsclub Österreich (VCÖ, another Austrian motorist’s association).  It advocates an ecologically compatible, economically efficient and socially just transport system. The experts of the VCÖ pointed out the negative side effects and called for more effective measures in order to speed up the energy system transformation. According to VCÖ, varying speeds will hamper the flow of traffic, increase the risk of accidents and complicate the work of speed controllers and traffic police. In addition, electric cars are not completely environmentally friendly and would trigger fine particles due to wear on brakes and tires. And according to the latest emissions report from the Federal Environment Agency, 58 % of PM10 emissions of fine particles are caused by dust that is stirred up and by the wear and tear on brakes and tires. The VCÖ finds this problematic. As varying speeds in the air protection zones lead to more braking maneuvers being made and consequently to more wear and tear on brakes and tires. [This falls under non-exhaust traffic related emissions, as detailed in the 2014 Joint Research Centre report from the European Commission, ed.]

The VCÖ experts also doubt whether the exemption for Luchthondert motorists will lead to citizens switching to e-cars one hundred times sooner. They attribute the low percentage of e-cars in Austria mainly to a lack of supply from the car industry. If it is up to the VCÖ, then the government should reduce CO2 limits and increase the e-car quota for car manufacturers. This would boost the number of e-cars on the market.

An additional problem with regard to international traffic is the fact that the Lufthundert exemption only applies to vehicles with a license plate that has green lettering. Even before the law came into force, the German media were of the opinion that this discriminates against foreign motorists.