Albert Einstein’s General relativity theory is a book from 1915 with seven seals for the vast majority of “normal mortals”. In a nutshell, the special theory of relativity developed earlier states that everything is “relative”, i.e. that time does not always pass equally quickly and, therefore, a minute can sometimes last longer and sometimes shorter. Just like time, lengths are not always the same and a meter can be sometimes longer and sometimes shorter.

The General Theory of Relativity (ART) goes one step further. Here comes into play gravity and curvature of space and time. Thus it depends on the speed with which we move, how fast time passes or how long a meter is, and the faster we move, the slower time passes. This part of the theory has already been scientifically proven. In addition, the further you are from Earth, the more time and length change.

Scientists have been working for decades on researching this theory of relativity and its correctness, and after 26 years of observation with the telescopes of the ESO in Chile, they were now able to “put a catch” on it. Observations with ESO’s Very Large Telescope were the first to show the effects predicted by Einstein’s General Theory of Relativity on the motion of a star traversing the extreme gravitational field near the supermassive black hole in the middle of the Milky Way. (also watch the video below this article)

This supermassive black hole is 26,000 light-years from Earth, at the centre of the Milky Way, and the closest black hole to Earth. Its mass is four million times larger than that of the Sun and it is surrounded by a small group of stars orbiting it at high speed.

“This extreme environment – the strongest gravitational field in our galaxy – makes it the perfect place to explore gravitational physics and test Einstein’s general theory of relativity,” ESO says. “At the nearest point, the star was less than 20 billion kilometres from the black hole and was moving at a speed of over 25 million kilometres per hour – almost three per cent of the speed of light.

New infrared observations of the GRAVITY, SINFONI and NACO instruments at ESO’s Very Large Telescope (VLT) enabled astronomers to follow one of these stars, called S2, as it passed through the black hole in May 2018. The team compared the position and velocity measurements of GRAVITY and SINFONI as well as earlier observations of S2 with other instruments with the predictions of Newtonian gravity, general relativity and other gravitational theories. 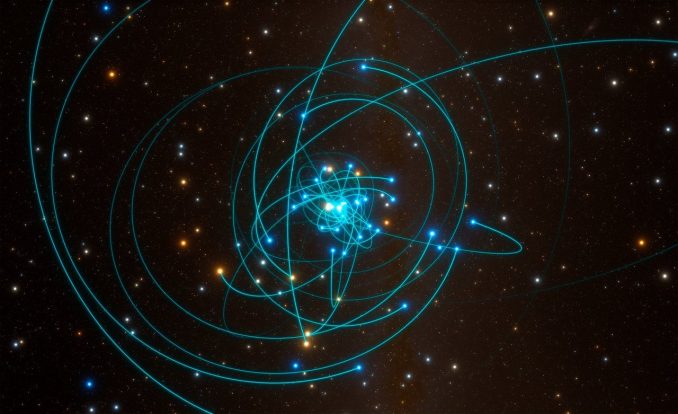 The new results do not fit Newton’s predictions, but they do fit perfectly with the predictions of general relativity. “There is no gravitational redshift in Newton’s universe. It’s a relativistic effect,” explains Stefan Gillesen of Max-Planck Institute for Extraterrestrial Physics.

However, the new measurements clearly show an effect called gravitational redshift. “Light that moves out of a gravitational field is redshifted in the ART. This applies to light that we send up from the Earth as well as to the light that leaves a star – so the body’s gravity affects the colour of the light that you see far away, the wavelength is increased,” explains Gillesen. 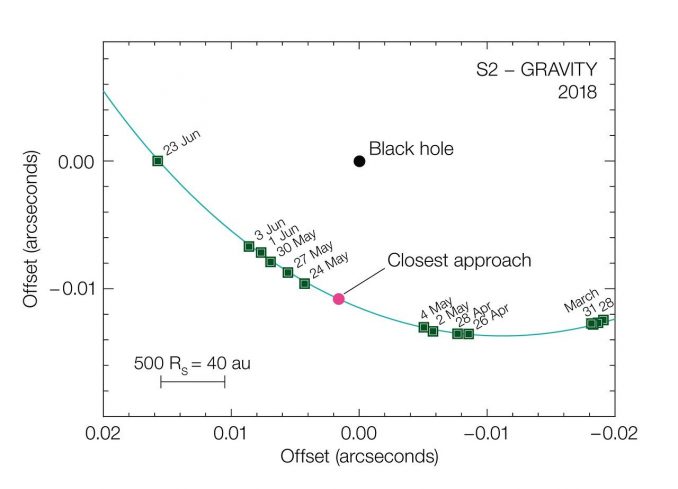 “One can actually never prove that something is true – because perhaps someone will find an inconsistency in the future.”

This change in the wavelength of light from S2 is exactly the same as that predicted by Einstein’s General Theory of Relativity, but Gillesen emphasizes that even these findings cannot yet be described as final proof of the correctness of the ART.

“Science works through tests. One can actually never prove that something is true – because perhaps someone will find an inconsistency in the future. But you can test, i.e. check whether the theory agrees with the observations. If yes, one can set a hook and turn to a next test. If no, then you might be able to reject the theory as false,” he says. “So we were able to set another hook here: “The ART was also right in this case. It was the first time that the redshift was detected directly in such a heavy body (4 million solar masses) and such a strong gravitational field.”

Françoise Delplancke, head of the Systems Engineering department at ESO, explains the significance of the observations: “Here in the solar system, we can only test the laws of physics under certain circumstances. That is why it is very important in astronomy to check whether these laws are still valid when the gravitational fields are much stronger.”

Further observations should soon show another relativistic effect – a small rotation of the stellar orbit called Schwarzschild precession – when S2 moves away from the black hole, ESO believes.

But anyone who now believes that the new measurements also give evidence that time travel is possible if one is only fast enough, as Einstein already described in 1905 in his special theory of relativity, will be disappointed. “No, this cannot be interpreted as an indication of time travel. The effect with the speed, which you address, is one of the special relativity theory”, says Gillesen. “But this theory is already so constructed that you can never get information from the future, or vice versa, that you can manipulate things in the past. Such time travel is impossible.”

“What one reads from time to time as speculation is time travel in the context of the general RT. One could imagine wormholes connecting space-time regions in the universe. This is probably possible in the equations, but there is no indication anywhere that you actually have such objects in the universe,” he continues. “And it would also violate our basic understanding that the cause must precede the effect. Otherwise, one would fall into the logical trap of being able to kill one’s parents before one is born. Then one would not be born at all. But then you wouldn’t be able to travel back in time, and the parents wouldn’t be killed. But then, again, you would be born …”

The measurements were carried out by an international team led by Reinhard Genzel from the Max Planck Institute for Extraterrestrial Physics (MPE) in Garching near Munich together with colleagues from all over the world – at the Observatoire de Paris-PSL, the Université Grenoble Alpes, the CNRS, The observations, which were conducted at the Max Planck Institute for Astronomy (MPIA), the University of Cologne, the Portuguese CENTRA – Centro de Astroﬁsica e Gravitação and the ESO, are the culmination of a 26-year series of increasingly precise observations of the Milky Way centre with ESO instruments.

Also interesting: Hubble finds further clues to a moon outside the solar system

The Space Week shows the social importance of space for…
Searching for cracks in relativity theory with the Einstein…
Young talent, Big Science and hundreds of high-tech…
Solar energy from space possible within 20 years, according…
Everything that can affect a plant
Govert Schilling sheds light on one of the greatest…
Manage Cookie Consent
We use cookies to optimize our website and our service. Help us to make our site better by accepting all cookies.
Manage options Manage services Manage vendors Read more about these purposes
View preferences
{title} {title} {title}