Data scientists from Eindhoven, The Netherlands, have succeeded in predicting the number of new coronavirus infections and deaths that will occur within the next few days. They do this by applying population growth models to worldwide data on COVID-19.

For the four countries with the highest number of infections – China, South Korea, Iran and Italy – an accurate prediction can be made for one to three days into the future. Moreover, they can already estimate the maximum number of infections in South Korea and Iran. This will soon also be possible for countries such as The Netherlands and the United States. An update of the latest predictions will be published in the next few day on the TU/e website. 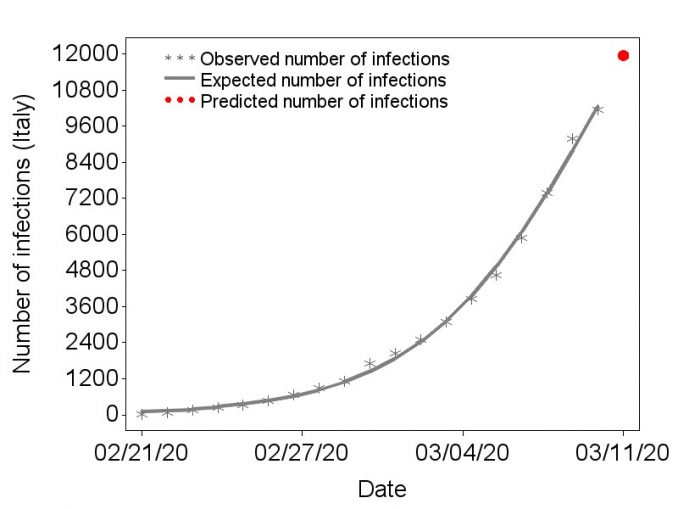 We are data scientists, we had to do something with this.

“Researchers all over the world are busy analyzing the rise in corona infections. Although it is pretty difficult to make accurate predictions,” says Edwin van den Heuvel. He’s Professor of Statistics at Eindhoven University of Technology. Together with two colleagues, he has unleashed his knowledge of statistics and growth curves onto the COVID-19 data in order to produce these highly sought-after calculations. “We are data scientists, we had to do something with this.”

Listen to this podcast about the same topic

It may seem a minor thing to follow through with the line of infections. But according to Van den Heuvel, it really does entail a lot of work. “The question is always when will the rise in infections level off? When will they peak?”

Also for The Netherlands

They are now able to estimate the number of new virus infections affecting China, South Korea and Iran within the next three days, with an accuracy rate of over 81%. At the moment, Italy has been able to do this for one day ahead. With more data, it would be possible to look further into the future. Van den Heuvel expects that within a few days he will also have enough reliable data for countries such as the United States and The Netherlands in order to be able to do this.

“We will keep on improving our model, so that we can predict farther ahead and more accurately,” van den Heuvel says. They are also going to look at the effect of measures and the demographic structure in China. “This way, we hope to be able to predict more quickly when a peak will be reached. So that we know how many people in total will become infected or die as a result of the virus,” says van den Heuvel. “We also hope to gain insight into the factors that influence the number of infections and deaths.”

Van den Heuvel based his work on the famed logistic system devised by Belgian mathematician Pierre Francois Verhulst circa 1845. This system describes how a population grows over time, and has an S-shape: in the beginning, the population grows slowly. This is followed by an ever-increasing growth rate, which then levels off at its peak.

They first applied this population model to the data from China. “The total number of infections for each province in China turned out to follow that logistic growth very precisely,” van den Heuvel explains. Using the Chinese data, they were able to calibrate their prediction model in order to correct underestimates for the maximum number of new infections and deaths in other countries. “Those predictions proved to be correct for Iran, Italy and South Korea.”

Read more of the stories in our dossier on coronavirus innovation here.