The Österreichische Wasserstraßen-Gesellschaft mbH viadonau company has the task of maintaining around 500 km of riverside cycle paths. About half of these are marked as Danube cycle paths. In the Vienna-Kuchelau area alone, more than 500,000 cyclists cycle every year – and the number is growing. This is because the paths have been connected to the European cycle route network Eurovelo – and tourists are increasingly combining their boat trips with short cycling trips. To make it possible for inexperienced cyclists to use the paths safely, the path maintainers are required to constantly monitor the paths. Irregularities caused by damage must be detected quickly to protect the users. A total of 320 km of the riverside paths are asphalted, and especially in the case of asphalt paths, frequent condition assessment also makes sense for economic reasons. This is because early repair can prevent damage from progressing and extend the life of the pavement.

Damage to asphalt cycle paths can have various causes, such as varying use, weather influences and trees growing at the side of the path. The latter cause root bulges that break up the asphalt layer. “This has an unfavorable effect on the life of asphalt because water then penetrates the substructure and remains there. In winter, ice lenses inevitably form, which have a larger volume than water and break up the asphalt even more. This is how progressive damage develops,” explains DI Roland Spielhofer from the Center for Low-Emission Transport at the AIT Austrian Institute of Technology.

Until 2020, the condition assessment of the cycle paths along the banks of the Danube was done visually. This meant using a vehicle equipped with software and a specially converted basket as a “lookout” for the staff. But to achieve greater precision, the path maintenance person wanted to digitize the process in 2020 and started a corresponding pilot test. The results were convincing and in 2021 a suitable project and research partner for the condition assessment of the entire cycle path network was sought via a Europe-wide tender. The contract was awarded to the Center for Low-Emission Transport at the AIT Austrian Institute of Technology. Spielhofer is in charge of the project and works with a team that has been involved in the condition assessment of entire road networks for motorized private transport for quite some time. 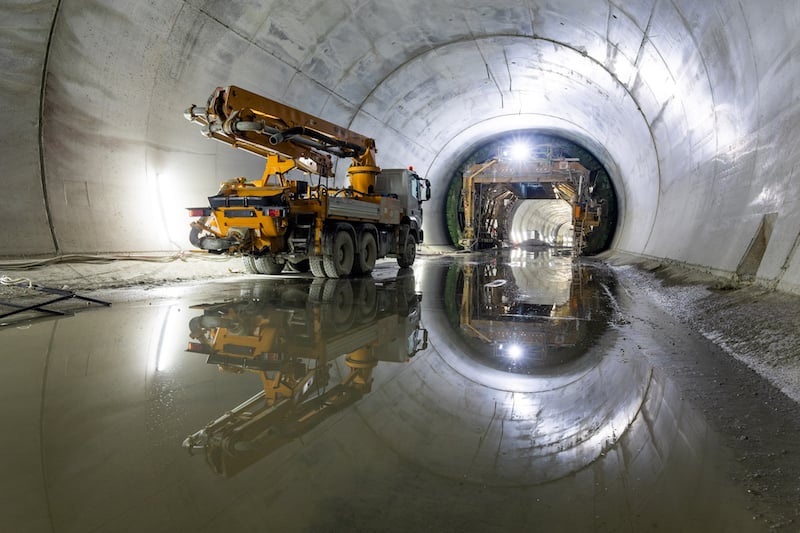 Tunnel construction as a climate-friendly source of energy – Innovation Origins
The Brenner Base Tunnel is to take over the energy supply of entire city districts. The source of energy is geothermal energy contained in the tunnel water.

When tunnels are driven through mountains, it’s not a question of dealing with the water table but with the mountain water table.

Nevertheless, new methods had to be developed for assessing the condition of cycle paths. When assessing the condition of roads, one concentrates on the parameters in the right-hand lane. A cycle path, however, requires an area-wide condition assessment. “The cyclist is even more dependent on a good surface conditions than the driver of a motor vehicle, because the bicycle does not have proper cushioning. As a result, unevenness such as pavement edges, root bulges, etc., can have a particularly strong impact,” explains Spielhofer.

Spielhofer and his colleagues developed a roadlab in the form of a minibus equipped with laser scanning and camera equipment. This makes it possible to record the entire viadonau road network as high-precision scans and high-resolution 360-degree images. The monitoring focuses on the aforementioned road damage, but also on road markings and traffic signs as well as the clearance gauge. The latter makes it possible to determine whether obstacles such as branches protrude into the path from the side or from above and could endanger cyclists.

The laser scanner generates a very precise and detailed 3D resolution of the roadway. From this, characteristic values can be calculated that represent the evenness. From the user’s point of view, evenness is an essential factor for safety and driving comfort. Taking into account the usage needs of vulnerable road users such as cyclists is specific to the new system, says Spielhofer.

From a maintenance point of view, meanwhile, it is important to record typical surface damage such as potholes, cracks, detachments and chipping. This enables the maximizing of the life cycle of the path for as long as possible and the optimal usage of the limited budget for maintenance.

The collected data is evaluated using artificial intelligence developed at the AIT that is then migrated to a separate data management system that allows for the geographical management of these cycle paths. It allows both an eye for detail – for example, the analysis of individual, precisely located images – and an eye for the whole, for example, with regard to the distribution of different degrees of condition along a larger stretch of road.

In the management system, you can form construction sections. If you want to see their quality, for example, you can color these sections on a color scale from “green = everything OK” to “red = very bad.” The system then combines these small individual evaluations into longer sections and makes suggestions for sections that should be considered for renovation because their condition value falls below a certain threshold.

viadonau has access to the system via a web interface, can look at these proposed measures and can draw up a construction program that it will implement over the year. At the end of the year, the renovation carried out is then entered into the system and updated. viadonau can also look at the condition of the network in connection with the maintenance budget and plan ahead for years. Various scenarios can be simulated. For example, by specifying that the cycle path network should have a certain average condition, or that no area should fall below a certain threshold.

Photo: At the rear of the Roadlab is the laser scanner, which scans the entire surface of the cycle path and produces a 3D model in relief. At the front is a 360-degree camera with which the surroundings can be recorded and displayed as a digital twin. The latter is used to check the clearance profile and to detect possible obstacles that protrude into the cycle path from the side or from above.

Vienna.dealroom.co helps Viennese Start-ups and Investors…
Improving urban cycling mobility
Austria plans future-oriented infrastructure with Recovery…
Recycling is just one strategy for reducing the mountain of…
Improving the quality of life in cities with green roofs
Does artificial intelligence in medicine have to be more…