Fervent cycling enthusiast and professor at the TU/e and the KU Leuven, Bert Blocken, is fascinated by the wind and what that and air pressure do to the riders. After the spectacular way in which Froome descended on the eighth stage of the Tour de France in 2016, Blocken investigated the best aerodynamic descent. It wasn’t the position on the bike that made Froome win. Tuesday is the first mountain stage of the 105th edition of the Tour de France, interesting to know what the most aerodynamic position is.

Once Blocken himself cycled an average of 10,000 kilometers a year. He confesses that he no longer has time to do so. His researches, including those into his wind tunnel, took most of his time. Sitting on the couch on a weekday evening it all started, in 2010. “What is the effect of the second rider on the first one? This had not been researched before and Blocken showed that there was actually an effect. Later, research into the influence of a car in front of or behind a rider, and motorcyclist in front of, behind or beside a rider, and recently the best position in the peloton, followed.

“I have never been so insulted as I was during this study”, Blocken says about the study into the most aerodynamic descent position. Together with the TU/e, KU Leuven and ANSYS International he initially studied four different attitudes. “It was said and written that this research was nonsense because it wasn’t possible that Team Sky wouldn’t have tested all of that on its own. In the end, we extended our research to fifteen different descents, also because we wanted to be right.

Froome’s position was quite peculiar, Blocken thinks: sitting far in front of the top tube so that he could still pedal. With 13 seconds he won the stage before riders like Nairo Quintana, Adam Yates, Bauke Mollema. “Many people said: ‘what fantastic’ and thought this was a superior dynamic position. It was fantastic, but not really aerodynamical.” Four positions were tested in the Liège wind tunnel and computer simulations were carried out at the TU/e. One of his Ph.D. students served as a model for the scans. In sessions of 10 minutes he was scanned in the position of Froome, “not the most comfortable position”, and the “not easy either” position of Marco Pantani; sitting at the very back of the saddle. Also sitting on the saddle with the back horizontal and with the backdown and the head falling in the extension of the fuselage were tested. The models in the scale of one in four were placed in the wind tunnel and tested at a speed of 216 km/h, which in reality corresponds to 54 km/h.

What turned out was that the position of Pantani was the most aerodynamic. “Almost nobody does that anymore.” Froome’s position was the third best. Because there was a lot of criticism towards the researchers, they expanded the research. “We looked at several positions in the tour because there are a lot of different ways”. Freely horizontal positions, pointing downwards, hands on the handlebars, and those of Froome sitting on the top tube, a position that Contador also used and with which “he lost Paris – Nice” (ed. 2017) and a position of someone who “understood better”, Primož Roglič.

“This is also the research where I have had most often the same email: “Shouldn’t you even study this? It continues to appeal to the imagination.” The slowest and fastest descents in a straight descent were examined, on a track where there are no crazy maneuvers and no hairpin bends and the riders do not have to pedal. “If you ask me, riders like Peter Sagan and Primož Roglič have understood the descent best.” Also sitting on the top tube but much more backward than Froome.

After this study, Blocken was right. “That was fun after all those insults. Also that the world champion (ed. Sagan) in a public post on Facebook writes that it was a good investigation.” 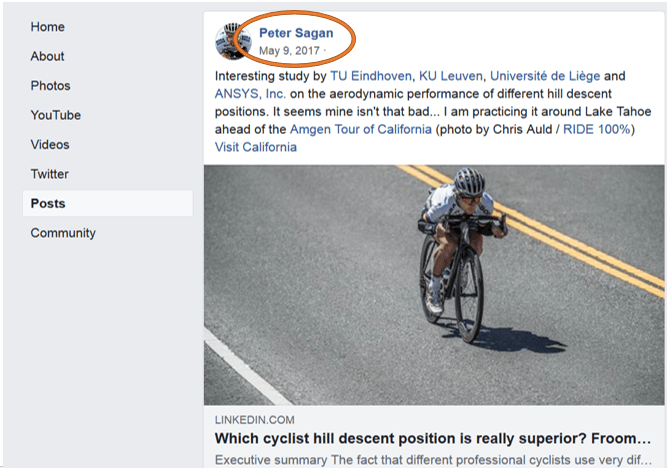 Why did Froome win the stage in 2016? According to Blocken, this was due to hesitation on the part of the other riders at Froome’s “quick escape” on top of the Col de Peyersourde and even less aerodynamic position on a large part of the descent. Froome has now changed his descent position, Blocken says. “In the descent of the 19th stage during the Giro d’Italia, he fell into the position we recommended.” Froome won the Giro d’Italia this year and took up the pink jersey in that stage. 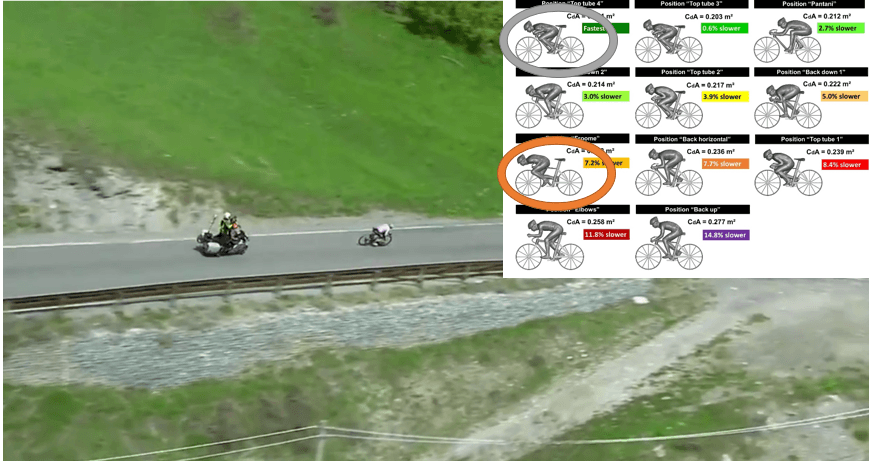 One might wonder whether this research really makes sense, it concerns very small percentages and in reality, you are dependent on the weather conditions and what happens in the course. Blocken: “I think all the bits can help.” Especially in the two prestigious team time trials in the Tour de France and the World Cup of 2013 you can see that beautifully, Blocken says. “At both times, the difference between the numbers one and two in both matches was less than a second.”

Descending is all about taking risks. And for the non-professionals among us, we say: don’t try this at home.

Source: article Block “Fantastic downhill from Chris Froome; but was it worth it? The Scientific Answer” & a reading at the High Tech Crit seminar on 11 June 2018

TU Eindhoven research on air purification in schools to kick…
Fe+male Tech Heroes at long last live again in Eindhoven
Move to live: how Move to Be wants to get the country…
'Quit your job for one day a week'
Dutch Technology Festival brings top of Gaming & Esports to…
'I hear too often that women have to be harder, more…