Mammography is the method of routine breast cancer screening that has been a golden standard for a long time. It has numerous benefits but also its harms and its limitations, so the researchers all over the world keep looking for the ways of improving the existing method (like the software that improves the detection of cancer in mammograms) and for the alternative breast cancer screening methods – for example, the method of echography with microbubbles that has been proposed by researchers of TU Eindhoven.

One of the alternatives to mammography is currently being worked on in Brightlands Campus Greenport in Venlo. This method of breast cancer diagnostics developed by the company Mito Medical Products is called Delseni. The owner of the company, Ton Kleeven, describes Delseni as a measuring instrument: “The sensors measure vascularity (blood-vessel formation) in the breast tissue, which takes ± 10 seconds. The data is processed in an algorithm and the results are displayed on the image. Parts of the breast that meet the criteria indicating a disorder that may lead to breast cancer are clearly indicated.”

Mammography is not the most pleasant method of screening – in fact, it can be painful. “That is why many women avoid this investigation,” tells us Ton Kleeven. Mito Medical Products focuses on the development of the method that does not cause pain – moreover, as Kleeven characterizes it, it is a more women-friendly method in comparison to mammography in terms of the procedure and its limitations: Delseni screening does not use X-rays that might be harmful, it is suitable for pregnant women, for the women with breast implants and also for the women who are younger than 50 years old (fifty is the lowest age limit for mammography screening in the Netherlands). 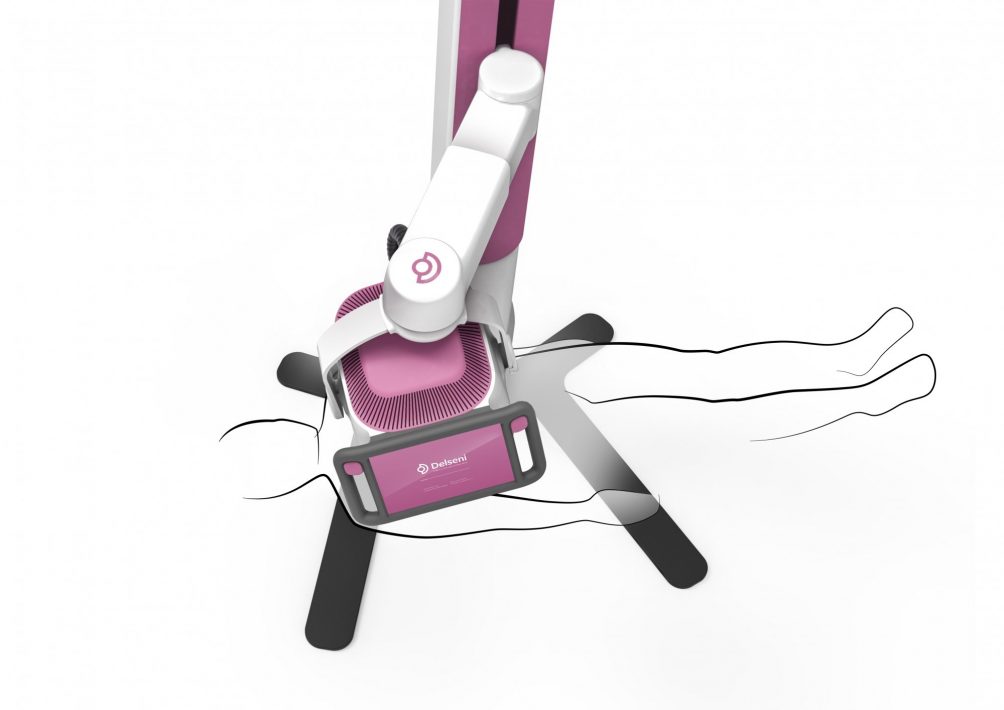 Women face the risk of breast cancer at all ages. The age limit for the patients undergoing mammography screening is set to 50 years for two main reasons: on the one hand, due to the risks-benefits ratio (for the women under the age of 50 the risk coming from the exposure to X-rays is considered to be outweighing the benefits); on the other hand, women under 50 quite frequently have dense breast tissue and mammography does not have the sensitivity allowing it to “see” through the increased density, which results in numerous false positives. “In addition to these limitations, mammography sees all the small calcifications (calcium deposits) in the breast tissue that usually appear at the age of 50 and older as cancerous and women have to go for a more extensive screening. However, 92-94% of these women undergoing this extra screening turn out to have no cancer,” says Ton Kleeven. “Delseni screening method provides 95-97% of accuracy – it means almost no false positives. The specificity of Delseni (the accuracy of the “no cancer” result) is also about 95%.”

“My goal was to make the screening for women younger than 50 years old available”, says the owner of Delseni. “There is no breast cancer screening for their age group and usually women go to the doctor when they begin to feel that something is wrong. But at this stage, the disease is already very hard to treat. I have a technical background, so I found out that with the special sensors I can detect the breast tumours by the increased vascularity around them. When hypervascularity is detected, it is not possible to tell if it is cancerous or not, but it is possible to say that something wrong is happening in the breast tissue, which is enough for the first screening.” As Ton Kleeven says, Delseni is designed particularly for the primary screening – for example, it can be used at the office of a family doctor: “The device produces the result automatically and instantaneously, so no specially trained personnel is required to read the images.”

Delseni will undergo two different kinds of clinical studies in 2019. “We are preparing the studies of our device in Antwerp University Hospital (UZA) involving more than 500 women of several ages. The second type of studies will be done in Radboud University Nijmegen – it will be focused on the quality of the image and on the further development of Delseni. We want to have more clinical evidence before we go to the market.”

The screening device developed by Mito Medical Products is likely to appear on the market at the end of 2019-beginning of 2020. Kleeven says that at first the devices will be available in the Netherlands and then in other countries of the EU. “The approach to the breast cancer screening varies from country to country”, adds the owner of Mito Medical Products. “In the Dutch healthcare system, it is normal to examine only the absence or presence of the tumours in the breast, whereas in other countries like Germany or Belgium medical specialists look at the woman on the whole. That is why I think in these countries the acceptance of our breast screening device would be higher.”