In the surroundings of bicycleafe Velosoof on the NRE grounds, you can find the latest developments in cycling during DDW. From mass production to handmade, from electric to old-fashioned peddle-your-own-way and from race sample to seniors bike. It’s all there during the Dutch Bike Expo, composed by yksi design.

“We started this exhibition in 2008″, says Leonne Cuppen, curator of the exhibition. It was really an exhibition on the move, especially for Dutch embassies abroad. We have been from Tunis to Bratislava, really everywhere. As Dutch people we are known abroad as real cyclists, that’s a cliché, but okay. We wanted to show that cycling is much more than just a means of transport with two wheels.”

The technology is developing at such a rapid pace that we actually have to hold a new exhibition every six months. Everything we see now can have a successor in a few months’ time.Leonne Cuppen, Yksi ontwerp

Since its inception, the exhibition has been constantly updated with the latest developments. Because, according to Cuppen, things are going incredibly fast. Who could have predicted a few years ago that pedelecs would be used in so many different ways? The technology is developing at such a rapid pace that we actually have to hold a new exhibition every six months. Everything we see now can has a successor in a few months’ time. 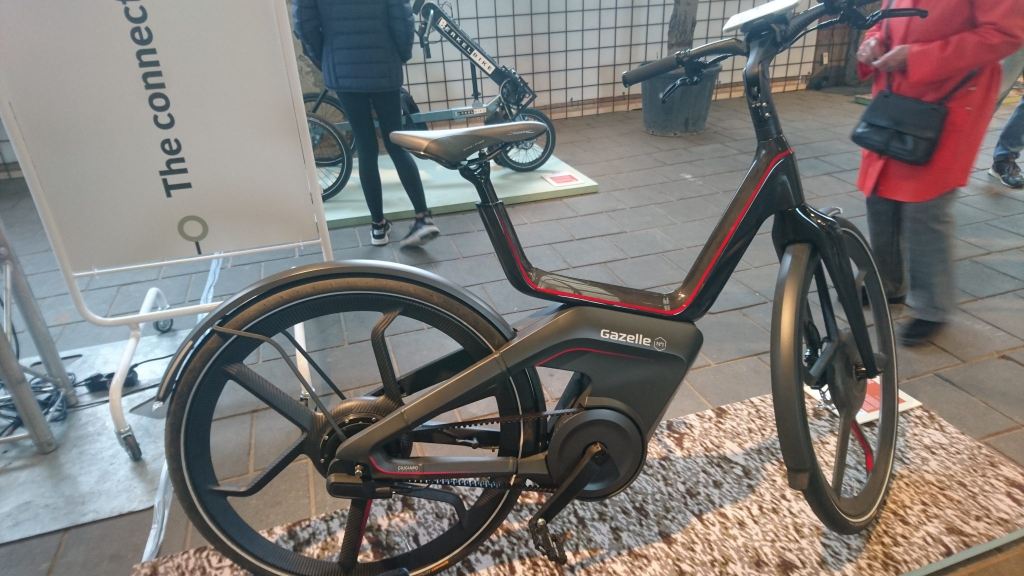 Cuppen points to a top-notch Gazelle, called concept n1. The construction is a bit like a vehicle from the sci-fi film Thron. It has a silent electric motor that can support up to 45km/h. The bike is equipped with a smartphone holder, which you are always connected to. “You can view routes, receive warnings in case of traffic congestion or roadworks. With a special button in the handle, you can answer phone calls, but – from a safety point of view – only if you are not driving faster than 5 km/h. I cannot imagine that people are willing to take action on this, let alone be seen to be part of it. Fortunately, this is only a concept version and this futuristic space scooter is nowhere to be sold.” But according to Cuppen, these kinds of bikes – equipped with the latest technological gadgets – are going to come. “It is already possible to lock the bike with an app, or even with a fingerprint scanner on the bicycle. The electric motors are also getting better and quieter. Whatever else helps: people accept electric driving more and more.” 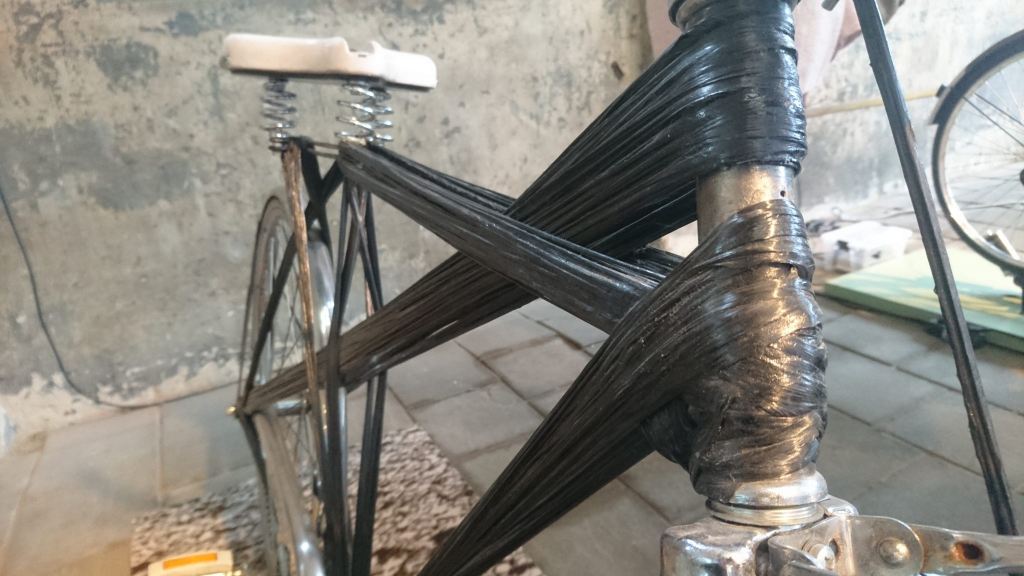 The exhibition not only includes bikes with the latest technological gadgets, but also arty bikes such as the Carbon Beach Bike by Tjeerd Veenhoven. He collected old bicycle parts and made a whole with carbon fiber and epoxy. The bike that is shown is a second version, made with chrome parts that are no longer made because of the polluting production process. This bike is also held together by several wires of carbon. “Carbon is not such a very difficult material, but because of the different ways of weaving, it provides a weight vs. strength advantage. This makes it high-tech. In my project, it is more intended as a problem-solving material, not as something high tech. It is more of an exploration. For do you imagine that in this way you can produce wheelchairs in developing countries? There is only 8 euro of carbon in this bike.” 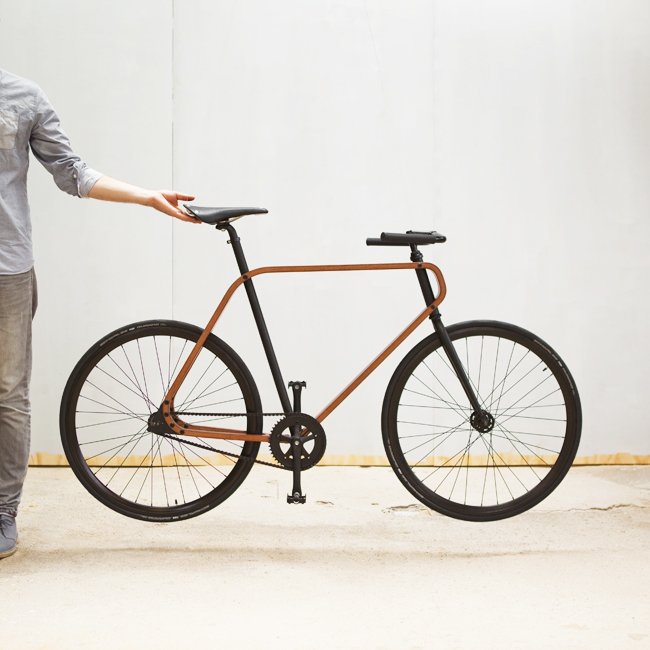 Someone who does offer his bike is Jord Alma, he wanted to develop a bicycle that consisted of one whole. He started with aluminum but soon ended up in wood. “One tube of aluminum would soon tear, the corners are quite sharp. Wood is, of course, an incredibly machinable material. The veneer was my preference, you can build it up in layers and bend in all directions.” Alma assures us that it is a labour-intensive process, he needs up to 100 hours with one copy. For extra stiffness, he adds carbon fiber between the layers of wood. When asked why the bike is not completely made of wood, he starts laughing: “Look at the sandwich bike, there you have a super angular front fork, it fits well in that model. But when I build such a fork in my bike, it detracts from the tight lines.” Alma says a tighter, narrow fork is also not possible, a fork receives all the bumps in the road and must, therefore, be able to withstand a lot of resistance. For the next model Alma wants to see if he can integrate lighting into the wood. “That it shines through it, just like you sometimes see it with wall clocks.” 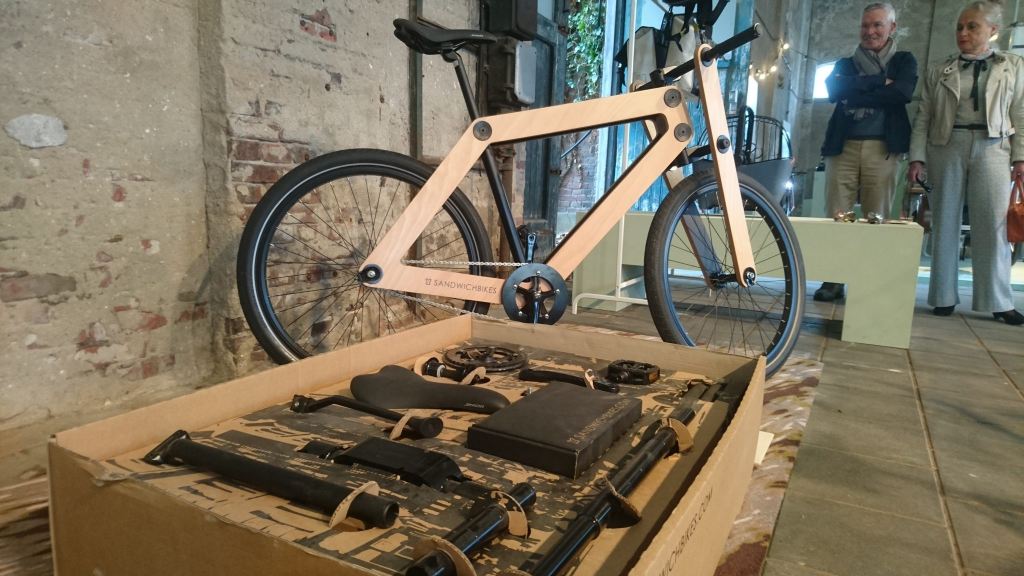 The Dutch Bike Expo has not only parked bicycles on the NRE grounds but also in the Klokgebouw and on the Torenallee, there are several bicycles.