A constant coming and going of buses, thick rows of students waiting to get inside the Klokgebouw. Once inside, they spread slowly in the large halls. At first cautious, later, gesticulating and pointing. The enthusiasm is growing. Thousands of visitors enjoy the Night of the nerds.

3D printing, VR gaming, IoT, robotics, coding and more. Several clinics where children are introduced to different aspects of technology and engineering. They also look around to find their ideal college and their dream job. Big players like Tesla, VDL, Philips, ASML, Bosch and Vanderlande are all represented at this mega exhibition. The TU/e and Fontys are visible as well. 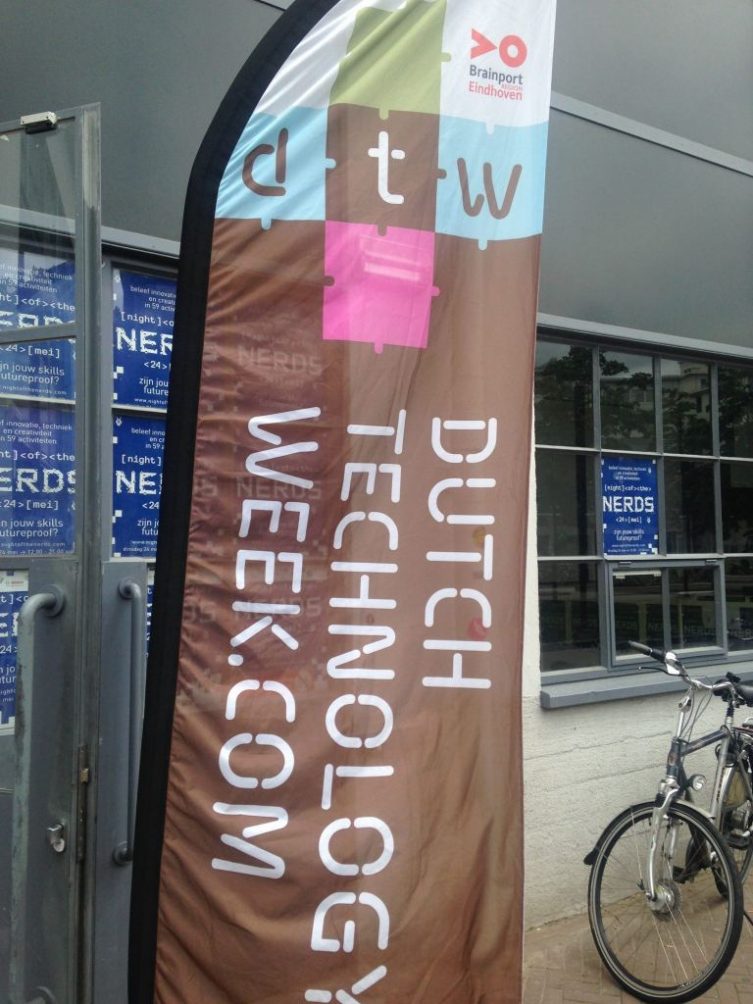 Big crowds at the VR gaming stands, students with big glasses on their heads, slapping creatures in the virtual world. “It’s not that we are here only to find new students”, says Jack Hoefnagel of Fontys, where he is a lecturer in game design and technology. “To introduce children to ‘my’ world is today’s goal, because in a few years time this is the norm.” He must dive for the gestures of a boy, wildly waving his arms to graze a monster, while on his screen luminous balls are fired as bullets out of his hands. Hoefnagel continues: “Now we are trying everything in VR, but it is becoming increasingly serious. This technology is still in its infancy, which means that there are lots of new things to come, like virtual cinema.”

He explains to the attending students how a game is being tested and improved. He enthusiastically points to a big screen next to the games. He says that there is a camera linked to software that monitors the expressions of the players. “The program can ‘read’ facial expressions and emotions with a camera, this is essential for the improvement of games. If for example, we see that a gamer gets angry and gets stuck at a certain level, we know that level needs to be adjusted.”

But this software will be used increasingly outside the world of gaming: “Think of security, crowd control and face recognition. Think of living labs, like the ones already around in Eindhoven.”

The students are hardly listening, they prefer to play. Tim, 4th year secondary school at Elde College in Schijndel: “This is cool! I think we can all be in this virtual world together, one day you don’t need glasses anymore, it’s wireless. You know what would be cool? If I can set up some glasses and go visit someone to meet up. That’s better than whatsapp.”

Besides gaming, the most interested students get a speed course for game coding. Timo from Kadinsky Nijmegen (4vwo) is sitting behind a laptop, he is busy dragging square blocks onto his screen. “I now make a very simple game, it’s all explained”, he keeps the instructions in front of him. “It’s actually not that difficult. But I think it’s more fun than I thought. You can always see what you’ve created.”

Timo wants to do industrial design as a study and knows where he wants to go: “Eindhoven! I just talked with two students from that course and I saw what they have created. Programming is fun, but I find it more interesting to make something tangible.”