Around an hour before Mark Rutte, Prime Minister of the Netherlands, spoke to the country to announce an extension of the measures to combat the coronavirus until April 28th, more than 100 people gathered on Zoom, from app developers to students, nurses and other healthcare professionals. All were eagerly awaiting the results of the first online hackathon of Dutch Hacking Health. From Friday morning to Tuesday afternoon, the “hackers” came together digitally to work on their “hack corona” ideas.

Just like with every hackathon, participants started the day with a joint cup of coffee, not physically, but online via Zoom, to discuss their progress, ask for help with certain subjects or just to share a compelling story. After coffee, teams continued in their own online workshops. If they needed help, they could contact various experts offering their services in the general area of the hackathon. Here coaches gave tips about online collaboration, participants helped each along and links to master classes (also provided via a Zoom link) appeared. In fact, everything you encounter during a real hackathon happened, just online.

On some teams they don’t notice any difference with the real world, but others have more trouble with it. Muriël van Oers is a student at the Delft University of Technology and works at the sleep start-up Somnox. She explains that in the beginning it is difficult to find out who is good at what. “Usually you survey people a bit at first, but you can’t do that online. It’s super hard to feel that. Then you can dive right in and get to work. In the beginning it takes some getting used to. But you adapt to it very quickly – you have to.” 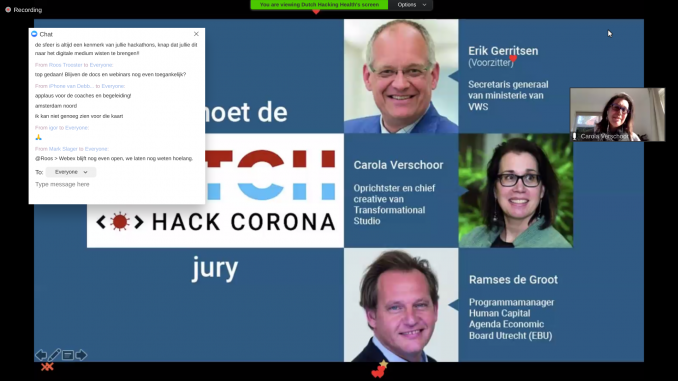 An online hackathon does have its advantages: “You can make an appointment a quarter of an hour in advance to discuss something. That’s much quicker. But I do think that getting together physically works better, especially if you work together on a project for four days,” Van Oers explains by telephone.
Getting together wasn’t an option, and with her team of six to eight people she worked about six hours a day on their “Together at a Distance” project. “Not everyone is equally active; in the beginning others did a bit more. That’s why I say a team of six to eight is good. We’d put in about four hours a day, but that soon turned into six,” Van Oers says enthusiastically.

Van Oers and her team won the Best Human Centered Design category. The online printable booklet that the team came up with touched Van Oers personally. “Over the past few weeks, my grandfather had been in intensive care; he passed away last week. I was able to say everything to him, but some family members were not. That is painful. With this booklet, which you can fill in online as a PDF or print out, we want to offer people a beautiful end to life.”

Among other things, the booklet contains practical tips that make life a little more bearable for people in closed wards and their loved ones. “It sounds very stupid, but because of the stress we forgot while were at my grandfather’s that we could also make video calls. Simple tips like that offer a solution. But it also has to be a kind of diary where a patient can share photos, memories or other things with family at a distance. Anything that can serve as emotional support at such a difficult time is useful. We want to try to help patients so they don’t feel like they have to die alone.”

Another finalist is Christine Changoer, who came up with a translation website together with her team where the latest information on corona is translated into different languages. The team engages various organizations as ambassadors for this. Changoer normally works as a consultant in the financial or industrial sector. “I find it important to delve into other subjects as well. The sectors for which I normally work are generally quite hard. I don’t do enough care assignments.”

Changoer has Surinamese-Hindustani roots. Her great-grandparents came from India and she herself was born in Suriname. As a young girl she lived in an asylum seekers’ center in Friesland, Netherlands. “I don’t think that my grandmother – who was illiterate – would be able to go through this. She would understand far too little about it. This subject is close to my heart, so I had to do something with it. Even now there are still people who don’t speak the Dutch language. We want to help them.” 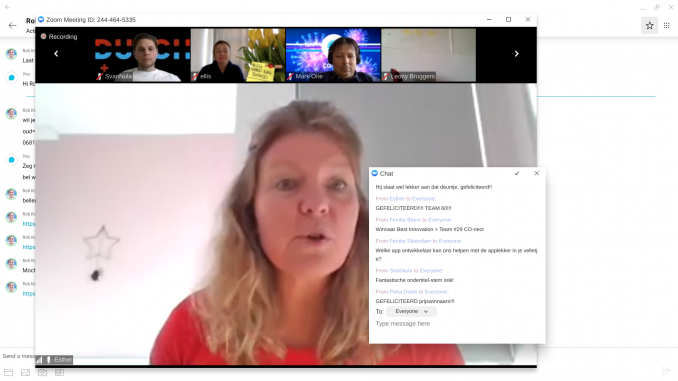 A human way of connecting

It was Changoer’s first time in a hackathon and she is amazed by the energy: “It is important that we don’t just look at this corona crisis too narrowly; it is really a social problem. That’s what I like about this; everyone wants to contribute. Help really comes from people and we have to do it together. I only got involved on Monday and I think it’s really cool to see that I can do something with people I don’t know at all – I don’t even know what they look like – in such a short time.”

“It opened my eyes. Now you see how quickly we can get things done together. We don’t judge each other by ego. It doesn’t matter what someone’s accomplished, what someone earns or what company they work for. It’s about connecting in the human way, teamwork. Great things happen when we’re working with each other. I hope we can hold on to that after the crisis.”

Changoer and her team were not chosen as winners out of the five finalists. Besides Best Human Centered Design, the jury also chose Best Data Driven, which was won by Wavey Bubble. The team of CO-nect won for Best Innovation. There was also an audience award for Lekker in je velletje (which translates as “Delicious in your Skin”). The three winning teams will compete in the national finals at the end of this year. Teams that want to develop their idea further can contact the organization for this.