Technology plays an ever-increasing role in our lives. Every day, new technological innovations emerge that improve efficiency in traffic, healthcare or the office, for example. Onging improvement has become part of our lives. But don’t we lose sight of our loved ones in the process? Four young men with a technical background want to show that innovation is not always all about technology. They make a relatively simple web application that allows you to invite your loved ones for a secret and special rendezvous. This is how they want to contribute to the connections, experience and emotion that their generation is seeking.

“I once bought two concert tickets on the sly to surprise my girlfriend for her birthday. It was so great to look forward to that time by giving her a hint every now and then, but not telling her where we were going. We had a lot of fun leading up to the concert and that made it even more special,” says Germain Miedema, co-founder of Hintle. He now wants to offer that kind of experience to other people as well. That’s why he developed an invitation platform together with three friends.

On- and offline clues

Via Hintle, as the platform is called, users can conveniently send an invitation for an outing or an event. First, a package is dropped on the recipient’s doormat with the first clue and the event’s date. In addition, the recipient receives a code which allows them to ask for several clues online. “This way you can really present an experience as a gift. That’s much more fun than a gift from the store,” says Miedema. “For me and my girlfriend, the anticipation surrounding the concert made it a unique gift. It felt extra special even though we go to concerts and festivals more often.” 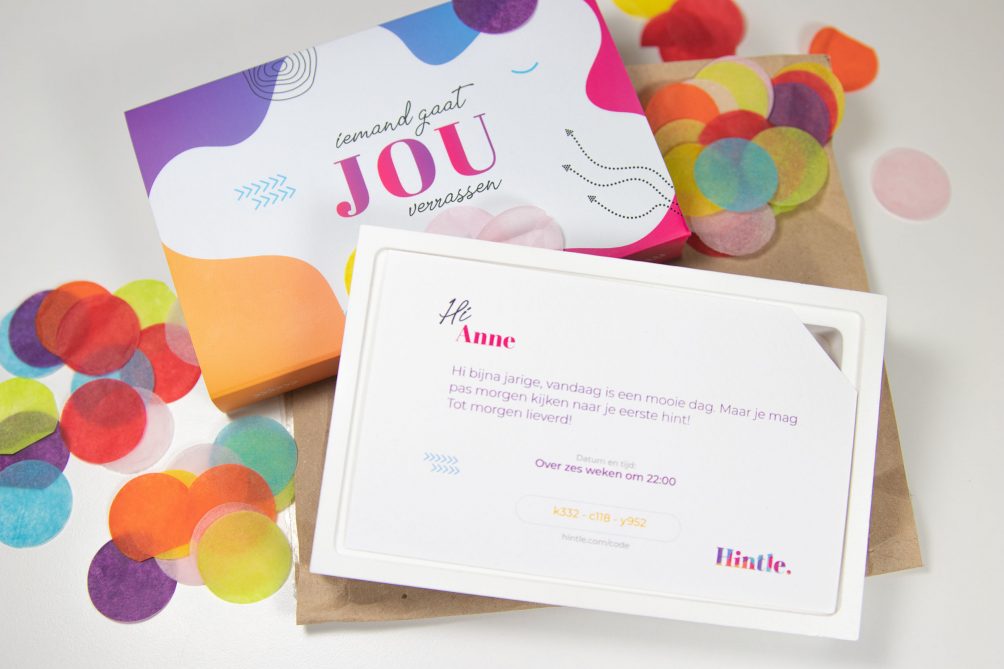 A gap in the market for company outings

It’s nice to provide an experience, but it’s also a lot of work. That’s why Miedema wants to relieve some of these tasks with Hintle. “We take care of all the peripherals such as sending the package on time along with the clues. This way, the sender only has to think about the fun things, such as coming up with the content,” he explains. This is convenient and fun for private individuals, as well as definitely for companies who are arranging a company outing. That’s what the start-up is mainly focusing on at the moment. Miedema: ” For instance, there is often a shortage of staff at a lot of companies. Announcing an outing via Hintle can be a way to hold on to people and encourage more commitment.”

Hintle has been actively looking for investors as of this month. Among other things, they are taking part in programs organized by Braventure, Leapfunder and the DEMOlab from the Eindhoven University of Technology in order to find the right form of funding. “We want to become a European platform where people can show their gratitude to others,” says Miedema. “In order to achieve this, we want to expand into a well-known platform throughout The Netherlands between now and the coming year.”

The start-up will run its first pilot at Stichting Het Vergeten Kind (The Forgotten Child Foundation). “They find our concept very interesting and would like to work with us,” Miedema says proudly. This foundation is also very important to him personally. “I myself grew up in foster families and community homes. The Heppie Weekends from Stichting Het Vergeten Kind were great trips that I really looked forward to. I now look back on them with a smile. To be able to contribute to that experience for other children is already a dream come true for me.”

The most important goal for Miedema is to bring people closer together. “There’s a lot of polarization right now. Everyone is ‘connected’ via Facebook, but less and less so in the real world,” he says. “I think people need to think more about the people that they have around them.”