Sometimes things can move very quickly. Last February, these four students from the Eindhoven University of Technology (TU/e) and their fellow student from Radboud University had not previously met each other. They got to know each other through a project at Innovation Space at TU Eindhoven in the Netherlands. The assignment: to develop a cognitive training tool for the Dutch PSV football club. The five of them went on to develop a working prototype, won three prizes in two competitions, registered as a company with Aristotle at the Netherlands Chamber of Commerce, and signed a contract with PSV for a long-term collaboration.

“We have become real buddies,” says Maurits Overmans, co-founder of the start-up. “Right from the start, we promised each other to really go for it. We are building a bright future for ourselves, together with the organizations that have placed their trust in us from day one.”

During the project, the students went further than what the assignment stipulated. They came up with a working prototype, while a worked-out idea would have sufficed. Result: ten out of ten. In part due to the support from PSV, they were driven to go the extra mile. “The sports scientists at PSV gave us the confidence and the opportunity to flesh out our idea even more. Thanks to their constructive feedback, we were able to take the step towards a working prototype,” Dirk Aarts, co-founder of Aristotle, adds.

The software from Aristotle offers scientifically-based cognitive tasks, Aarts goes on to explain. It helps the sports scientists train the players on an individual basis to be able to react, decide and act more quickly on the field. Overmans: “On the field, players have to make choices continuously. They have to be able to anticipate, suppress impulses and act promptly. The playing area on the field, and with it the room to move, is becoming more and more compact; more players on a small part of the field. Players are under pressure and need to be able to deal with that stress. They have to make the right choices at the right time so that they can bring added value to the team.”

How does it work? A player sees cognitive exercises appear on a screen in front of and beside them. Using a hand-held controller, the player interacts with those exercises. At the same time, they also practice football exercises. Dynamics on the field are recreated this way.

Normally, you take a cognitive test on a laptop, Aarts points out. “That’s very static and eliminates the social dynamics that are present in real-life situations. Adding the controller allows you to step away from your laptop.” Overmans: “By combining cognitive and physical exercises, the players are being exposed to an overstimulation of the brain. In this situation, they have to keep on performing and learn to adapt.”

With this cognitive training, PSV is mainly focusing on young people aged 13 to 23. Overmans: “They have to learn to deal with the overstimulation on the field. A trainer can bring them into a controlled situation, so to speak, where the pressure is high.”

Each player receives a personal profile. A score is then given for every exercise. This enables the trainer to follow the progress of individual players and adjust the training to suit their individual needs. PSV has set up a separate training area for this purpose.

While working on their project, the students decided to enter the TU/e Contest, a competition that challenges students to turn their idea into a product. They won the Talent Award and the Audience Award. Then in November they went to Helsinki for the Slush international start-up event.

Overmans and Aarts appreciate the support that the team received and is still receiving. Overmans: “I don’t know exactly when it started, perhaps during the course or maybe even due to the TU/e contest, but I found it really great to see that so many people supported us. From within the TU/e Innovation Space, but also from other people outside of the TU/e. A kind of support network has since sprung up made up of people who we can turn to for advice, people who can tell us what they have come up against, or who just want to talk to us. I don’t know how this came about, but we are very grateful that it did.”

Last October, the team had a booth at the Dutch Design Week in Eindhoven. It was there that they noticed the interaction they were having with users. Overmans: “We got positive feedback from everyone. People find it a lot of fun to do and they understand the idea behind it.”

“We are a software company, but the beauty of it is that we have very close contact with the people who are going to use the techniques,” Overmans continues. At PSV, those are the sports scientists and the players. But the start-up isn’t just focusing on elite sports. “We also want to help people who need to rehabilitate or have difficulty learning,” says Aarts. Therefore, the company is also developing software that can support people who have learning disabilities in their personal development. “In future, we could expand this to include prevention or rehabilitation in healthcare.”

“We want to improve the quality of life for those people this way,” says Aarts. Overmans: “If you can’t keep up with the regular educational system, then you also miss out on forms of social participation. The disparity only becomes worse then. You can participate in fewer things. We want to make that disparity smaller.”

The human aspect is at the very heart of Aristotle, Overmans emphasizes. “The main driver of the whole process to create our tool has been the interactions with the users. Thanks to the intensive cooperation with the sports scientists at PSV’s training complex, we were able to move very quickly to start using the technology. That key role that users play in the overall development of our software remains paramount. The human aspect is very important to me personally and to our entire team I think.” To which Aarts replies in confirmation: “That is definitely the philosophy behind our programming work.” 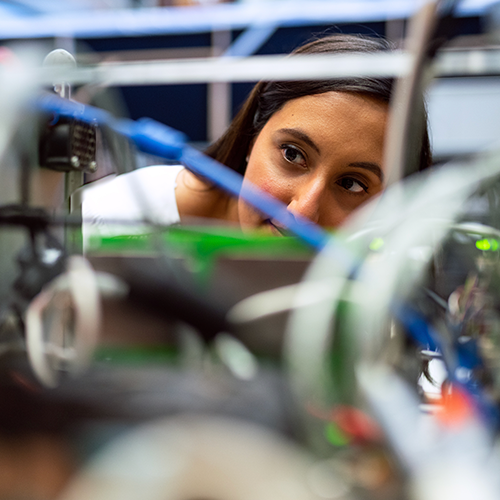 valorization section – Innovation Origins
Read the other stories in this series here.

This story is the result of a collaboration between TU Eindhoven and our editorial team. Innovation Origins is an independent journalism platform that carefully chooses its partners and only cooperates with companies and institutions that share our mission: spreading the story of innovation. This way we can offer our readers valuable stories that are created according to journalistic guidelines. Want to know more about how Innovation Origins works with other companies? Click here

'I hear too often that women have to be harder, more…
Data helps PSV Eindhoven rear young talent, but coaches are…
Holland High Tech is cashing in on opportunities for the…
The enterprising student easily beats professor
Wireless brain-computer interface from imec: 'Eventually, we…
Recruit more tech students with a VIP tour and by building…