Bringing a loved one back from the dead, in the series Black Mirror it just happens. A robot replaces the deceased man to give the widow the feeling that she is not alone. This causes uncomfortable situations: the robot ‘sleeps’ with its eyes open and physical contact feels different than with a human being. The replacement fails. In the real world, too, people are experimenting to make robots as humane as possible: Chatbots that attempt to read emotions, robots that look so much like people in terms of appearance, that it is scary. The techniques for this are becoming faster, better and more powerful. Robots are taking on more and more tasks. The big question that keeps coming back is: how will robots and humans live side by side in the future? And can you love a robot?

Robot Love tries to answer these questions. More than 50 international artists, designers and scientists will show their work during the exhibition that starts on 15 September in the milk factory on the former Campina site. In addition to giving answers, Robot Love wants to stimulate a discussion. Daniël Bouw of Robot Love explains: “Are robots capable of loving? They are coming; we cannot stop this development. In the future, interaction between man and robot will become increasingly normal. Care robots can already be found in the care sector where people have to deal with on a daily basis. How are we going to deal with this? But it also offers opportunities: some relationships between people are far from ideal. What we as humans cannot do, can succeed between people and robots.”

With the chatbot PIP, who wants to learn what love is, Robot Love tries to stretch boundaries. The chatbot sometimes asks for attention with messages via Facebook. Bouw: “Just like real people, PIP needs attention; if you don’t ask PIP anymore, ‘it’ will seek contact itself. This makes you think about empathic ability in relation to (chat) robots.” In addition to the online bot, visitors to the Milk Factory can also speak with a physical robot. Bina-84 is based on an actual person, a so-called mindclone. Stephanie Dinkins investigates whether people and machines can become friends. “But this project is also about human consciousness. And how people can survive outside of a body. What does it mean to be human?” says Stephanie Dinkins on her website about the conversations with this humanoid.

In this video, Dinkins tells about the project:

Not only the beautiful aspects of the technology are discussed. For example, people are currently scared of artificial intelligence or robots that take over their jobs, and Bouw does not find this entirely unjustified: “Without losing sight of the dangers, the exhibition shows that there can also be positive aspects to this. People are given more free time, work will change and perhaps this will become more interesting in the future. However, it is important that we reflect on this now. You can also see where things can go wrong: Hell Yeah Fuck, by Hito Steyerl, is a good example. We think we are very far in developing technology, but this project puts that idea into perspective.” 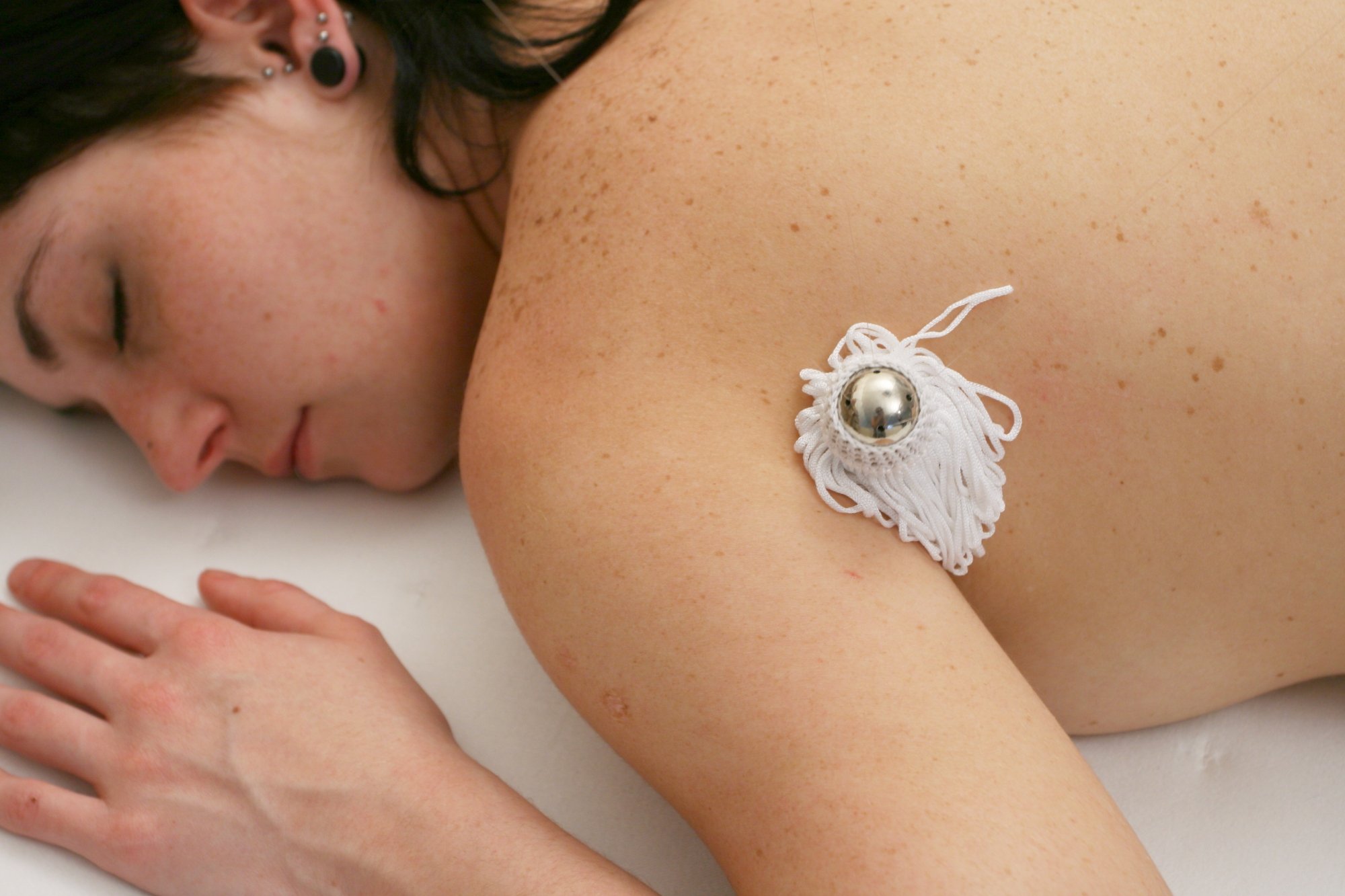 Another important theme of the exhibition is physical contact between man and robots. Artist duo Driessens & Verstappen have been working on this since the nineties, developing various versions of ‘caress robots’. Maria Verstappen: “My partner and I like to caress each other, but if you don’t always feel like it, it becomes something to please the other. Precisely then the attention you put in is less. The other feels that the movements become monotonous, like a robot. With our robot, you don’t have to burden the other with your need for touch.” The system consists of a brush that hangs on four wires. By keeping track of the length of each wire, the computer knows exactly where the brush is located in the room. A sensor that is sensitive to the tension on these wires is triggered when the brush touches the body. In this way, the device makes ‘maps’ of the human body.

In this updated ‘tickle robot’, users indicate whether or not they like the touch. By pressing a green or red button, the machine receives feedback that it stores and links to a location on the body. The robot is self-learning: as the session progresses, it becomes more and more familiar with the shapes of a body and is able to find its way to places that someone likes. Verstappen: “Software makes the greenest possible route from the data points of green and red areas. In order to explore the body, it is sometimes unavoidable that the tassel passes over red areas. But that makes it exciting, just like in real life there is another element of surprise.”

Robot Love can be visited from 15 September to 2 December at the Campina dairy. Outside the exhibition, there are numerous lectures and other events to be found.

A Black Widow wins the Brainport Industries Campus Drone…
Sustainable living does not stop after death
Academic heart, commercial head
'The best scientists also have start-ups'
Combatting poverty and debt with the help of Artificial…
'I hear too often that women have to be harder, more…
Manage Cookie Consent
We use cookies to optimize our website and our service. Help us to make our site better by accepting all cookies.
Manage options Manage services Manage vendors Read more about these purposes
View preferences
{title} {title} {title}