Ex-elite handball player Tim Mullens (Geleen, 1982) is delighted with the headline. He can now work together with business developer Menno Smeelen to further roll out the innovative and sustainable ideas for the sports world. Mullens himself was captain of the Limburg Lions for seven seasons, played handball in Belgium and Germany and also played 30 international matches for the Dutch team. In addition, he has worked as a therapist in a rehabilitation center and did a masters in sports and exercise innovation, because his sport is not something you just waltz into.

Top-level sport proved to be an excellent school of learning for the business world. “You learn to deal effectively with performance pressure, setbacks, criticism and as a former captain, I really know how to form a good team.”‘ He still works one day a week for the province of Limburg; he coaches sports talent who are physically challenged on their way to the Olympics.

Mullens received the request from the national Sport Innovator Center to set up just such a center in collaboration with the Brightlands Chemelot Campus in the Dutch town of Geleen. Tim Mullens: “There was actually nowhere to turn to for questions about sustainability and materials in sport.”

This has since been arranged, and the certification is a testament to the idea of linking the expertise of over a hundred companies on campus to requests from the sports world for innovative and sustainable materials.

Each Sportinnovator Center in the Netherlands has its own focus. In Eindhoven, this is swimming, in Heerenveen, ice skating, at Equinnolab in Weert it’s equestrian sports, and at Shimano in Valkenburg it’s all about cycling. But the  Royal Dutch Football Association (KNVB), for example, is also one of these centers. The centers form a large network that should help (top-level) sport move forward. Mullens: “It is an ecosystem that provides knowledge, networks and ways to obtain financing. We try to ask relevant questions about innovation through the use of challenges. We will then look at how and where these can best be answered and how things can be financed.”

Even though the certification hasn’t been in place for very long, a number of innovations on campus are already fitting in nicely. Take the 100% Limburg Bike project, a personalized, unbreakable bicycle. “Here, it’s not necessarily about the bike; instead, the bike is the innovation platform. Nine companies are showcasing their technology through the medium of a bicycle. This is basically aimed at the automotive or aerospace industry. For example, a bicycle can show that carbon can be woven into a very strong frame. A car brand has seen this and the technology is now being used there too. So it’s not just about the bike, even though they are looking for a company to market this unbreakable bike. It’s a platform to show the world what you are capable of.” 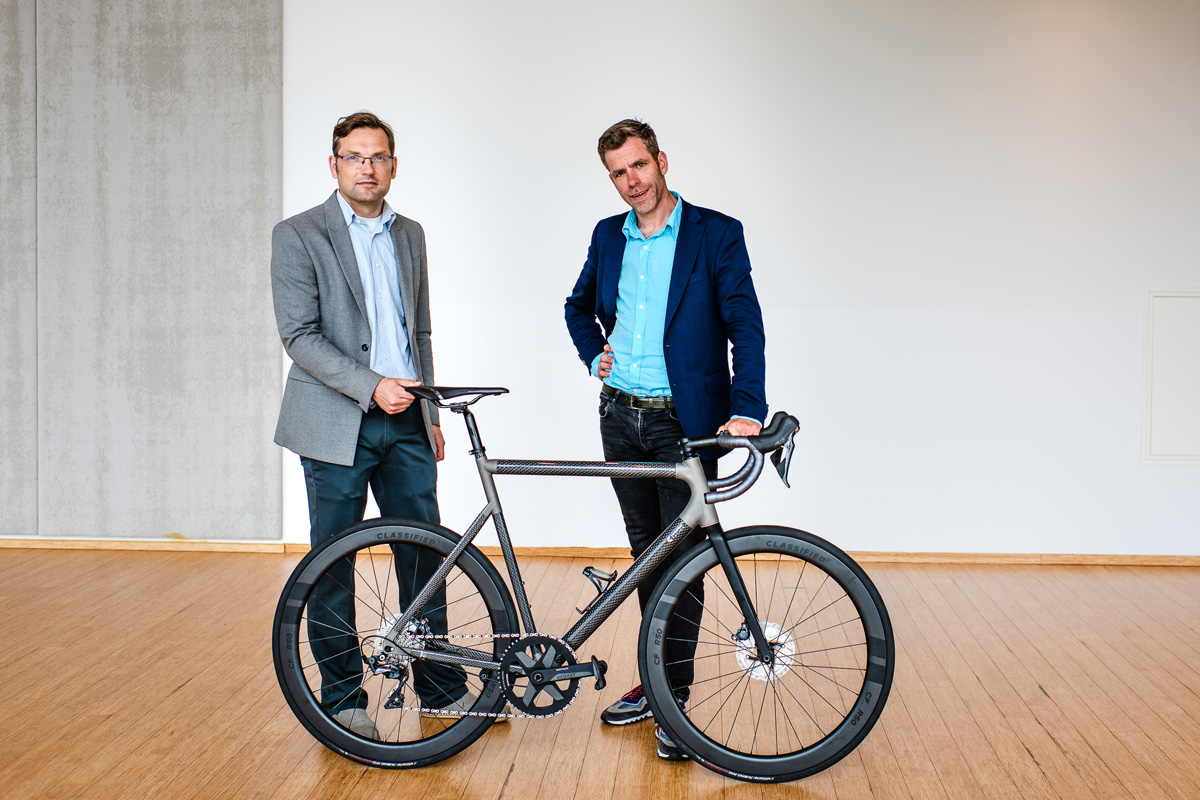 Bram Tankink’s 100% Limburg Bike is one step closer to a market launch – Innovation Origins
The 100% Limburg Bike was developed at Brightlands Chemelot Campus with a consortium of entrepreneurs, researchers, and students.

Elite athlete Mitch Valize with his handcycle also fits seamlessly into this concept. His bike was improved thanks to the knowledge on campus. Another example is Mullen’s own company Greenholds that aims to make climbing halls more sustainable with recyclable, circular climbing grips.

There is also a request from former pole vault world champion Rens Blom who has devised a circular concept for used poles. He asked Brightlands to help him come up with ideas for the production of a scanner that can check poles and other sports equipment made of carbon or glass fiber for defects in order to safeguard the safety and reliability of used material.

Mullens: “Rens is the project leader, we are supporting him as facilitators. We bring people around the table to answer his question. This means that he has an innovative idea as to how these poles can be reused; and we will find out whether this is technically feasible. If it is, we will see if we can conceptualize it.”

Menno Smeelen is the conduit between the businesses on campus and the world of sports outside. Mullens: “The great thing about it is that many of those companies on campus have never thought about gaining exposure through sports. Sport as a test environment, as a fieldlab. People come up with innovations but don’t come up with the idea that you can make a sail for a sailing ship out of Dyneema® fiber, for example. Of course, the coating they use on cycling apparel was not originally intended for bicycle clothing. I’ve had a business myself for six years, you have to keep your focus, the possibilities are endless.”

In the fall, the Brightlands Sportinnovator Center is planning to set up an event for companies, governments and the sports world to discover what kinds of innovation are wanted and whether they can be capitalized on. Mullens is thrilled to be able to make use of the Brightlands network. “At the first meeting with Sportinnovator, the brand manager, the community manager the communication manager and the business developer were all present. The site was ready within three weeks. That is the main advantage of operating under the flag of Brightlands. Otherwise it would have become Mullens Sportinnovator Center, well. probably.”

Move to live: how Move to Be wants to get the country…
‘I want my children to be able to live in a clean world’
Use awareness as a weapon against childhood obesity
Cultured meat inventor Mark Post: 'Less pollutants in…
Bram Tankink's 100% Limburg Bike is one step closer to a…
Holland High Tech is cashing in on opportunities for the…