This article is an introduction to the series on Campuses in North Brabant. In the next 8 weeks, we will publish the profiles of all of the innovation campuses that were mentioned in the recent study by Buck Consultants International (BCI). Every Tuesday, we highlight one of them. Here are all the articles that have already been published. 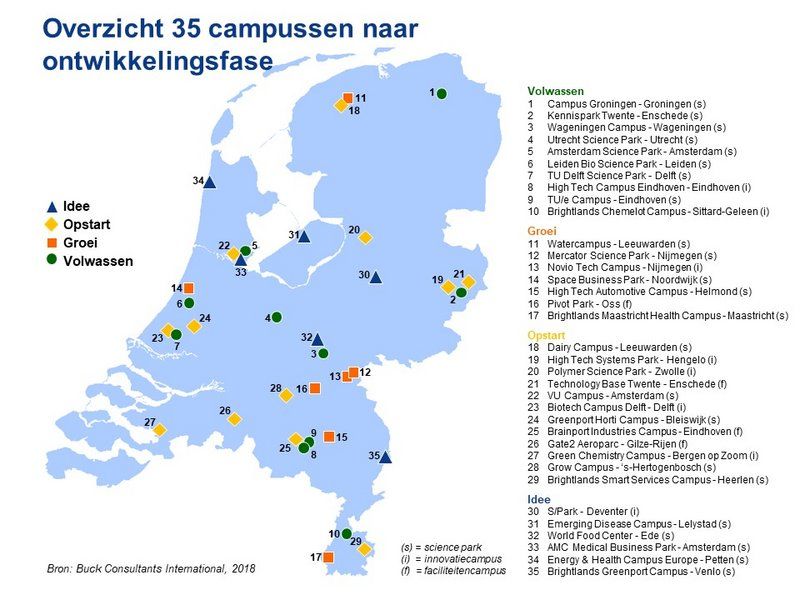 BCI defines a campus as an accelerator of open innovation, a “living environment” for research departments and research facilities which invites international knowledge, institutions, and companies. BCI assesses a campus on the basis of four core elements: focus on R&D and/or technology-driven activities; high-quality locations and research facilities; the presence of substantial knowledge carriers, such as a university, a university medical centre, or a research institute; and active open innovation. BCI reviewed 82 locations in total and classified 35 as “real” campuses.

The province of Brabant is proud to have eight of these accelerators of open innovation in its territory. Each campus is an essential contributor to the Dutch knowledge economy while together they boost employment in the province with a total number of 15,019 people working at 439 companies, 129 of which are startups.

In addition, there are 11 more innovation hubs in North Brabant which have not made it to the BCI list and which are classified as “not real campuses according to the definition”. Yet, they form an integral part of the open innovation and technological development in the province: Philips Healthcare Campus; Science Park Ekkersrijt; Business Park Aviolanda; Food Tech Park; Strijp S; MindLabs Spoorzone Tilburg; Supply Chain Campus Dinalog; Health Technology Park; SPARK Campus; JADS – Campus Mariënburg; and Nieuw Prinsenland.

Each of the campuses is a booming hub that breeds talent, accelerates technological development, and boosts networks of education, applied research, and entrepreneurship. Together they are the engine of open innovation in North Brabant and an essential component of the Dutch knowledge economy development.

This article is an introduction to the series Campuses in North Brabant. In Part I, we will introduce you to “the smartest square kilometre in Europe” – High Tech Campus, Eindhoven.