Last week was one of the best in the history of Innovation Origins in terms of the number of visitors. Our articles have been read more than 25,000 times on our website. Soon we’ll be hitting 100,000 page views! As we are an international platform, it is always nice to see where our readers come from. Google Analytics tells us that Americans and Canadians in particular are very interested in the invention of a quantum interface by Professor Fink from Austria. The English translation of the article was very well read, especially in countries where it was published.

If the number of clicks were also to be used as a measure for developments in innovation, we would have to monitor two developments even more closely in the near future: quantum computers and artificial intelligence. TU/Eindhoven, considered by many to be the most innovative city in the Netherlands, is funding a new institute in this field to the tune of €100 million. This news was our second best read article of last week.

But honour for those who deserve honour: the quantum computer. Innovation Origins is once again looking at the bright future of the computer which promises an internet with unlimited possibilities. We asked Professor Johannes Fink, who leads the project at the Institute of Technology (IST) in Austria, for more details.

The researchers surrounding Professor Fink have been working for several years on a solution that makes it possible to transfer data from one quantum computer to another. The research problem lies in the electronics of quantum computers, which only work at extremely low temperatures. During transmission, the information should traverse a high-temperature environment where it is as yet still unable to exist. 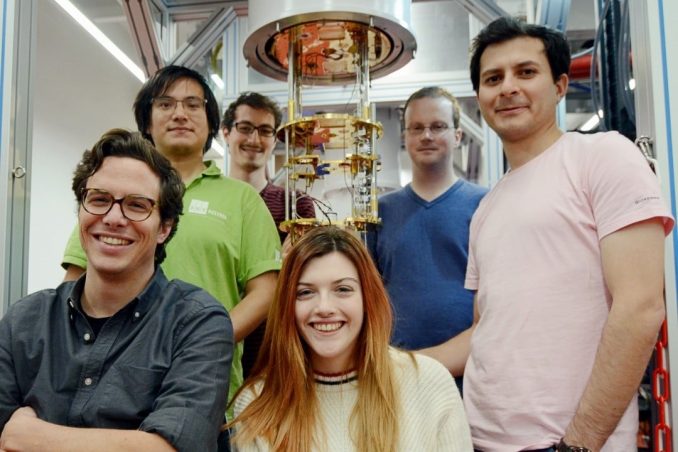 Johannes Fink (front left) and leading writer Shabir Barzanjeh (far right) with their cryostat team. Photo: quantumids.comThe Viennese team has now succeeded in developing a device that generates entangled microwaves and optical fields as a basis for quantum teleportation. The researchers use entanglement, one of the basic principles of quantum mechanics, and were the first to generate entangled radiation with a mechanical object. They immediately solved another research problem: the silicon beam they produced was thirty microns long and had a total amount of about a trillion (10^12) atoms. This is huge for the quantum world. Quantum effects are most easily exploited at the atomic level. It is much more difficult to realize them on a larger scale.

In the following interview, the head of the Integrated Quantum Systems project group of the Institute of Technology (IST) Austria gives further details about the research project: 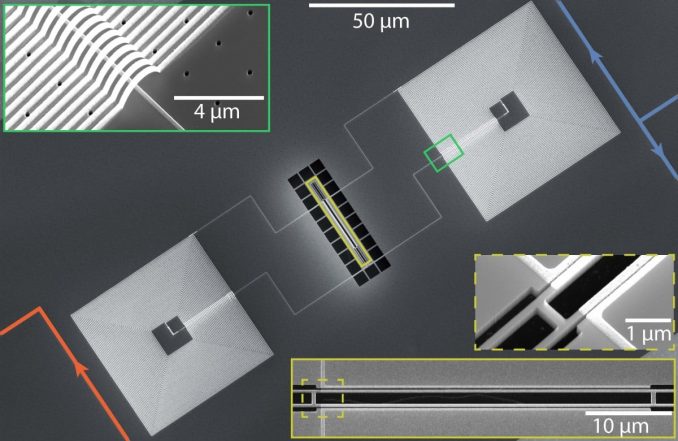 A microchip from the project. Quantumids.com

Above image: Two thin films of aluminum spiral resonators are suspended from a 220 nm thick silicon membrane and are then attached in the middle via capacitance to a micro-machined mechanical nano-oscillator.  By using disentanglement within two pump fields, this microchip delivers a continuous stream of entangled microwave images to the device’s two clamps.

How long have you been researching this problem?

Fink: “We’ve been working on this particular experiment for about a year. But the results are based on results such as the specific design and production technology of the electromechanical microchips that I helped develop three to five years ago at Caltech in Pasadena (CA)”.

What have you done differently from previous researchers?

“We have succeeded in attaching extremely small silicon beam reflections to the microwave field in a relatively powerful way. We managed to do this by making some circuit elements extremely miniaturized.”

What was the biggest problem you had to overcome?

“Aside from the production of the microchip, it was a challenge to calibrate the measurement very accurately and to exclude all artefacts [unintentional statistical deviations – ed.] in the measurement setup.”

And what was the solution?

“During the production, we combined ideas from silicon photonics, MEMS ((microelectromechanical systems) and the world of superconducting circuits. To do this, we used a dry hydrogen fluoride process in order to release the silicon beam and make it freely manoeuvrable.

For the calibration we used mechanical switches that are still able to be used at 0.01 degrees Kelvin without heating up the experiment. We then used it to switch back and forth between a temperature-controlled sound source and our component. 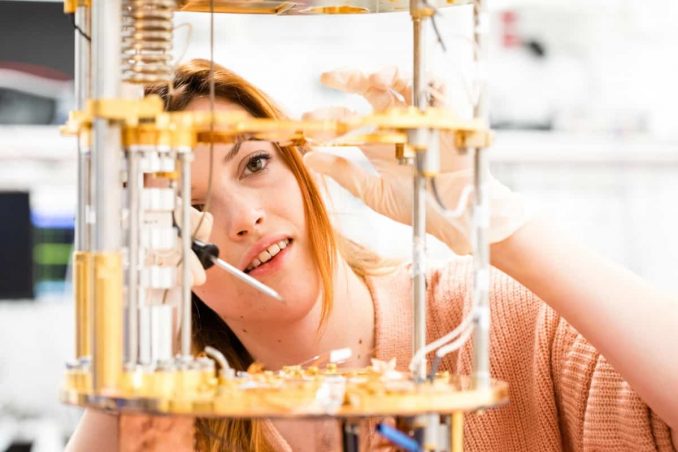 What distinguishes this prototype now from an application for a quantum computer interface?

” In order to do this, we need to link the silicon beam to an optical field and combine optics with microwaves. The optical signals can therefore be used as information carriers for longer distances between cold quantum computers at room temperature”.

What happens now? Is the project going to be developed further into an interface for quantum computers?

“We have been working on this goal for about three years now and are already able to convert microwaves into optical telecommunication signals with a mechanical oscillator that is very similar. In comparison with commercial modulators, this already works with a very high efficiency and in both directions – which is very important for our application in quantum mechanics. However, this component has a very small bandwidth – slow communication is only possible – and it adds a lot of noise to the signal during the conversion. Interwoven optical microwave fields are therefore not currently possible. But we’re working hard to change that.”

The scientist wrote his master’s thesis on quantum theory back in 2007 at the Physics Institute of the University of Vienna and has consistently continued this research ever since. He obtained his PhD from the Physics department at ETH Zurich, where he also completed a postdoc (2006-2012). This was followed by a research residency at the California Institute of Technology (Caltech) in Pasadena, CA (2012-2017). Since 2016, Fink has been conducting research at the Institute of Technology (IST) Austria, near Vienna, where he heads the Integrated Quantum Systems group.

More about quantum mechanics in these Innovation Origins articles here.