Ever since she was very young, Jennifer Wichers had been in training every day to win an Olympic gold medal in judo. She recently had to let go of that dream. She is still busy with judo, albeit more as a metaphor for entrepreneurship. Her company stems from her graduation thesis which won her the 2016 Sport Innovation Prize at the Hanze University of Applied Sciences in Groningen in the Netherlands.

“My life was dominated by judo. I strove every day to improve as a judoka,” Wichers explains. “You are constantly analyzing yourself. What can I do better? Who do I need around me in order to make progress? – Physical therapists, mental coaches, technique trainers, strength trainers? It’s essentially a never-ending puzzle. Which is also quite nice.”

She came very close. At the age of fourteen she won gold at the Youth Olympic Games. This was the basis for her judo career. She competed for a long time on an international level after that. She won numerous European and international medals. But besides all of that, she also suffered a lot of injuries on both her shoulders, her ankle ligaments and an elbow. In 2016, a spiral fracture in her middle finger threw a spanner in the works for the 2020 Games.

She then spotted opportunities in the field of entrepreneurship during her search for a subject that she could connect judo to. Wichers explains that in the past articles had been published on judo economics. Based in part on using judo as a metaphor for how you can actually use the weight of a larger competitor against themselves. As an example, look at how a large organization is less likely to adapt to changes than a smaller one. “Yet there wasn’t really a connection with entrepreneurship at that time.” That’s where she found her new challenge: judo as a metaphor for entrepreneurship. 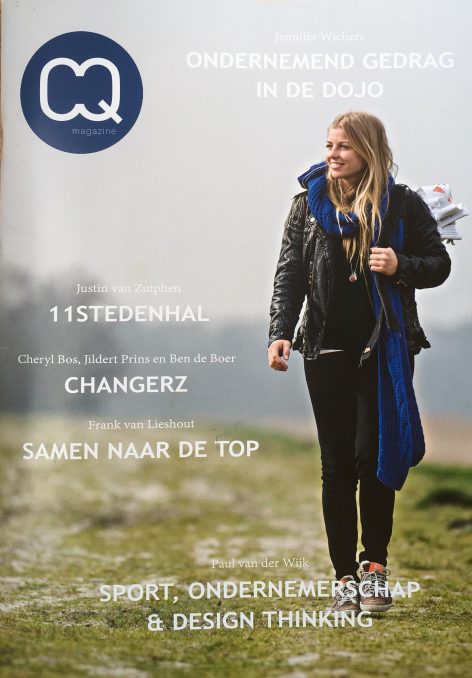 “I had to diversify into another branch of sport and that’s where I met quite a few challenges. From time to time my thesis supervisor threw me into the deep end. That was great, it cleared the way for me to delve more deeply in different ways.” Wichers managed to get through this and she succeeded in completing her research which she subsequently won a prize for. She also wrote a scientific article about her research which has since been published.

After graduating, Wichers started her own company – Judo Your Business. She gives workshops and corporate training. “In my courses, I teach you how to apply the practical language of judo and the philosophy behind it to your own work and your organization. This can vary per organization.  Someone may have a question about cooperation, another about giving feedback to each other, and somebody else wants to know how you can do more within a team or on the job. As I adopt a different approach, which is theoretically substantiated, it can produce very surprising results.” The other approach I use starts out with the judo suit that you put on and ends up on the tatami (the judo mat). “I don’t know how you are with your colleagues, but in a lot of companies you just don’t get into each other’s comfort zone that easily. We do that here, but we build it up very slowly.”

“In judo, you have, amongst other things, leverage techniques that allow you to make certain moves much more efficiently. Which saves you a lot of effort.  The participants can also transfer that to their companies. Because people are going to practice and apply that and see and feel the difference, I get reactions like: ‘Wow, I didn’t expect that.'”

Aniek Ouendag, coordinator of VentureLab North at the University of Groningen, took part in Wichers’ workshop with her team two months ago. Over the past five years, the team has grown from three to fifteen employees. “That is quite a transformation. We wanted something else than just talking to each other during a strategy day. That makes you feel a tad stupid.” Ouendag knows Wichers from the entrepreneurial environment in Groningen and suggested taking a ‘judo workshop’. “You really start thinking differently about your work. You also start talking to each other differently. Because if you’ve done judo with each other, you can talk about it with each other afterwards.”

From judo to management

What Ouendag likes is how Wichers has translated judo into business practice. “The most important thing I’ve learned from this is that by moving with each other, you can get things done. That you don’t always have to compete against someone. That in itself makes sense, but because you actually get to do this in a physical way, I now see it differently.”

Ouendag primarily applies judo techniques in her conversations with entrepreneurs. “Some are mainly specialists when it comes to their products and don’t yet see the point of having an in-depth knowledge of business management. I then tell them that, as experts, they could mislead someone who has no knowledge of their product. But an accountant might do that to them as well. That way I try to get them to understand that they have to deal with more aspects of business management than just product development.”

Wichers is part of a solid tradition. The Japanese Kanō Jigorō brought this new martial art judo to life at the end of the nineteenth century. Kano wanted to introduce more ethics into the sport. He thought winning a match was trivial. According to him, it was only of limited value if you couldn’t apply it in everyday life.

Move to live: how Move to Be wants to get the country…
'The best scientists also have start-ups'
'Universities should build a Silicon Valley around…
TrueSim launches realistic simulation training with virtual…
Holland High Tech is cashing in on opportunities for the…
Former top athlete Mark Snijders (AZ) invests as first Dutch…