Without phosphorus there would be no life as we know it. The mineral is present in our DNA and cell membranes and is an important building block for our bones and teeth. Besides calcium, phosphorus is the most common mineral in our body and it provides the cells with important energy. Scientists have long been trying to solve the mystery of how and where it came to Earth. A group of international astronomers has now used the new results of the Atacama Large Millimeter/Submillimeter Array (ALMA) and the ROSINA-InstrumeAstronont on board Rosetta (Rosetta Orbiter Spectrometer for Ion and Neutral Analysis) to trace the origin of phosphorus from star-formation regions to comets.

This revealed where phosphorous-containing molecules are formed, how they get into comets, and how a particular molecule may have played a crucial role in the beginning of life on our planet: phosphorous monoxide. “Life appeared on Earth about four billion years ago, but we still don’t know what processes produced it,” says Dr. Víctor Rivilla, a researcher at the Arcetri Astrophysical Observatory of INAF, Italy’s National Institute of Astrophysics. 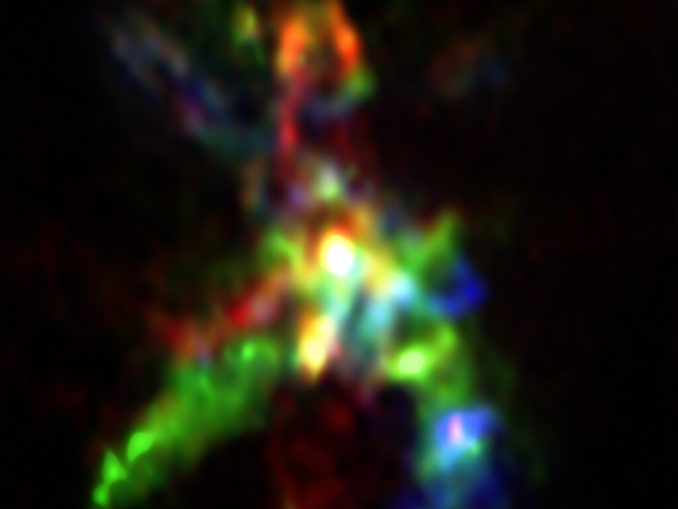 This ALMA image shows a detailed view of the star formation region AFGL 5142, with a bright, massive star in the center of the image. The gas flows of this star have opened a cavity in the region, in the walls of which phosphorous-containing molecules such as phosphorus monoxide have formed (shown in color). The different colors represent material moving at different speeds. © ALMA (ESO/NAOJ/NRAO), Rivilla et al.

Phosphorus has long been suspected in star-forming regions

Thanks to ALMA, the researchers were able to take a detailed look at the star formation region AFGL 5142 and show where phosphorous-containing molecules such as phosphorus monoxide are formed. Since new stars and planetary systems are born in cloud-like regions of gas and dust between the stars, these regions are ideal places for astronomers to search for the building blocks of life. “Years ago, people were already talking about phosphorus in star-forming regions,” says Dr. Markus Nielbock of the House of Astronomy in Heidelberg.

Next, they searched for traces of these phosphorus-containing compounds in the famous comet 67P/Churyumov-Gerasimenko – and found them. When the cavity walls collapse to form a star, especially one less massive than the sun, phosphorus monoxide can freeze out and become trapped in the icy dust grains that remain around the new star, the researchers say. Even before the star is fully formed, these dust grains come together and form pebbles, rocks and eventually comets that become transporters of phosphorus monoxide. 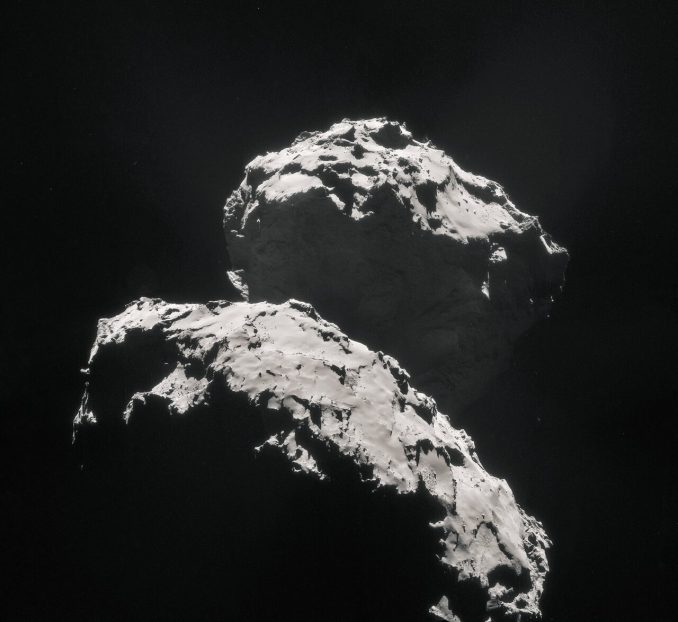 Mosaic of comet 67P/Churyumov-Gerasimenko, created with images taken on 10 September 2014 when ESA’s Rosetta spacecraft was 27.8 km from the comet. © ESA/Rosetta/NAVCAM

After astronomers had found indications of phosphorus in the ROSINA data, ROSINA collected data from 67P for two years. However, the scientists did not know which molecule had carried the phosphorus there. At a conference, the lead researcher of Rosina and author of the new study, Prof. Kathrin Altwegg, was given an indication of what this molecule could be. “She said that phosphorous monoxide was a very likely candidate, so I went back to our data and there it was!”

Once astronomers have discovered phosphorus monoxide on a comet, they can establish a link between the star-forming regions where the molecule is formed and Earth. “The combination of the ALMA and ROSINA data has revealed a kind of chemical strand throughout the star formation process in which phosphorous monoxide plays the dominant role,” says Rivilla, lead author of the new study published today in the Monthly Notices of the Royal Astronomical Society.

Nielbock emphasizes that future research will now be able to specifically search for phosphorus. “It may well be that many groups will now jump to take another look at all these star-forming regions. It could be that this was just a coincidence and it’s only happening there, and only under these conditions.” It would then be necessary to investigate in more detail what conditions must be present in order to keep phosphorus in such a way that it can be used for the development of life on planets.

“In my opinion, there is no question that phosphorus must be there, since it is something that was produced by earlier generations of stars,” says the researcher. “But that it can now be proven in the form of such oxygen and nitrogen compounds, that’s something new. It could well be that these molecules are helpful in that it can be much better incorporated into certain elements in such dust grains that later grow into these comets.” 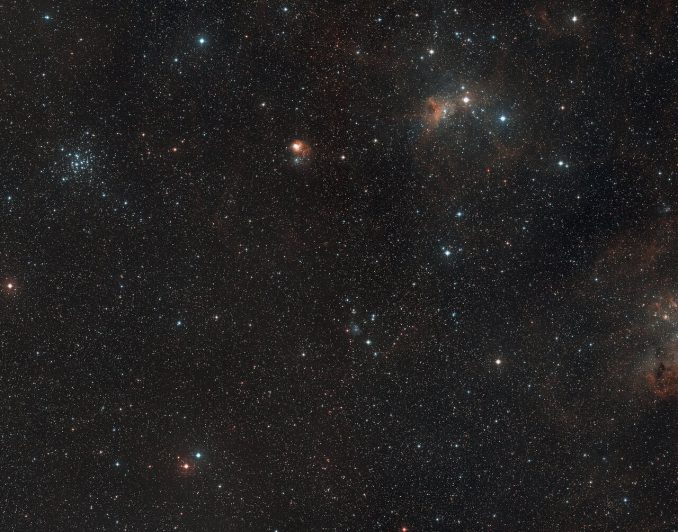 This wide-angle view shows the region of the sky in the constellation Fuhrmann (Auriga), where the star-formation region AFGL 5142 is located. The image was generated from images of the Digitized Sky Survey 2. © ESO/Digitized Sky Survey 2 Acknowledgement: Davide De Martin

A building block in the study of human history

After further research, this latest discovery could once again be a building block in the study of human history. “The question already arises as to where does the phosphorus which we all have in our bodies originate, in what quantities does it come to Earth and can we deduce something from it for other planets?” says Nielbock. “Is it possible to determine from this whether the way life on Earth has developed is something typical or rather unusual?”

Therefore the next step would probably be to explore this chain, beginning with the star-forming regions, to the comets, up to planets, on which life cycles are set in motion. “This may be something that needs further study. So it’s certainly important to take a closer look,” Nielbock emphasizes. After all, Kathrin Altwegg searched for phosphorus in comets and never found it. “It was only through this combination with oxygen that she discovered it in her data. This is how this line was established, how phosphorus could have come to Earth in the first place.

“Phosphorus is essential for life as we know it,” confirms Altwegg. “Since comets most likely delivered large amounts of organic compounds to Earth, the phosphorus monoxide of comet 67P could strengthen the connection between comets and life on Earth.”

Cover photo: The infographics show the most important results of a study that has uncovered the interstellar path of phosphorus, one of the building blocks of life. © ALMA (ESO/NAOJ/NRAO), Rivilla et al.; ESO/L. Calçada; ESA/Rosetta/NAVCAM; Mario Weigand, www.SkyTrip.de

Better solar thermometer thanks to new observation of the…
Govert Schilling sheds light on one of the greatest…
In Amsterdam New-West energy cooperatives are responsible…
Bones can be constructed like prestressed concrete
‘Cancer isn’t a lifestyle disease’
Light to increase fuel cells and lithium-ion batteries'…
Manage Cookie Consent
We use cookies to optimize our website and our service. Help us to make our site better by accepting all cookies.
Manage options Manage services Manage vendors Read more about these purposes
View preferences
{title} {title} {title}